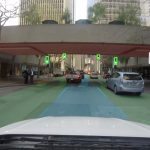 The rapid improvements made in driverless cars have in large part came about because of the quality of information available to the vehicles. Companies such as Google have mapped millions of miles of terrain to enable their vehicles to make informed decisions.

Of course, capturing this information is neither easy nor cheap, with dedicated vehicles laden with expensive sensors required to put in the legwork. A new startup aims to change that and deploy the crowd to do the job instead.

The company, called Civil Maps, aims to use regular cars to collect the data instead. The business model rests on the growing automated capabilities of premium cars today. Most come with an array of sensors to allow things like cruise control and crash avoidance, and the startup hopes to recruit these sensors to help map the terrain too.

Suffice to say, these sensors aren’t as powerful as those that are specifically designed for the task, but the team hopes that by pooling enough of them together, it will have the same effect as the various distributed computing projects that have similarly pooled lower power machines together to form supercomputers.

“I think starting in 2017-18 you’ll have a lot of cars that will meet our criteria for map contributions,” the company says.

Of course, a major challenge will be to encourage enough car companies to add the software required to capture the data from the various sensors attached to the car and make it available to Civil Maps. The company hopes that by making the data available to the car company, it will be all the encouragement they need.

It’s a fascinating approach, and the company believes it is by far the best way to make the kind of frequently updated maps that will allow safe motoring for the automated vehicles. The company has already secured a $6.6 million funding round, with investors including car giant Ford, which may be one reason why Ford was so confident that driverless cars would be on the road within five years.

The machine learning software that underpins what Civil Maps does enables them to capture data from a multitude of sensors and make sense of it in map form. The model is also capable of informing how the vehicle should respond in certain road conditions.

As with most crowdsourcing, however, the challenge is in ensuring diversity, and it will be crucial that coverage is as wide as possible for the model to work. There will no doubt be many areas that aren’t visited often by people with the kind of cars that support the approach, so it’s quite probable that deliberate mapping will be required to fill in blind spots, although the team is confident that as sensors reduce in price, they will be fitted to a much wider range of vehicles.