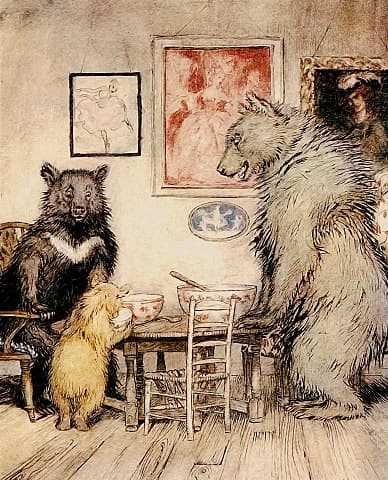 The prime, in this case, is

which has the same form as the NIST primes. Hamburg says in his paper:

I call this the "Goldilocks" prime because its form defines the golden ratio φ = 2 224.

That sentence puzzled me. What does this have to do with the golden ratio? The connection is that Hamburg's prime is of the form

The particular prime that Hamburg uses is the "Goldilocks" prime by analogy with the fairy tale: the middle term 2 224 is just the right size. He explains

Note that the first line on the right side involves four multiplications, but the bottom line involves three. Since the variables represent 224-bit numbers, removing a multiplication at the expense of an extra addition and subtraction is a net savings [2].

The most important line of the calculation above, and the only one that isn't routine, is the second. That's where the special form of p comes in. When you eliminate common terms from both sides, the calculation boils down to showing that

Hamburg chose d = -39081 for reasons explained in the paper.

Most elliptic curves used in ECC currently work over prime fields of order 256 bits, providing 128 bits of security. The motivation for developed Ed448 was much the same as for developing P-384. Both work over larger fields and so provide more bits of security, 224 and 192 bits respectively.

Unlike P-384, Ed448 is a safe curve, meaning that it lends itself to a secure practical implementation.

[1] Here we've just applied the Karatsuba algorithm one time. You could apply it recursively to multiply two n-bit numbers in O( n) time, where k = log 2 3 ≈ 1.86. This algorithm, discovered in 1960, was the first multiplication algorithm faster than O( n ²).

[2] Addition and subtraction are O( n) operations. And what about multiplication? That's not an easy question. It's no worse than O( n1.68) by virtue of the Karatsuba algorithm. In fact, it's O( n log n), but only for impractically large numbers. See the discussion here. But in any case, multiplication is slower than addition for multi-precision numbers.