So far, I have written how to customize Atom and Visual Studio Code for writers. Those posts have proven popular, and people keep asking me about my favorite text editor. This series continues now with Sublime Text, an editor I used to use when I worked as a developer, and then fell out of love with, mostly because development stopped for some time. There was much confusion between versions 2 and 3, and then I discovered Atom, and then kind of forget about it. However, Sublime Text is experiencing something of a resurgence, and I thought it was time I revisited it to see how suited it is for writers. One caveat: while Sublime core development has re-awoken, many packages haven’t. As it’s an old and stable codebase, this may not matter, and packages probably still work. I have tried only to include packages that are compatible with Sublime version 3 and have some recent development activity.

To install packages, open up the control palette and use package control to search for and add packages. 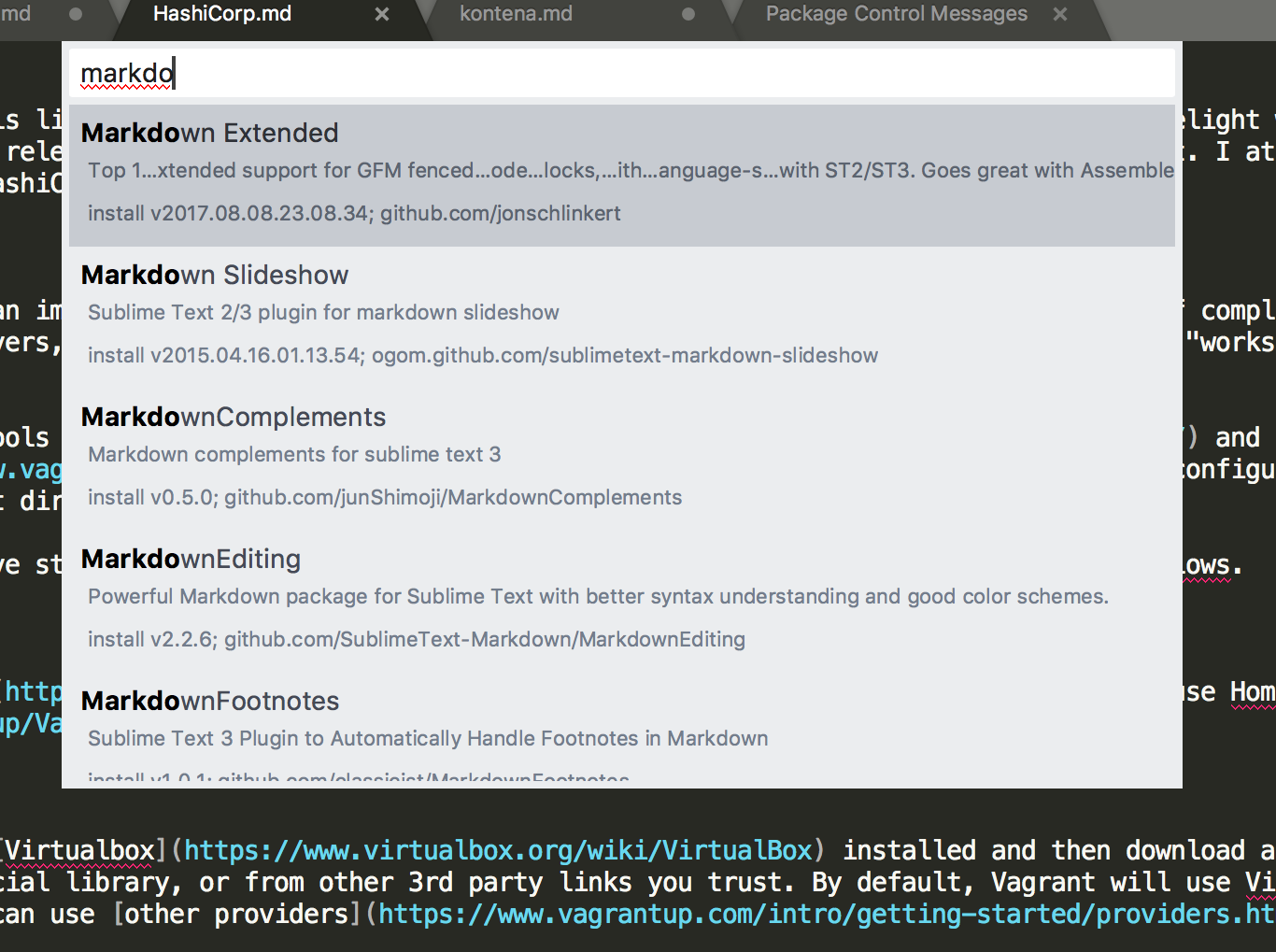 By default, Sublime highlights the current line, and your theme determines how visible this is. For further control, you might like the HighlightWords, Highlighter and WordHighlight packages.

Sublime has a handful of packages to make markdown editing better, again, finding them requires searching in package control, and again, I had mixed experiences with figuring out how to get them to work. For example, MarkdownEditing adds a light theme and centralizes the editor body, which I have always found better for writing work. It also adds a variety of shortcuts, linting, and convenience functions. Also, more useful for technical writers, MarkdownExtended adds support for YAML front matter and code block highlighting. 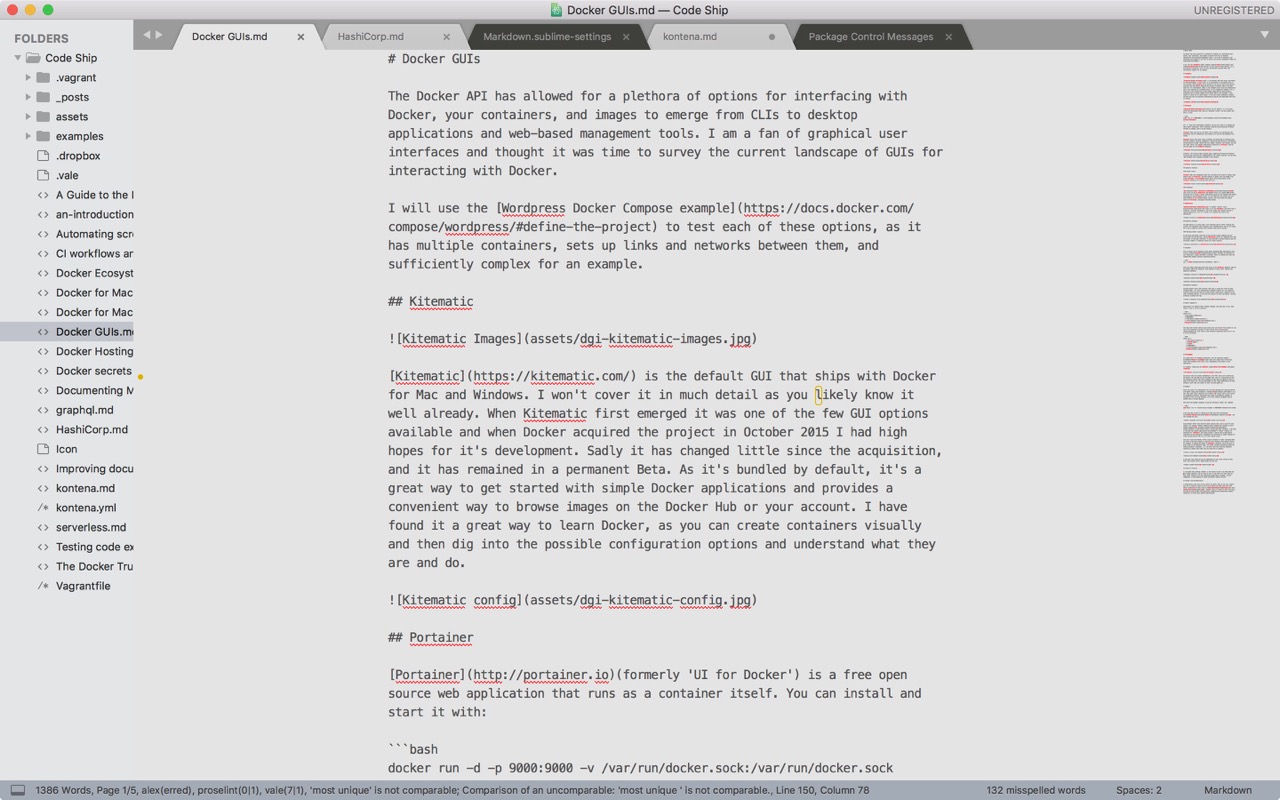 There is one package for Asciidoc, Asciidoctor. A highlighter for RestructuredText(RST) and snippets for RST

Of course, the venerable Pandoc has a package too.

There are also a whole series of ‘text manipulation’ packages, some of which I could imagine writers might find useful, such as ChangeQuotes and LineEndingsUnify.

Sublime has project management built-in, with a configuration file available to create a setup you need, and for a little more, try the ProjectManager package.

Sublime has spell checking available by default, but you need to enable it by adding the following to your user settings file:

Under the hood, Sublime uses Hunspell, and you need to download any dictionaries in addition to US and GB English. It’s a shame it doesn’t tap into the in-built Hunspell that many operating systems have.

For a word count, use the WordCount package, which also has settings for calculating read times and some advanced features. 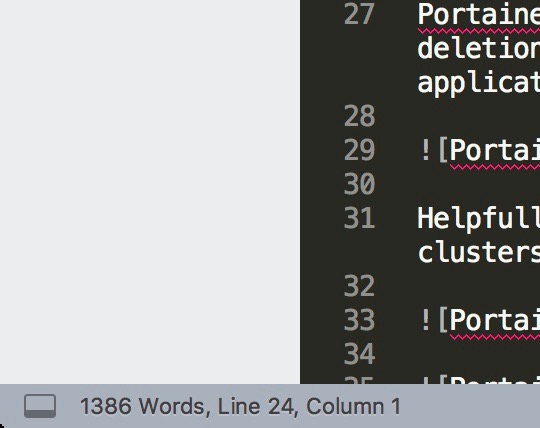 Sublime has the extensive SublimeLinter package that has a long list of official and contributed extensions (This is the best option). It’s hard to find a comprehensive list, but here’s some I found that may interest writers.

Though I must admit, I struggled to get a lot of them to work properly, the configuration isn’t always clear, and the display of linter messages isn’t as well integrated as with Atom and VSC.

If you want to lint code snippets included in your documentation, then there are options available for pretty much every language, but again, your mileage may vary using them.

Should I Use It, Chris?

One of the reasons people still prefer Sublime over Atom and VSC is performance. Sublime is written in Python and not JavaScript, and thus consumes less memory and CPU. I didn’t use it enough to prove or disprove this statement, but after a brief look at Activity Monitor on my Mac, CPU usage is generally lower than either of those editors, but not as much as I would have expected. A lot of the CPU spikes are caused by packages and their dependencies though, and this is the same across all the editors.

Hmm, frankly, I would say no. If you are already using Sublime and understand how to get it to work in a more user-friendly way, then adding some writer focused packages enhances your experience. But for writers looking for new options, then Atom and Visual Studio Code are far better and more modern, and so are the packages available for them.

Lint, Lint and Away! Linters for the English Language