how does it eventually come to outbursts in communication? it’s the accumulated tension, and it depends on how long we can keep on living with it. when we shove misunderstandings under the rug, we are adding power to the disastrous flow. it looks as if the inlets of smaller tensions amplify the cumulative power of the negative flow, making it so powerful that it eventually breaks the dams of self-control. 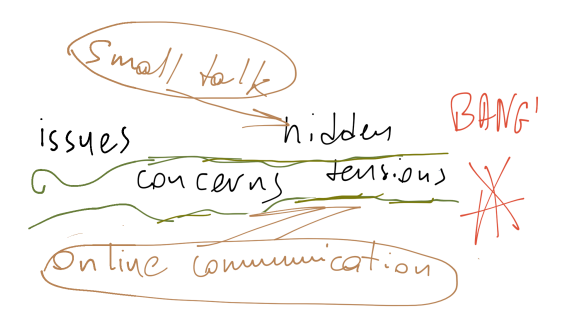 this looks too simple, but it appears that people very often forget about simple things as they end up cleaning up the debris of massive misunderstandings in their teams. this might be especially true if, for one reason or another, they mostly communicate online. some research has been done proving that communication on the web makes people feel more alienated and less connected. but we live in a world where we often need to communicate online, especially in distributed teams. the general recommendation here would be to talk in person wherever possible, with video turned on, and dissipate the negative effects of online communication into the bubbles of human warmth and empathy. that’s why using any opportunity to talk in person, in a non-formal surrounding, would be a very simple but surprisingly helpful practice. for that reason, smart stakeholders arrange for lounge spaces in their offices, where people can informally sit and discuss whatever needs to be discussed.

our good old “small talk” might not seem that dangerous, but it contributes to the flow of unreleased tensions. it usually occurs when people are fearful about talking about issues that are too uncomfortable for them, and as they put off this moment they waste precious time that could have been used for meaningful personal conversations. when face time is spent on pointless small talk, we leave conversations with the tension even more accumulated, and the really troublesome issues undiscussed.

the most obvious technique to render this dangerous flow of emotional tensions harmless would be using smaller ditches, to let the flow dissipate into the streamlets of talking things over right away, and prevent this tide from turning into a devastating power and breaking out in some ugly way. 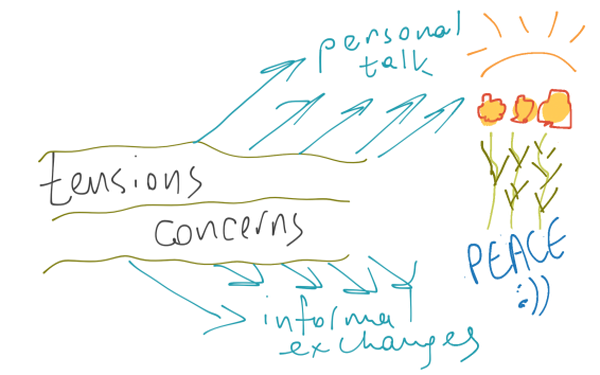 whenever you’re in a situation where something needs to be discussed urgently, set aside the fears. yielding to fears will bring along nothing else than even more fear, frustration and emotional tension. well, we’re culturally wired to be polite and well-behaved, and hence avoid touchy subjects. but it really seems that getting straight to the matter at hand, with respect and politeness, would be a better use of time and a better remedy to cope with the “lack of communication” than swallowing it all in.