in my previous post , i introduced ravendb sharding and discussed how we can use blind sharding to a good effect. i also mentioned that this approach is somewhat lacking, because we don’t have enough information at hand to be able to really understand what is going on. let me show you how we can define a proper sharding function that shards your documents based on their actual data.

we are still going to run the exact same code as we have done before:

what is different now is how we initialize the document store:

let us see how the code behaves now, shall we? as before, we will analyze the output of the http logs from execute this code. here is the first server output: 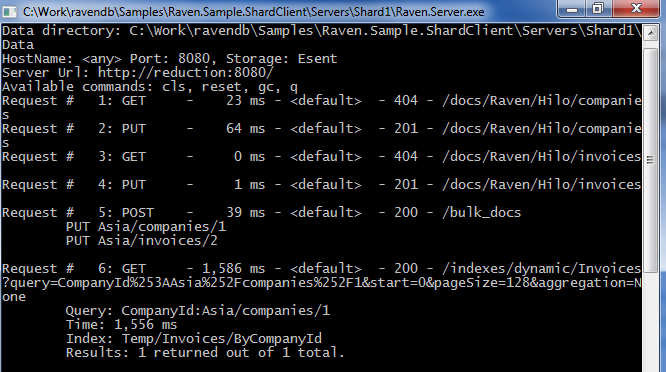 as before, we can see the first four request are there to handle the hilo generation, and they are only there for the first server.

the 5th request is saving two documents. note that this is the asia server, and unlike the previous example, we don’t get companies/1 and invoices/1 in the first shard.

instead, we have companies/1 and invoice/2. why is that? well, ravendb detected that invoices/2 belongs to a company that is associated with this shard, so it placed it in the same shard. this ensures that we have good locality and that we can utilize features such as includes or live projections even when using sharding.

another interesting aspect is that we don’t see a request for companies in the america region. because this is what we shard on, ravendb was able to figure out that there is no way that we will have a company in the america region in the asisa shard, so we can skip this call.

conversely, when we need to find an invoice for an asian company, we can see that this request gets routed to the proper shard.

let us see what we have in the other two shards.

in the second shard, we can see that we have just two requests, one to save two documents (again, a company and its associated invoice) and the second to load a particular company by id.

we were able to optimize all the other queries away, because we actually understand the data that you save.

and here is the final shard results:

again, we got a save for the two documents, and then we can see that we routed the appropriate query to this shard, because this is the only place that can answer this question.

data driven sharding for the win!

but so far we have seen how ravendb can optimize the queries made to the shards when it has enough information to do so. but what happens when it can’t?

for example, let us say that i want to get the 2 highest value invoices. since i didn’t specify a region, what would ravendb do? let us look at the code:

so we were actually able to get just the two highest invoices. but what actually happened ?

as you can see, we have actually made 3 queries, asking the same question from each of the shards. each shard returned its own results. on the client side, we merged those results, and gave you back exactly the information that requested, across the entire cluster.