In Relational Data Models, we model a relation/table for every object in the domain. This is not exactly the case in Cassandra. This post will elaborate more on the aspects we need to consider while doing data modeling in Cassandra. The following is the rough overview of Cassandra Data Modeling.

As we can see from the diagram above, Conceptual Data Modeling and Application Queries are the inputs to be considered for building the model. Conceptual Data Modeling remains the same for any modeling(Be it Relational Database or Cassandra) as it is more about capturing knowledge about the needed system functionality in terms of Entity, Relations and their Attributes(Hence the name – ER Model).

Consider the following example about a Pathology lab portal. This Pathology Lab Portal enables labs to register themselves with the portal that agrees to conduct all the tests suggested. Also, it allows patients(users) to register with the portal to book test appointments with the lab of his/her choice. Here is a relevant portion of the conceptual model that will be considered for data modeling in Cassandra: 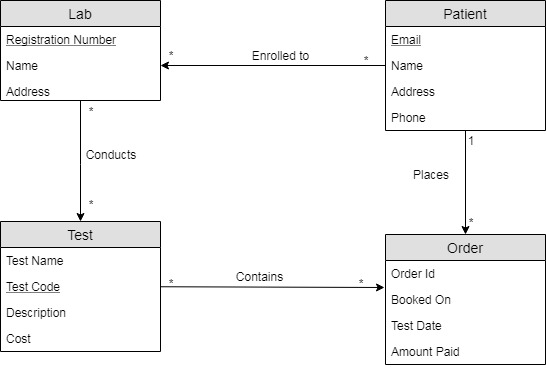 Data modeling in Cassandra is query driven. So, the next step is to identify the application level queries that need to be supported. For the example taken up, here is the list of queries that we are interested in:

Mapping Rules: Once the application queries are listed down, the following rules will be applied to translate the conceptual model to a logical model.

From the conceptual model and queries, we can see that the entity ‘Lab’ has been used in only Q1. As Q1 is equality-based, only Rule #1 can be applied from the Mapping rules. So the ‘Lab’ table can be designed as follows:

Entity ‘User’ has been used in Q3. The query specifies to fetch user details by either email id or phone number. In relation databases, we could have created a single user table with one of email id/phone number as identifier. If the data is huge in the table, then an index can be created on the non-identifier column to speed up the data retrieval. But in Cassandra, this is modeled in a different way. We can use 2 tables to address this:

Secondary indexes can be used when we want to query a table based on a column that is not part of the primary key. But one has to be careful while creating a secondary index on  a table. They are not recommended for many cases:

As we can see that Secondary indexes are not a good fit for our user table, it is better to create a different table that meets the application purpose. Note that data duplication is quite common in Cassandra data modeling. But we should have a limit on how much data we are willing to duplicate for performance reasons. Now the problem with creating different tables is that one needs to be careful of possible Data consistency anomalies.

Although Cassandra does not support referential integrity, there are ways to address these issues – Batches and Light Weight Transactions (LWT). Note that batches in Cassandra are not used to improve the performance as it is in the case of relational databases. Batches here are used to achieve atomicity of operations whereas asynchronous queries are used for performance improvements. Incorrect usage of batch operations may lead to performance degradation due to greater stress on coordinator node. More on this here.

LWT can be used to achieve data integrity when there is a necessity to perform read before writes(The data to be written is dependent on what has been read). But it is said that LWT queries are multiple times slower than a regular query. One needs to be extra careful when using LWTs as they don’t scale better.

Another way of achieving this is to use Materialized views. They address the problem of the application maintaining multiple tables referring to the same data in sync. Instead of the application maintaining these tables, Cassandra takes the responsibility of updating the view in order to keep the data consistent with the base table. As a result, there will be a small performance penalty on writes in order to maintain this consistency. But once the materialized view is created, we can treat it like any other table. Now that we have an understanding of views, we can revisit our prior design of users_by_phone:

Note that the ‘is not null’ constraint has to be applied on every column in the primary key. So we have addressed Q1 and Q3 in our application workflow so far. We are now left with Q2 and Q4:

Order details have to be fetched by the user in one case and by the lab in another case. In Relational Databases, we would have modeled Order, User, and Lab as different relations. Q2 and Q4 can be achieved on these relations using JOIN queries on reading data. This has to be modeled in Cassandra differently as read level joins are not possible.

Data denormalization has to be done to achieve this use case. As part of denormalization, data gets duplicated. But as discussed briefly earlier, one of the thumb rules in Cassandra is to not see Data Duplication as a bad thing. We basically trade off over space compared to time. For the following reasons,

Cassandra prefers join on write than join on read.

A general recommendation from Cassandra is to avoid client-side joins as much as possible. So we model the ‘Orders’ entity from the Conceptual model using a table (orders_for_user) and a view (orders_for_lab) in Logical Model as done earlier. Mappings Rules #1 (Equality based attributes: user_id) and #2(Range based attributes: booking_time) have to be considered for creating a table that supports Q4. Columns order_id and test_id are added as part of the primary key to support the uniqueness of the row.

Similarly, the view can be modeled considering Mapping Rules #1(Equality based attributes: lab_id) and #3(Clustering order for attributes: booking_time)

One last point to be considered is when modeling data is to not let the partition size grow too big. A new field can be added to the partition key to address this imbalance issue. For example, if some labs are getting too many orders compared to others, this will create imbalanced partitions thereby distributing more load to a few of the nodes in the cluster. To address this issue, we can add a bucket-id column that groups 1000 orders per lab into one partition. The load is distributed equally among all nodes of the cluster in this way.

Published at DZone with permission of Prasanth Gullapalli. See the original article here.