at scalapeño this year, i argued in my keynote speech that the best and most unique parts of scala are the ones suited to functional programming, including traits (when used for type classes, modules, and sum types), case classes (when used for product types), higher-kinded types, dot method syntax (which is useful for method chaining and namespacing), and various features of scala’s type system.

in the twitter aftermath that followed, i further argued that object-oriented programming — by which i mean inheritance hierarchies (typified by the scala collections inheritance hierarchy) and subtyping (beyond its use for modeling sum types, modules, and type classes) — isn’t useful. that is, it doesn’t have any real world practical benefits over functional programming.

some claimed without supporting evidence that scala’s embrace of object-oriented programming helps working programmers solve real problems. to settle the issue once and for all (at least for some people), i issued the following public challenge: 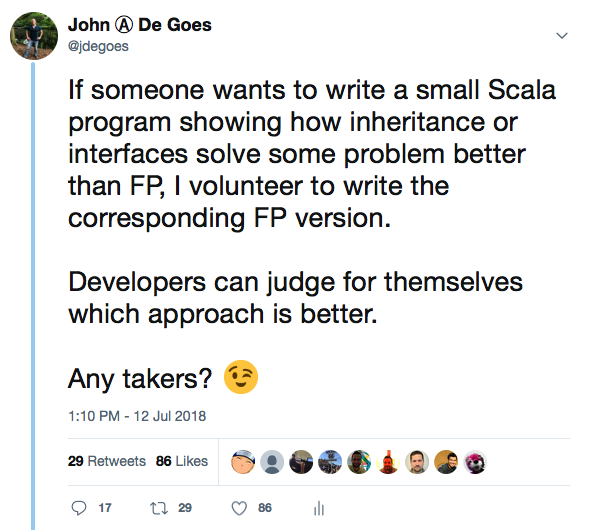 in a world of millions of object-oriented programmers, i received a grand total of 3 responses (!).

in this blog post, i’ll look at one of the responses and show how you can solve the same problem using standard techniques from functional programming. then, every reader can decide for themselves whether oop adds anything of value to what i have defined as the good parts of the scala programming language.

the first response to my challenge was a problem in data modeling by christopher hunt , a veteran of lightbend:

this example uses inheritance, not for type classes, modules, or sum type emulation, but to provide the following benefits:

let’s take a look at how functional programming can provide us with these same benefits, without the use of inheritance.

in functional programming, we might choose to naively model this problem with a single sum type:

we could regain this guarantee with classy lenses, but we don’t need anything as fancy as that: we just need to take advantage of the full power of algebraic data types to remove the duplication in our current data model.

in any case, where we have a sum type, whose terms share a common piece of data, we can apply a refactoring: we can extract a new product type with the common data and push the sum type deeper as another term of that product.

in this case, our event id is the common piece of data, so we can extract a product type that includes both the id and a new sum type that captures differences between different events:

this demonstrates simple refactoring. now, let's us not just vary the payload depending on the type of event, but let's have a compile-time guarantee that all events share common data.

the new data model is squeaky clean and contains no logic, which is better reserved for type classes because it’s far more flexible and precisely models the problem domain!

while developers can argue which approach they prefer, it’s clear the object-oriented solution has no benefits over the functional programming solution.

stay tuned for other posts in this series, where i look at other challenges problems. and, if you have some small, self-contained example and wonder how to do the same thing in functional programming, please post it in the comments below!