There are over 50+ tools and solutions available in the market for performance testing your application and services. Now it is time to check out Ddosify, a high-performance load testing tool that offers free and commercial features to test web applications and services over HTTP(S), HTTP/2, and other protocols are on their way. In this blog article, let us deep-dive into the Ddosify tool and see whether it satisfies a typical performance engineer or not.

Before we see Ddosify, let us try to understand the name of the tool. Ddosify contains Ddos term. DDoS stands for Distributed Denial of Services. Below is the Wikipedia entry for Denial of Service:

In computing, a denial-of-service attack is a cyber-attack in which the perpetrator seeks to make a machine or network resource unavailable to its intended users by temporarily or indefinitely disrupting services of a host connected to the Internet.

If you try to fit the DDoS capabilities for good intent, you will get Ddosify.

Ddosify is a high-performance load testing tool written in Golang. It comes in two flavors: open-source and commercial.

As Ddosify is Golang based, the prerequisite is to install the latest and most stable version of Golang if you want to build from the source.  Otherwise, you can download the binaries to get started. Head to https://golang.org/dl/ to install the Golang.

To install Ddosify, you can leverage Docker or install it from the source.

After successful installation, you can verify Ddosify by issuing the below command.

Let us start a quick load testing, targeting the demo app. I am running a sample Jetty app locally on port 8080. To begin the testing using Ddosify, you can issue the below command.

The above command sends 100 requests in 10 seconds. Below is the output. During the test, Ddosify displays the status runtime. Once the test is done, it will display the results with DNS, Connection, Request Write, Server Processing, Response Read time, and Total time in seconds.

To terminate the test, you can press Ctrl + C. 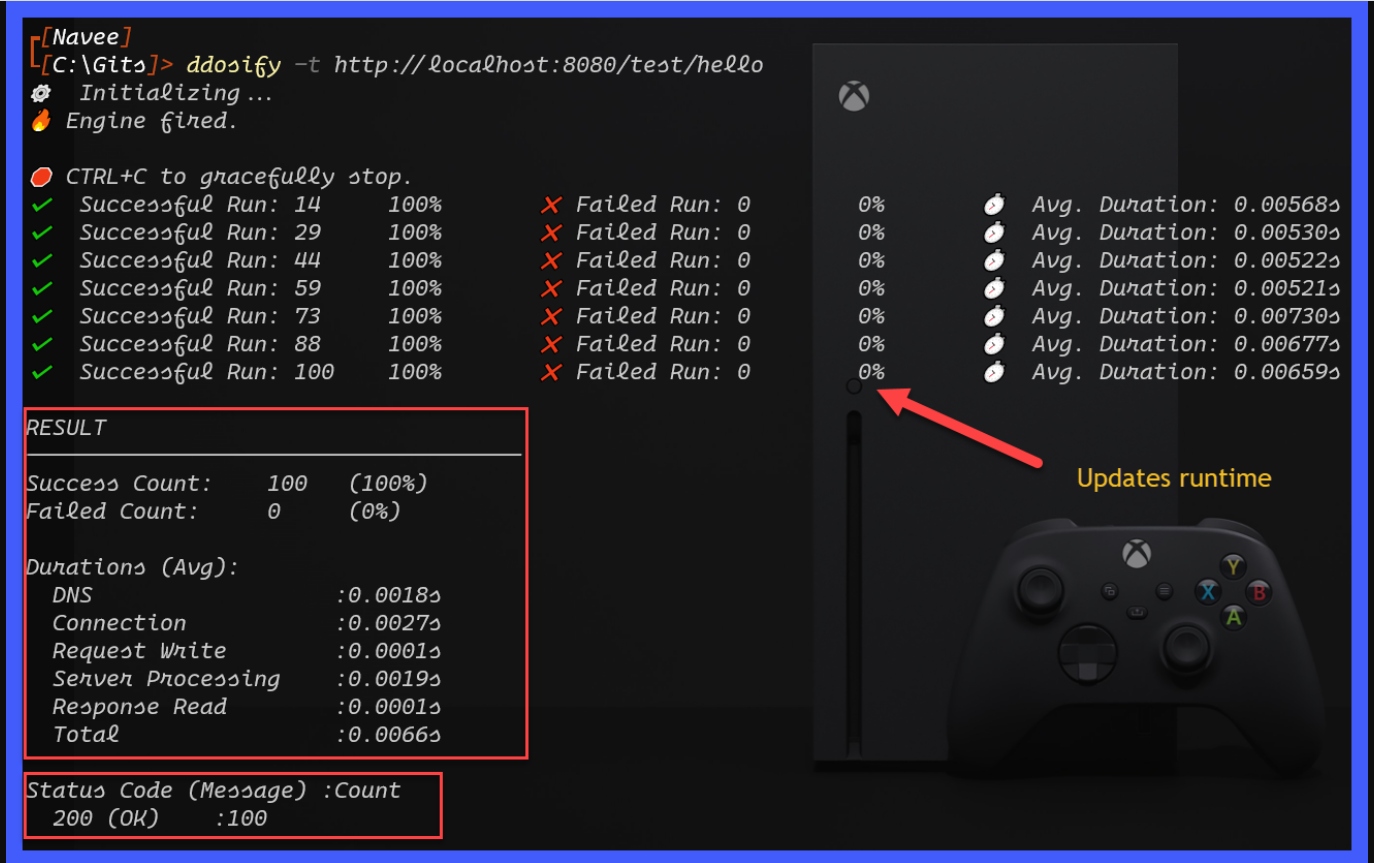 Now let us design a quick scenario to test the demo app in JSON. Copy and paste the below JSON and save it as config.json.

The above scenario throws 20 requests (iterates) over the period of 5 seconds. Below is the output. 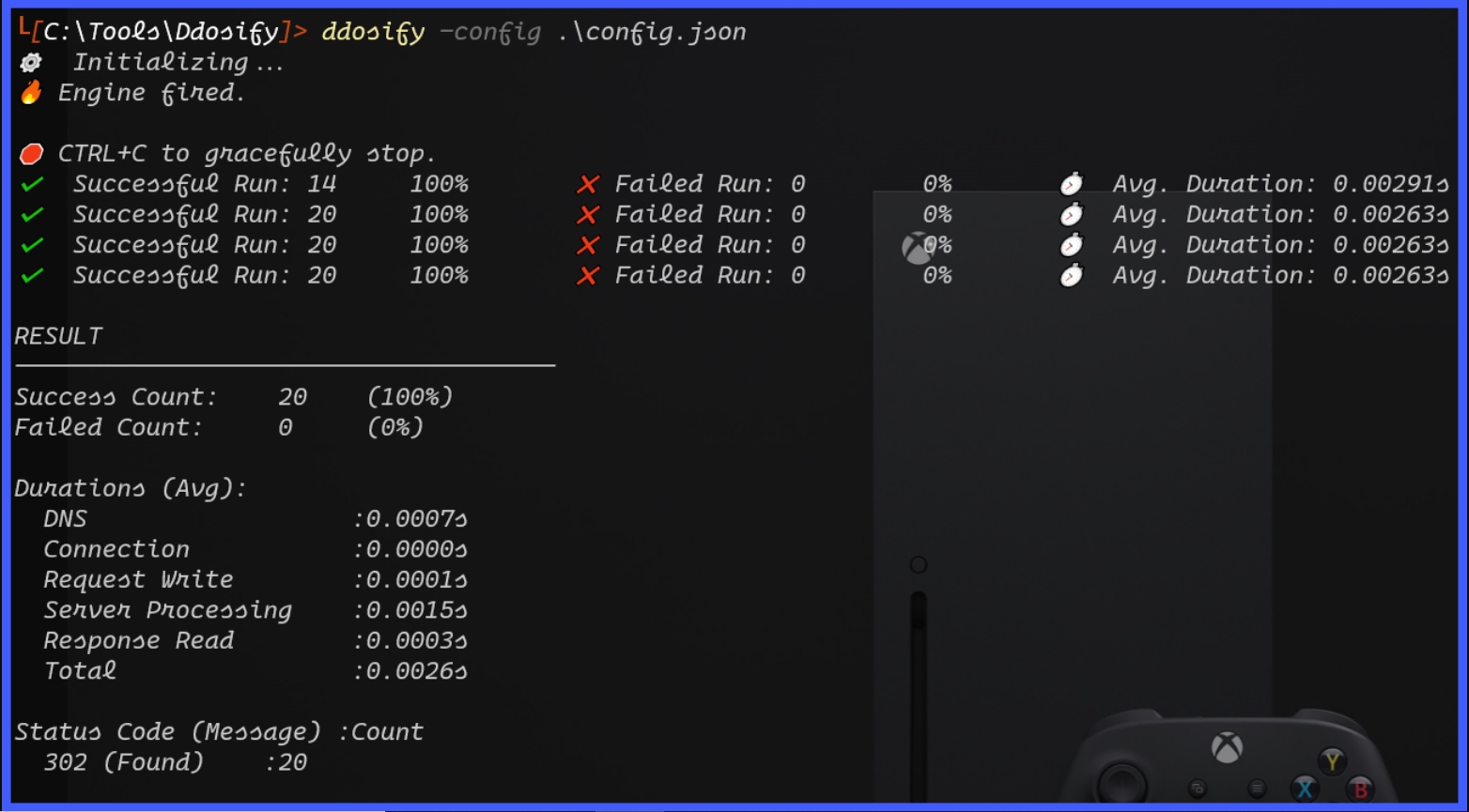 Below are the various flags available for Ddosify at this time of writing.

How Many Requests You Can Send From Your System?

To determine how many requests you can generate on the system purely depends on the CPU, memory, and other parameters. You need to run benchmark tests and conclude your findings.

I have two cores with 16 GB RAM. Golang is based on a lightweight thread managed by Go runtime called goroutines. Golang has better concurrency than other languages. You can easily spin up hundreds of threads using minimal resources.

I executed a test with 10000 requests. As you see, the load is proportional to the time. 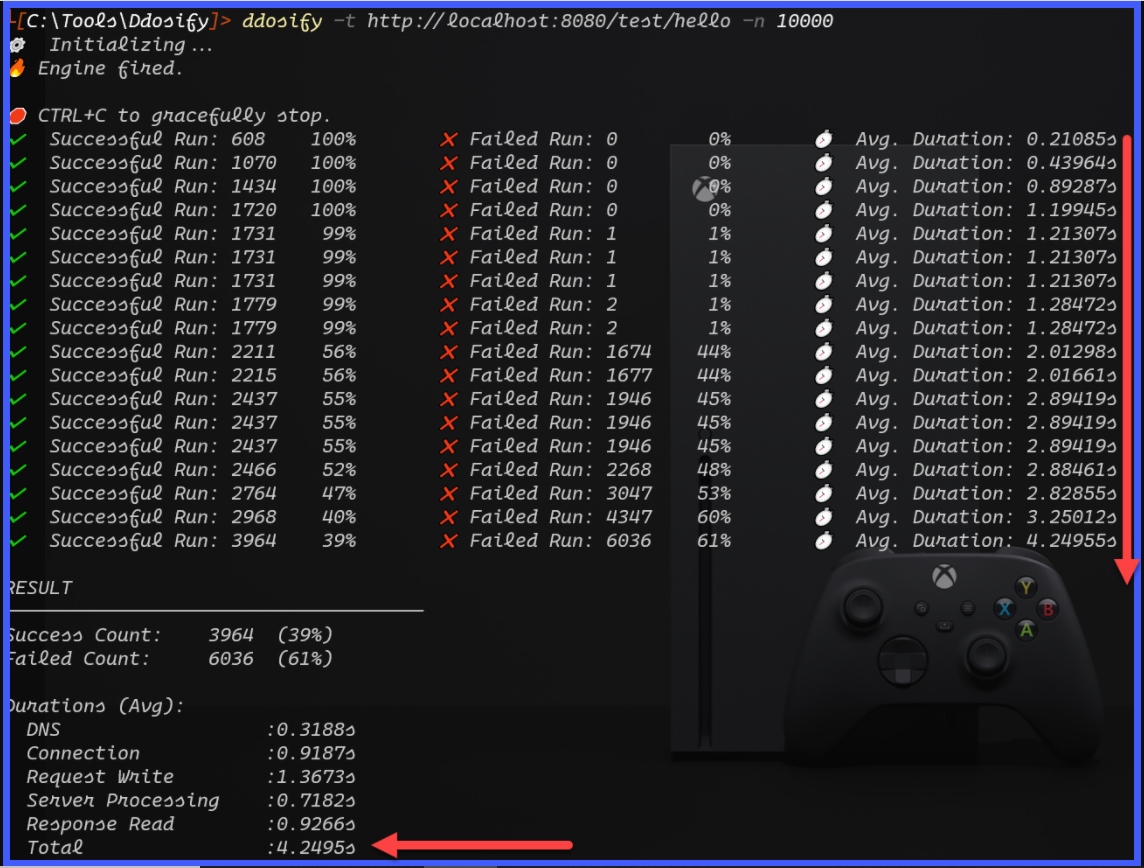 When I injected with 10000000, I observed high CPU and memory on ddosify.exe and the test took a long time to complete. I have to terminate the exe file. It is not a DDosify issue, it is my system configuration. I have an under-powered config, which cannot be useful for running a very high load.

Ddosify might be a good fit if you want to run a very high load quickly with minimal configuration. It is still in the very early stages, and a lot of features are missing (parameterization, logical actions, scripting to name a few). The commercial version is yet to be released. I am on the waiting list. I hope the Ddosify team will develop the features which will satisfy typical performance engineers eventually. I urge you to try Ddosify to ddosify your app.