A dead hard drive can result in permanent loss of data, which could be worth sizably more than the storage hardware. This draws from the fact that over the past 5–7 years, hard drives’ storage capacity has increased significantly, while their costs have come down to as low as $40 for a 1 TB drive. Today, it’s common for even individuals to have 4 TB hard drives for storing or backing up critical data for long-term use.

Imagine if your hard drive, storing terabytes of precious data, fails and turns out dead! You could lose your lifetime's worth of digital files like family get-togethers and outing pics, Junior’s baseball game video, crucial project data, and whatnot. The situation looks terrifying, and it is incredibly hard to tackle— how do you deal with a dead hard drive and recover your data?

Let’s go over the basics first.

What Counts as a Dead Hard Drive?

Sometimes, you may find that your laptop or MacBook cannot detect an external hard drive hooked through a USB port. The problem persists even after switching the ports or restarting the system. Attempting to connect the hard drive via a powered USB hub doesn’t help either. Now exasperated, you decide to have a closer look, and find that the hard drive has no sign of life! There appears no indication of the platter spinning movement, and the hard drive LED (activity light) doesn’t blink.

Whoa, you just discovered a dead hard drive with tons of your valuable data locked inside it!

To understand the difficulties you might face with dead hard drive recovery, it would help to first know the circumstances leading up to the situation.

Why Does a Hard Drive Turn Out Dead?

There could be several causes of hard drive failure, ranging from a faulty printed circuit board (PCB) and a large number of bad sectors to a damaged head assembly. These causes invariably lead to a “physically crashed," or dead, hard drive.

A good thing to know is that regardless of the underlying reasons for hard drive failure, you could spot the disaster reasonably early if you’re aware and attentive. In that case, you might be able to rescue your data just in time. We cover the telltale signs of a failing hard drive soon, but before that, here’s a run-through of why a hard drive may turn out dead.

The Printed Circuit Board (PCB) calibrates and controls the intricate movements of the read/write head assembly and spinning of the hard drive platter that stores the data. A PCB may malfunction due to excessive heat (power surge), manufacturing defects, mechanical impact or shock, liquid spillover, normal wear & tear, etc., resulting in a dead hard drive. 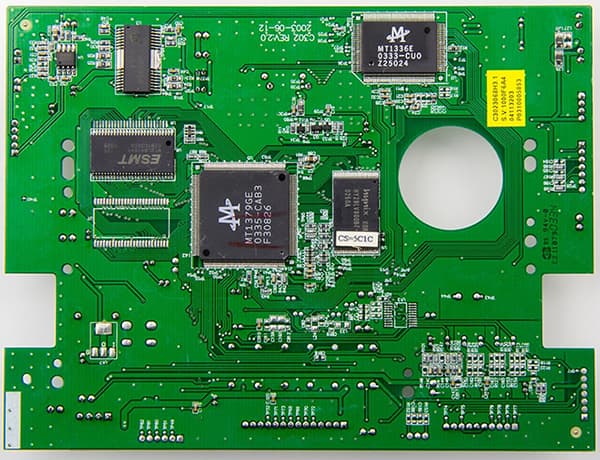 Hard disk drives store data on millions of storage units or clusters, called sectors, distributed on the platter (or disk). Sometimes, a sector may fail to respond to a read/write command due to a manufacturing defect or wear and tear, and it is called a bad sector. Data stored on bad sectors is gone forever, and the hard drive marks such sectors as unusable. 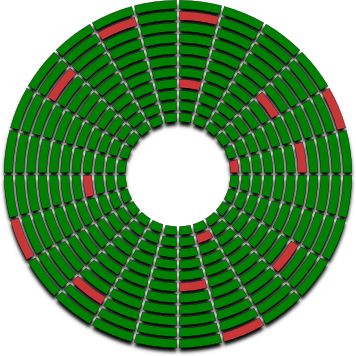 Hard drives with a large number of bad sectors are at risk of failure and can turn out dead. Notably, there are physical (or hard) bad sectors that are permanent and logical (soft) bad sectors you can fix and reuse.

The hard drive head is responsible for writing (storing) data on the platter and reading it at your command. The head floats elegantly over the platter, maintaining a tiny gap measuring less than 5 nanometers— a human hair is about 80,000 nanometers wide! 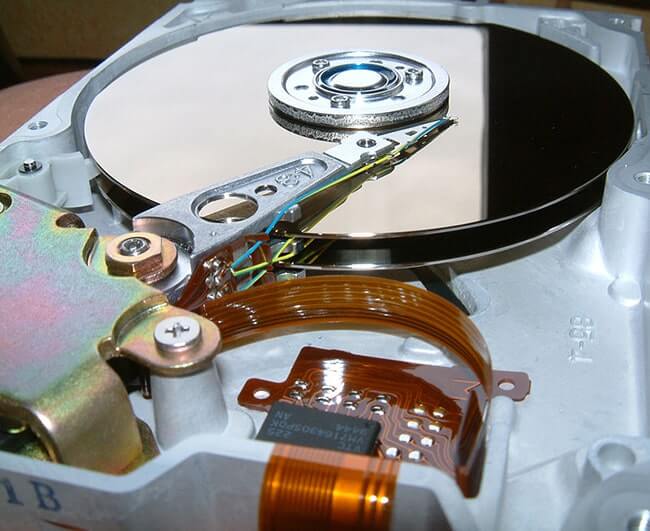 Several reasons could disturb this intricate balance, like physical shock or mishandling, culminating in a damaged head or scratches on the platter. Nonetheless, the situation invariably results in a physically crashed or dead hard drive.

Spot a Failing Hard Drive Before It Dies

There are several telltale signs you need to look for in a physically failing hard drive. You might be able to save your precious data before you are left with a bricked hard drive. Here are some of the common signs of a failing drive:

A failure-prone hard drive starts making an incessant "clicking" sound or might beep at intervals. The click sound, also called the click of death, occurs due to the repeated movements of the read/write actuator arm when it fails to move or read the platter correctly. Beeping can also happen if the drive isn’t getting enough power, but you should still consider backing up your data to avoid risks of data loss if the drive fails.

Does your hard drive appear frozen, take noticeably longer to do simple copy/paste tasks, or fails to play a video it used to effortlessly? It might have gathered bad sectors that hamper the reading of the data stored on such sectors. Continued use of an already deprecated hard drive might put it under a lot of stress, risking crash and permanent data loss.

Blue screen of death or BSOD is a class of errors associated with booting problems in Windows 10 systems. In a BSOD incident, a Windows PC crashes due to abrupt termination of a critical process or hardware issues, including problems in the system hard drive. 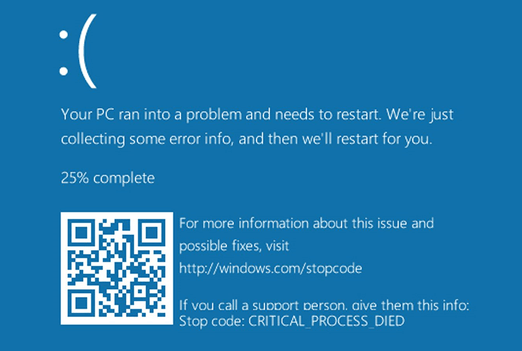 So, if you encounter a BSOD error, you might want to consider backing up the data as soon as you boot into the system. However, if you are unable to boot the system, you can use a tool like Stellar Data Recovery to create a bootable recovery media and access the hard drive of the crashed system and retrieve the data.

An overheating hard drive is a classic indication of “overwork under stress” that might happen due to issues such as faulty PCB, internal circuitry problems, poor airflow due to a choked vent, or a faulty CPU fan.   Reasons like poor hard drive health may also increase the mechanical effort of the read/write operations and can cause overheating with prolonged use.

Regardless of the cause, you need to be aware that an overheating hard drive can fail suddenly without notice. So, you must take an immediate backup.

Data recovery from a failed or dead hard drive is inherently tricky, given the fact that you need to tackle “physical failure” involving faulty components like the head, PCB, or a platter replete with bad sectors.

To have any chance of tackling a dead drive successfully, you would first need professional direction to the right course of action. Be aware that with physically failed hard drives, you get only one chance for data recovery! A mistake like attempting hit and trial methods or trying to open the drive casing can spell disaster, as ambient dust and moisture can irreversibly damage the exposed platter.

So, the crucial first step is diagnosing the dead hard drive to determine the root cause of failure, and this step demands a specialized lab environment — a facility that mimics the original manufacturing conditions for the hard drive. The lab called Class 100 cleanroom maintains optimal temperature, moisture, and extremely low air particulate levels to allow “invasive procedures” on the bare drive, removed from its casing. 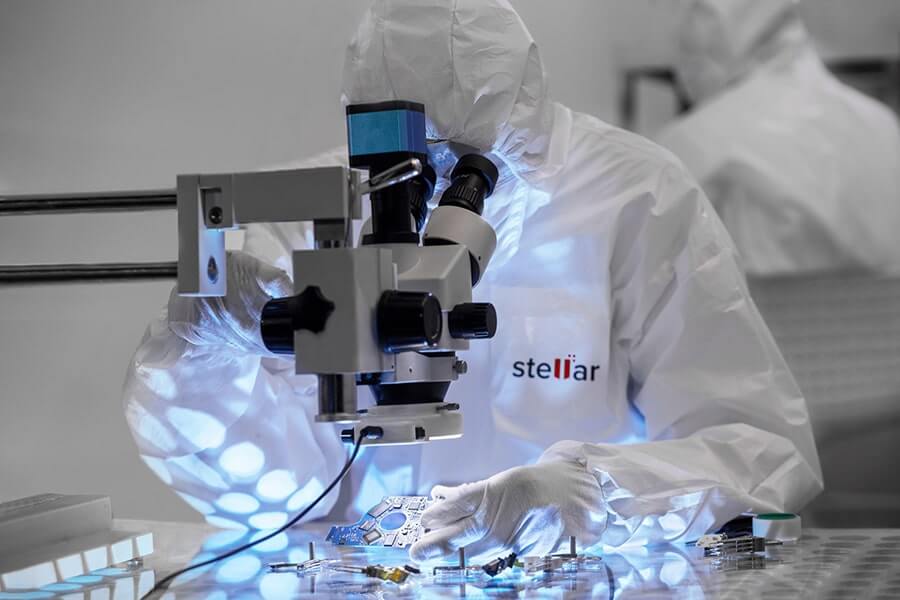 Another key challenge with dead hard drive recovery — even after you secure professional help — is the availability of replacement components and technical expertise to restore the drive for allowing data recovery. Imagine a data recovery service is able to diagnose the root cause without jeopardizing the chances of recovery; you would still need to ascertain the right components and operational know-how before you trust anybody with the colossal task.

So, you might want to choose wisely, considering that only a handful of certified data recovery companies have the documented expertise, experience, and infrastructure to pull off a task as daunting as dead hard drive recovery.