In a multi-user environment, concurrent transactions on the same set of cache entries can cause deadlocks — an unfavorable situation that adversely affects the performance of any application. Once a system enters a heavy deadlock state, recovery may require a complete cluster re-start. Keeping this in mind, Apache Ignite came up with ACID-compliant Deadlock-Free Transactions that can prevent deadlocks and enhance application performance. Before looking into this feature in more detail, let’s briefly go through the basics.

What Is a Deadlock? 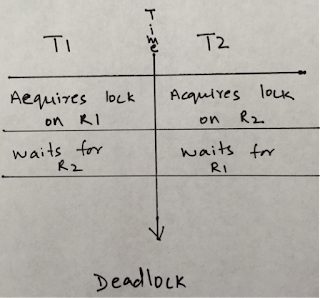 Deadlocks happen when concurrent transactions try to acquire locks on same objects in different order. A safer approach is to acquire locks in the same order; but this may not be feasible every time.

When transactions in Ignite are performed with concurrency mode -OPTIMISTIC and isolation level -SERIALIZABLE, locks are acquired during transaction commit with an additional check allowing Ignite to avoid deadlocks. This also prevents cache entries from being locked for extended periods and avoids “freezing” of the whole cluster, thus providing high throughput. Furthermore, during commit, if Ignite detects a read/write conflict or a lock conflict between multiple transactions, only one transaction is allowed to commit. All other conflicting transactions are rolled back and an exception is thrown, as explained in the section below.

The output shows that transaction t2 had a lock conflict with t1. Thus, t1 was allowed to commit and t2 was rolled back with an exception.

In a highly concurrent environment, optimistic locking can lead to a high rate of transaction failures. This is still advantageous over pessimistic locking where the possibility of a deadlock occurrence is high. Optimistic-Serializable transactions in Ignite are much faster than pessimistic transactions, and can provide a significant performance improvement to any application. Transactions in Ignite are ACID compliant ensuring guaranteed consistency of data throughout the cluster at all times.

Published at DZone with permission of Prachi Garg. See the original article here.