I’m delighted to announce that my new full-length book on Fiddler is now available. Weighing in at 330 pages, it covers every feature in Fiddler, and provides the most comprehensive available documentation of how to develop Fiddler extensions (including Inspectors, Transcoders, and IFiddlerExtensions) and build on the FiddlerCore class library. The book is available in paperback and DRM-free PDF formats.

You can learn more about the book at http://fiddlerbook.com. The site includes a link to the final Table-of-Contents, as well as all of the code samples in the book. 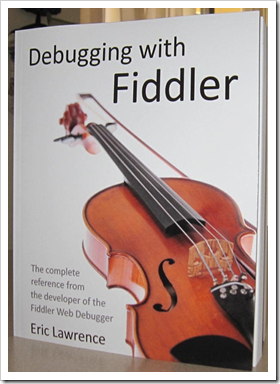 This is the first full-length book (330 pages) about the Fiddler Web Debugger. It's written by Eric Lawrence, the developer of Fiddler.

In this book, you'll learn to fully exploit the power of Fiddler to debug traffic from virtually any web-related application, including all browsers and thousands of apps. You'll see how to debug HTTPS traffic, and use Fiddler with popular devices like iPhone/iPod/iPad, Windows Phone, and others. After exploring the hundreds of built-in features, you'll learn to extend Fiddler using the FiddlerScript engine or build your own applications atop the FiddlerCore class library.

From the Table of Contents/Sample PDF;

About this book
After nearly 9 years and one hundred version updates, Fiddler has evolved into a powerful utility and platform that can perform a wide variety of tasks. It has a rich extensibility model and a community of add-on developers who have broadened its usefulness as a performance, security, and load-testing tool. Questions in email, online discussion groups, and numerous conferences over the years made it overwhelmingly apparent that most users only exploit a tiny fraction of Fiddler’s power. I came to realize that thousands of users would get a lot more out of Fiddler if there were a complete reference to the tool available. This book is the product of that realization.

As Fiddler’s developer, I’ve found it both easy and challenging to write this book. It’s easy, because I understand Fiddler deeply, down to its very foundation, and can consult the source code to research obscure details. On the other hand, it’s been very challenging, as every time I choose an interesting scenario or feature to write about, I’m forced to think deeply about that scenario or feature. Commonly, I’ve found myself developing improvements to revise Fiddler and minimize or eliminate the need to write about the topic in the first place. As a result, I’ve rewritten large portions of both this book and Fiddler itself. It’s been a slow process, but both projects have benefitted.

Publication of this book will roughly coincide with the release of Fiddler version 2.4.0.0 in the early summer of 2012. If you’re using a later version of Fiddler, you will find some minor differences, but the core concepts will remain the same.

This book is deliberately limited in scope—it covers nearly every aspect of Fiddler and FiddlerCore, but it is not a tutorial on HTTP, SSL, HTML, Web Services or the myriad other topics you may want to understand to fully exploit Fiddler’s feature set. If you want a deeper understanding of web protocols, I can recommend the references I consulted during the development of Fiddler:

This book can be read either “straight through” or you can use the Table of Contents and Index to find the topics most interesting to you. Please consider skimming all of the chapters, even those that don’t seem relevant to your needs, because each chapter often contains tips and tricks you might not find elsewhere.

I encourage you to begin by reading the primer in the next chapter, which lays out some terminology and the basic concepts that you’ll need to understand to get the most out of Fiddler and this book.

Fiddler is one of those must Must MUST have tools in your toolkit and most of use have used it on and off over the years. But how well have you used it? This book looks to help turn you into a Fiddling Ninja (well, maybe not a Ninja, but you get the idea...)