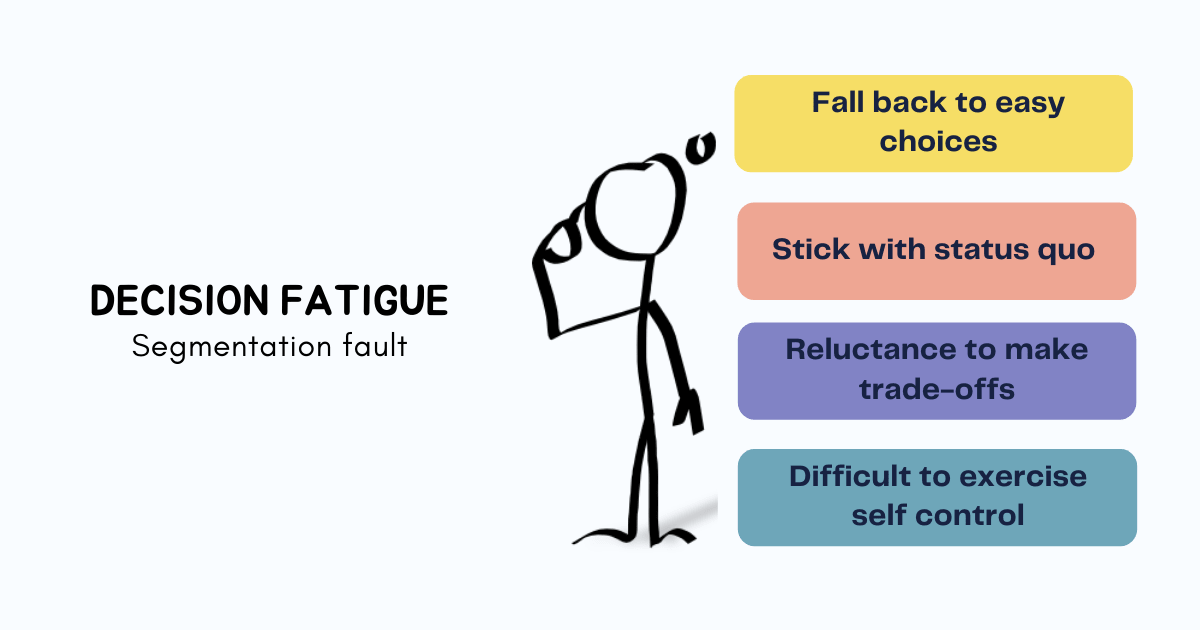 A series of these small decisions scattered throughout our day may seem harmless in the moment as they seem to demand only a small fraction of our mental energy, but as the day goes on and we continue to expend from this seemingly reserved pool of energy, our mental capacity to make decisions starts depleting.

Unlike physical fatigue which we can feel and instantly express, the mental fatigue that comes after making multiple decisions is not visible to us.

Decision fatigue as psychologists like to call it leads to poor quality of decision making - we show reluctance to make trade-offs, fall back to easy choices, and may even find it difficult to exercise self-control after making a series of decisions.

"If your work requires you to make hard decisions all day long, at some point you're going to be depleted and start looking for ways to conserve energy. You'll look for excuses to avoid or postpone decisions. You'll look for the easiest and safest option, which often is to stick with the status quo", says Roy Baumeister in Willpower.

Decision fatigue also explains why we are more reluctant to approve new ideas, find it difficult to choose from a number of presented options and end up making poor choices in the evening as opposed to making these decisions in the morning when our reserved bank of mental energy is at its best.

Before we get down to reduce and maybe even avoid decision fatigue, it's important to recognise its symptoms. Knowing when we are running on a low mental battery will enable us to avoid making bad decisions and find creative ways to save the battery for important decisions.

How to Identify When You Are Experiencing Decision Fatigue 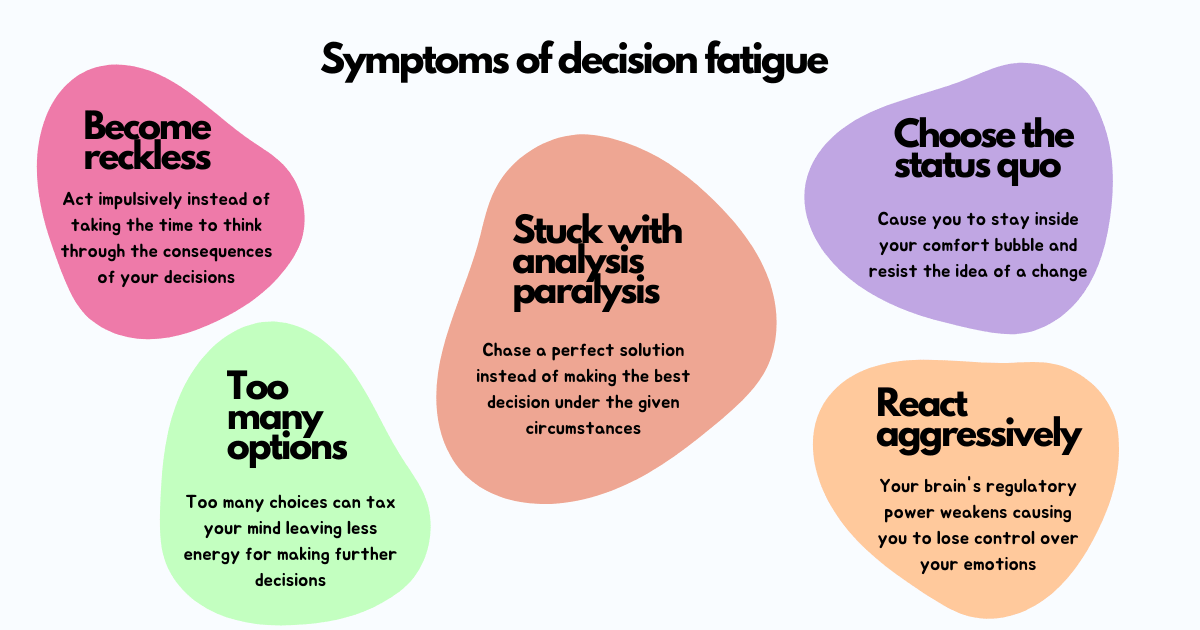 Decision fatigue will cause you to act impulsively instead of taking the time to think through the consequences of your decisions.

It shows up when you fall back to your instincts or choose an option just because its first order consequence is positive without analysing the second order effects of your decision.

Taking the time to think through the impact of your decision requires putting multiple options on your mental stage and comparing them. A tired mind isn't equipped to provide the resources for weighing in on different options, challenging your assumptions and navigating the potential obstacles required to make a thoughtful decision.

"Effort is required to maintain simultaneously in memory several ideas that require separate actions, or that need to be combined according to a rule. System 2 is the only one that can follow rules, compare objects on several attributes, and make deliberate choices between options. The automatic System 1 does not have these capabilities", says Daniel Kahneman in Thinking, Fast And Slow.

With your system2 deliberate thinking mode refusing to cooperate, your system1 automatic thinking springs to action and system1 is known to act on impulse or as Daniel Kahneman calls it "The law of least effort is operating here. He will think as least as possible"

It's easy to stick to what you know while exploring the unknown requires crossing the mental boundary from comfort to discomfort.

David Rock explains this in Your Brain At Work "Picturing something you have not yet seen is going to take a lot of energy and effort. This partly explains why people spend more time thinking about problems (things they have seen) than solutions (things they have never seen). It explains why setting goals feels so hard (it's hard to envision the future)"

After making multiple decisions throughout the day, decision fatigue can cause you to stay inside your comfort bubble and resist the idea of a change since it's uncomfortable and demands a lot of effort and energy.

Decisions made under the effect of decision fatigue with a mentally tired state can have a huge impact on your future. Sticking with the status quo can cause you to -

Making a good decision requires bringing knowledge from several domains, stitching distinct ideas together, maintaining the right balance of exploring breadth and depth across these ideas, making new connections, and then zeroing in on a few candidates that look promising.

When your mental machinery is tired, you will find it hard to process information to separate noise from the goodness of an idea. This may lead to overthinking, the tendency to think too much, and move back and forth on ideas without the ability to give them a specific direction.

Decision fatigue may cause you to obsess about the problems that don't even exist, draw biased conclusions, and be stuck with analysis paralysis with the possibility that there might be something better. It can cause you to chase a perfect solution instead of making the best decision under the given circumstances.

Decision fatigue is not necessarily caused by making too many decisions, it could also be a result of too many choices. We prefer having choices even when they don't necessarily add value to our decision.

At work, too many choices can cause designers to waste hours in finalising the right shade of blue. Marketers may find it difficult to choose the channel that will give them the maximum return for their investment. The hiring manager may be burdened with the task of finalising a recruiting agency amongst the many possibilities. And engineers may argue over minor details in the strategic planning phase to lock down on the specific tactics to be employed.

Choices can be overwhelming and too many choices can tax your mind by consuming resources in a short frame of time leaving less energy for making further decisions.

Under the effect of decision fatigue, your brain's regulatory power weakens causing you to lose control over your emotions. This makes everything around you feel more intense than normal.

Small mistakes can make you furious, disagreements may cause irritation and you may react aggressively to things that are not in line with your expectation.

Without your realisation, the switch in your brain may flip after many rounds of decision making causing you to react to people and things in your environment instead of taking the time to analyse and act appropriately.

How to Overcome Decision Fatigue

Decision fatigue is a real thing, but it's also something completely under your control.

Only you can design a personal system that maximises your chances of making the best decision as opposed to trying to squeeze out every bit of your attention.

We make a large number of decisions from the time we wake up - some consciously, others unconsciously, some trivial, others significant, some reversible, others irreversible.

Without controlling the number of decisions we make by choice and dedicating our peak mental energy to those significant decisions that impact our lives in a huge way, we may end up with poor judgment.

Inspired by Greg McKeown from Essentialism, we need to be essentialists when it comes to decision-making:

"The way of the Essentialist means living by design, not by default. Instead of making choices reactively, the Essentialist deliberately distinguishes the vital few from the trivial many, eliminates the nonessentials, and then removes obstacles so the essential things have clear, smooth passage. In other words, Essentialism is a disciplined, systematic approach for determining where our highest point of contribution lies, then making execution of those things almost effortless"

The first step to combat decision fatigue is to organise your life in a way that you prioritise what needs prioritising and put all your energy into getting it right.

So let's jump to this step in the process, which is to make your commitments visible by planning upfront.

2. Get Things Out of Your Head

Identify activities that align with your goals and values and say no to all inconsequential activities. Then spend dedicated time daily to plan what you wish to achieve each day. Planning upfront has two major advantages -

By not spending mental cycles in deciding every instant on what to do next, you can avoid decision fatigue and free up more resources to do the real work. It will also help you attend to those urgent situations which are not under your control with the right state of mind.

Putting this practice into action requires what David Rock suggests "Creating visuals for complex ideas is one way to maximize limited energy resources. Another way involves reducing the load on the prefrontal cortex whenever possible. The idea is to get the concepts out of your mind and into the world and to save the stage for the most important functions. Minimize energy usage to maximize performance."

A good way to get the plan out of your head is to utilise Eisenhower's productivity matrix to divide your work into 4 quadrants based on their urgency and importance.

The next step is to order these priorities for optimal resource usage - eat that frog first.

Tackle your most challenging task first, one that demands your mental capacity to process information at its best.

"The stage uses up power quickly, and as the lights dim, it gets harder to hold actors in the right place and stop others from getting on the stage. This tendency means scheduling the most attention-rich tasks when you have a fresh and alert mind. This could be early in the morning, or perhaps after a break or exercise. Making a tough decision might take thirty seconds when you are fresh and be impossible when you're not", says David Rock in Your Brain At Work.

By prioritising work that will have the greatest positive impact on your life and matching the mental demands of the work with your energy levels, you will be able to make the best decisions when you are not under the effect of decision fatigue.

What do you do when things don't pan out the way you wanted?

4. Believe You Have More Willpower

As much as we crave an organised world and like to be in control, things don't always go according to a plan.

You may be forced to make a decision when you are tired. What should you do then - say no to making a decision? Well, sometimes that may not be a possibility.

This does not mean that you will never feel decision fatigue if you keep making one decision after another. Rather, it guides you to believe in a growth mindset and exercise your willpower when put under tough situations, when you have to make a decision even though your mental resources have depleted.

By exercising your willpower in such moments, you may not make the best decision, but it will be much better than the one without it.

5. Know When It's Time to Stop

Roy Baumeister, a social psychologist, known for his work on willpower, self-control, and self-esteem says "The best decision-makers are the ones who know when not to trust themselves. Even the wisest people won't make good choices when they're not rested and their glucose is low. That's why the truly wise don't restructure the company at 4 p.m. They don't make major commitments during the cocktail hour. And if a decision must be made late in the day, they know not to do it on an empty stomach"

Know when it's time for you to stop - take feedback from your past decisions, identify patterns based on your best and worst decisions and incorporate it into your planning.

By knowing when you operate well and when you are physically present but mentally absent, you can make a choice to opt-out of the decision process and push those decisions to a later stage.

Be the master of your own life. Don't let it run on autopilot by learning to make a few decisions and make them well by being an essentialist, getting things out of your head, eating that frog, exercising your willpower, and opting out when you aren't adding value.