Sessions are an important part of any HTTP-based web framework. They allow web servers to keep track of the identities of repeat HTTP clients without requiring them to re-authenticate for each request. There are several different ways to keep track of sessions. Some do not require the server to persist session data (like JSON Web Tokens), while others do.

Django, a popular Python-based web framework, ships with a default session backend that does store persistent session data. There are several storage and caching options; you can elect to simply store sessions in the SQL database and look them up each time, store them in a cache like Redis or Memcached, or use both, with the caching engine set up in front of the database store. If you use one of the options that ultimately stores sessions in SQL, the django_session table will contain your user's sessions.

When perusing through your application's data, you may come across a problem that requires you to link a user's session data to their actual User entry (the auth_user table). This happened to me recently and when I took a look at the session table's schema definition, I was surprised that the user_id is not stored as a column. There are important design decisions as to why this is the case, but it is inconvenient to SQL'ers like myself. 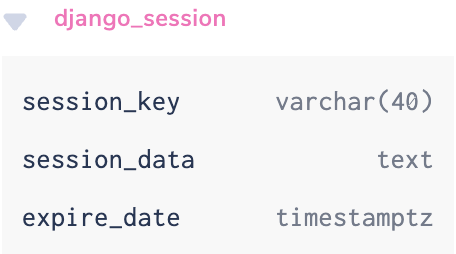 session_key is the key that clients are provided. Generally, clients making a request will include the session_key as part of a cookie. When the webserver receives the request, it finds session_key if it exists, then queries to see if the key is known. If it is, it will then look at the correlated session_data and retrieve metadata about the user and their session.

This is how you are able to access something like request.user in a Django request. The user_id is fetched from the decoded session_data, the built-in User object is populated based on the stored user_id, and then the User object is available for use throughout the project's views.

Some quick Googling showed me that by default session data is stored as JSON. I was already aware of Postgres' excellent JSON abilities (if you are not, check out this blog post), so I suspected this was something we could work with within the bounds of Postgres. This was great news for someone like myself who spends a lot of time in Postgres. 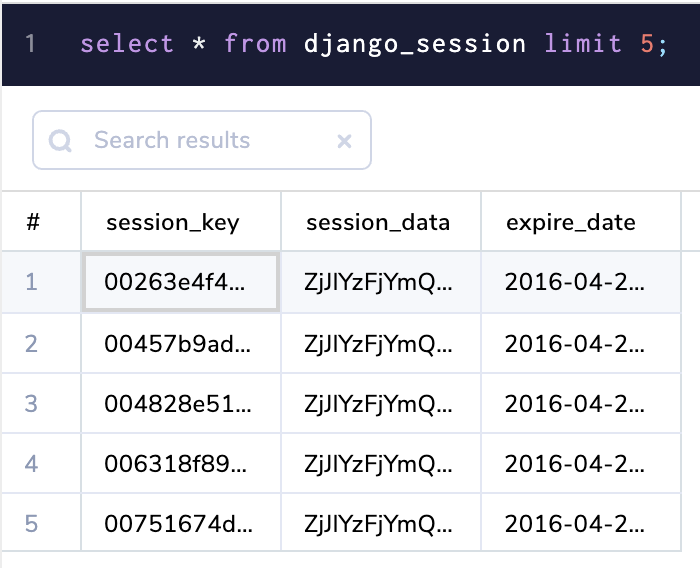 As you can see in the first image, session_data doesn't appear to be JSON. The metadata stored as JSON is hiding behind base64 encoding. Fortunately, we can easily base64 decode in Postgres.

This is hardly more readable. We need to convert binary data into text.

The "encode" function in Postgres allows you to "Encode binary data into a textual representation."

Now, we can finally see something human-readable. Here is one of the full decoded results in text format:

What we have here is a JSON blob prefaced by a colon and a hash of sorts. We're only interested in the JSON blob. A quick way to extract just the text past the hash and colon is to find the position of the first colon and extract all characters after it.

To further construct this query, we are going to break it out into 2 parts using CTEs. CTEs are helpful when you have built and selected a nontrivial column and you need to use it more than once. If we continued with only one SELECT, we'd have to type the encode(decode(session_data, 'base64'), 'escape') part multiple times. This is messy and if you decide to change how you wanted to parse the encoded data, you'd have to change the function calls in 2 places.

Here is our updated query which extracts the JSON part. 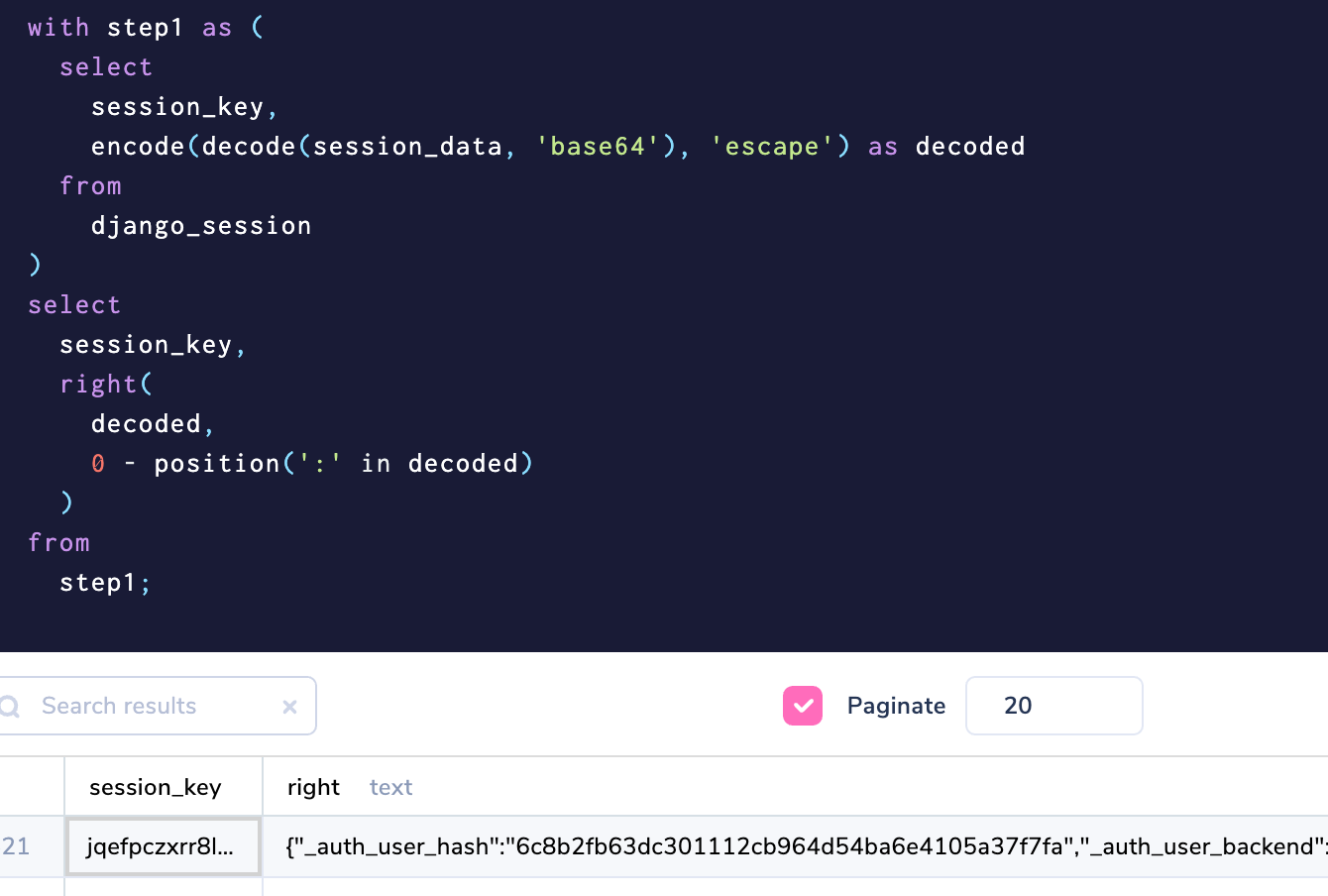 Now that the column is parsable as JSON we can continue. However, if you try to cast text to JSON in Postgres when the text is not valid JSON, Postgres will throw an error and stop your query. In my database, some of the sessions were not parseable JSON. Here's a way to quickly make sure the text looks like parseable JSON.

Any string that does not begin and end with curly braces will be filtered out.

This does not guarantee it will be able to parse, but for my database of several million sessions, it did the job. You could write a custom Postgres function to verify JSON parsability, but it would be slower.

With a WHERE clause to exclude invalid session metadata, it's time to cast our string to Postgres' JSON type and extract the _auth_user_id key from the JSON. Depending on your Django configuration, this key could be different. Once an object is cast to JSON type, you can query a JSON value by key using the object->'key' syntax. 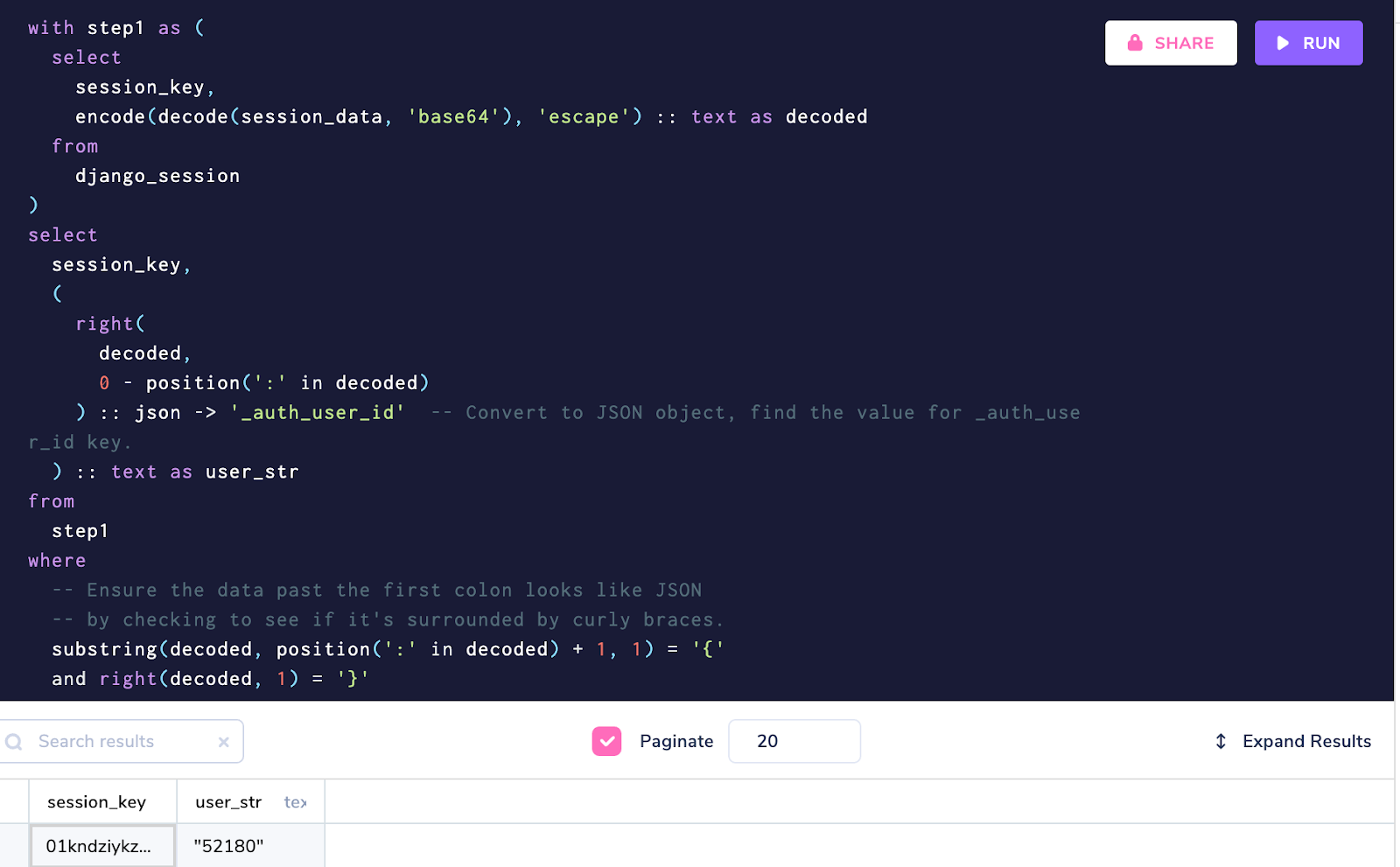 We're getting close! When casting from JSON to text, Postgres adds double quotes around it. Ultimately we want the user_id field to be an int, but Postgres will not parse a string that includes double quotes into an int. Even JavaScript won't allow that!

The TRIM function with the BOTH will strip the specified character from both ends of a string, leaving us with a clean string that can easily be cast into an integer.

Here is our final query after trimming the excess double quotes and casting to int. 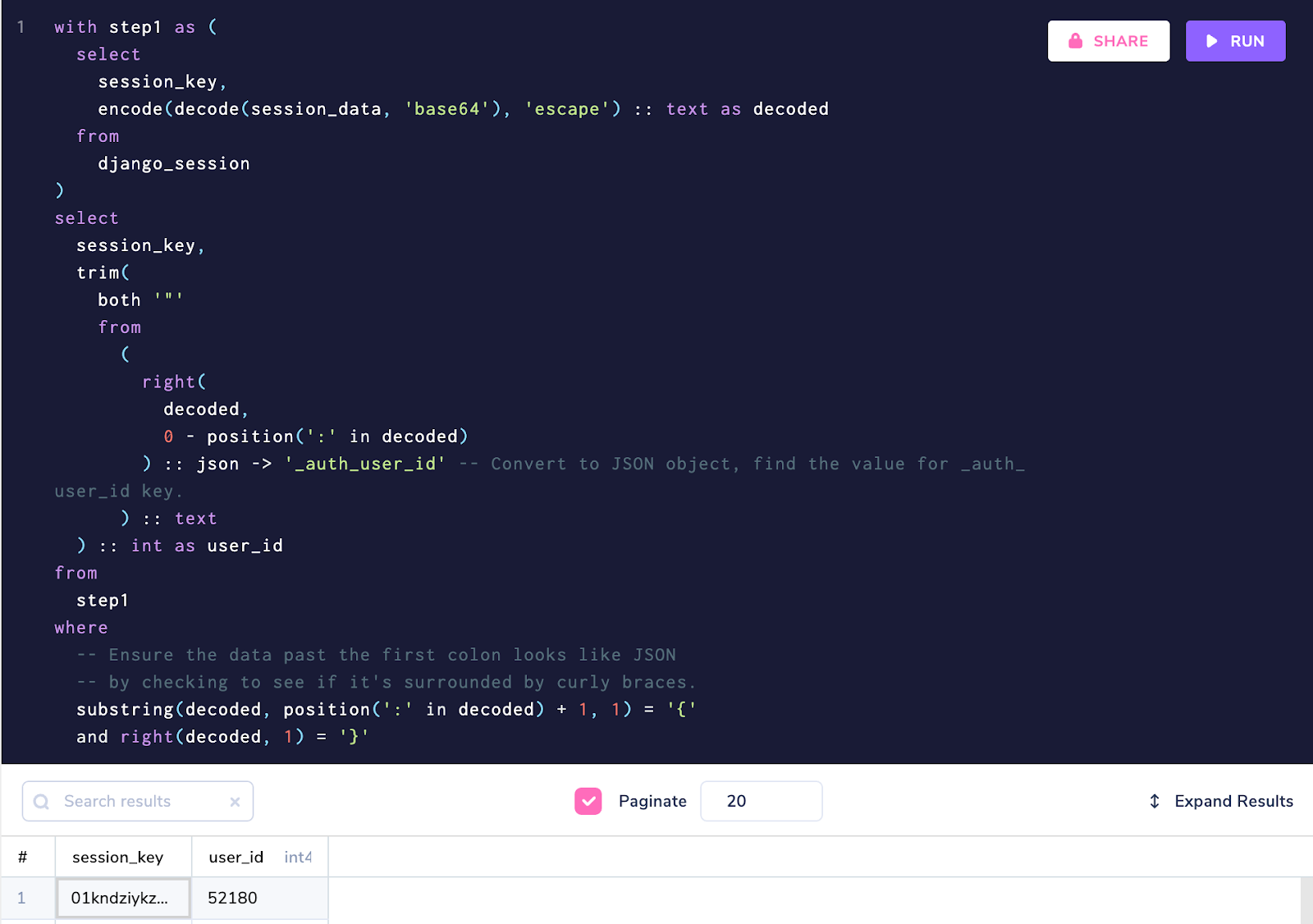 Now, as the sample result shows, we have linked session_key to Django auth_user id.

Here is the full query in the copyable form:

If your database has a lot of users you'll notice this query is very slow. Making a materialized view will allow you to repeatedly query the result from a persistent view without re-running the SQL.

When you create the materialized view (and anytime you refresh it), the source code for the view will be run and it will be populated with rows from the result. Be sure to refresh the view when you need up-to-date data!

Encoding and string manipulation in Postgres are a little more tedious than it would be in common languages used for web applications like Python, Ruby, or PHP, but it is very satisfying to build a view entirely in Postgres that quickly extracts the exact data you want and allows you to directly join to other tables.

The next time you need to extract data encoded by a web framework or another 3rd-party, check Postgres for the answer!

Published at DZone with permission of Daniel Lifflander. See the original article here.