Machine vision, or computer vision, is a popular research topic in artificial intelligence (AI) that has been around for many years. However, machine vision still remains as one of the biggest challenges in AI. In this article, we will explore the use of deep neural networks to address some of the fundamental challenges of computer vision. In particular, we will be looking at applications such as network compression, fine-grained image classification, captioning, texture synthesis, image search, and object tracking.

Texture synthesis is used to generate a larger image containing the same texture. Given a normal image and an image that contains a specific style, then style transform not only retains the original contents of the image but transforms that image into the specified style.

Given DxHxW deep convolution features, we convert them to Dx(HW) matrix X, so we can define the gram matrix corresponding to that layer's feature as
G=XX^T

Through the outer product, the Gram matrix captures the relationships between different features. 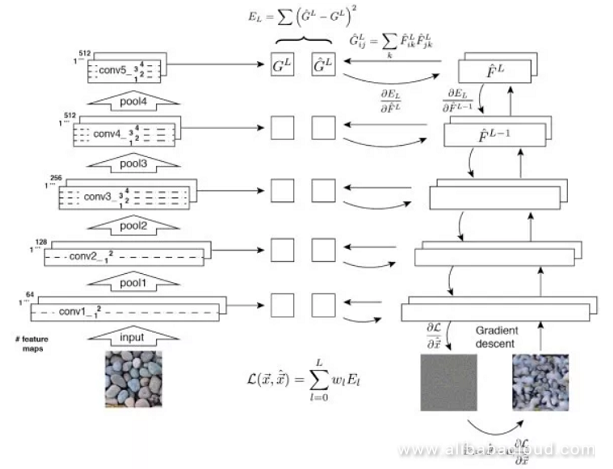 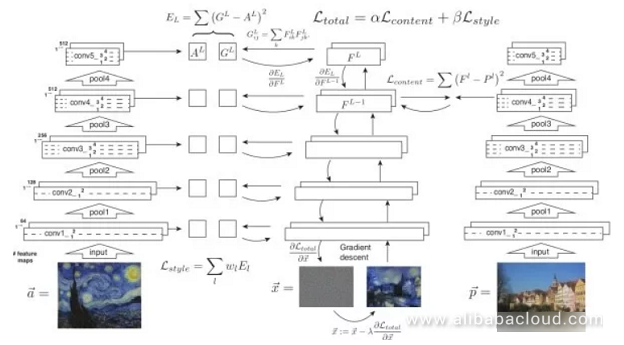 A failing of the method outlined above is that we can only reach convergence after multiple iterations. The solution offered by related work is to train a neural network to create a style transformed image directly. Once training ends, the style transform only requires a single iteration through a feed-forward network, which is very useful. During training, we take the generated image, the original image, and the style transformed image and feed them into a set network to extract features from different layers and calculate the loss algorithm.

Concepts Behind Both Types of Systems

As an issue of classification (facing a massive number of classifications), or as an issue of metric learning. If two images are of the same person, then we would hope that their deep features would be quite similar. Otherwise, their features should be dissimilar. Later, verification gets applied according to the distance between the deep features (setting a threshold of distance between features at which the point the images are determined to belong to different people), or recognition (k nearest neighbor classification).

This has been a hot research topic in recent years. Since the differences within a category could be quite large, and the similarity between categories could likewise be quite high, no small amount of research has got aimed at elevating the ability of classic crossover loss to determine deep features. For example, the optimization goal of L-Softmax is to increase the angle of intersection between the parameter vectors and deep features of different categories.

A-Softmax takes another step towards ending the length of the parameter vector at 1, focusing training on optimizing deep features and the angle of intersection. Practically, L-Softmax and A-Softmax are both challenging to converge, so during training, they used an annealing method to gradual anneal the standard softmax to the L-Softmax or A-Softmax.

This system determines whether the image of a face came from a real person or from a photograph, a key obstacle to face verification/recognition tasks. Some methods that are currently popular in the industry is reading the changes in a person's facial expression, texture information, blinking, or requiring the user to complete a series of movements.

Given an image that contains a specific instance (for example a specific target, scene, or building), image searching is used to find images in the database that contain elements similar to the given instance. However, because the angle, lighting, and obstacles in two images are most often not the same, the issue of creating a search algorithm capable of dealing with these differences within a category of images poses a major challenge to researchers.

First of all, we have to extract appropriate representative vectors from the image. Secondly, apply Euclidean distance or Cosine distance to these vectors to perform a nearest neighbor search and find the most similar images. Finally, we use specific processing techniques to make small adjustments to the search results. We can see that the limiting factor in the performance of an image search engine is the representation of the image.

Unsupervised image search uses a pre-trained ImageNet model, without outside supervision information, as the set feature extraction engine to extract representations of the image.

Supervised image search first takes the pre-trained ImageNet model and tunes it on another training dataset. Then it extracts image representations from this tuned model. To obtain a better result, the training dataset used to optimize the model is typically similar to the search dataset. Furthermore, we can use a candidate regional network to extract a foreground region from the image that might contain the target. 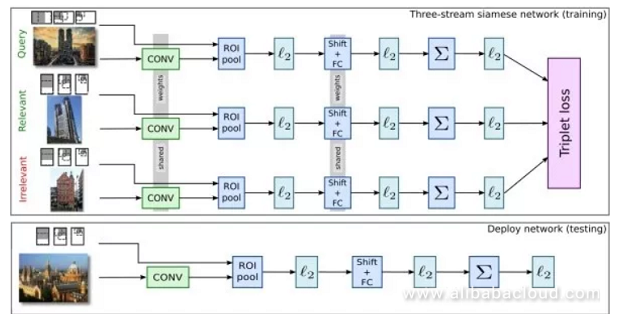 The objective of object tracking is to track the movements of a target in a video. Normally, the target is located in the first frame of the video and marked by a box. We need to predict where the box will get located in the next frame. Object tracking is similar to target testing. However, the difficulty to object tracking is we don't know ahead of time what target we will be tracking. Therefore, we have no way of collecting enough training data before the task and train a specialized test.

Similar to the concept behind face verification, utilizing a health network means inputting an image within a target box on one line, and on another line input a candidate image region, then output the degree of similarity between two images. We do not need to traverse all of the other candidate regions in different frames; rather we can use a convolution network and only have to feed-forward each image once. Through convolution, we can obtain a two-dimensional response map where the most significant response position determines the predicted location of the box. Methods based on a health network are quite fast and able to process images of any size.

Related filters train a linear template to distinguish between image regions and the regions around them, then use Fourier Transformation. Associated filters are incredibly useful. CFNet, in combination with a health network trained offline and a related online filter template, is capable of elevating tracking performance on a weighted network.

This type of model is used to learn the distribution of the data (image) or sample a new image from its distribution. Generative models can be used in super-resolution reconstruction, image coloring, image conversion, generating images from text, learning hidden representatives of an image, half-supervised learning, and more. Furthermore, generative models can be combined with reinforcement learning for use in simulation and inverse reinforcement learning. 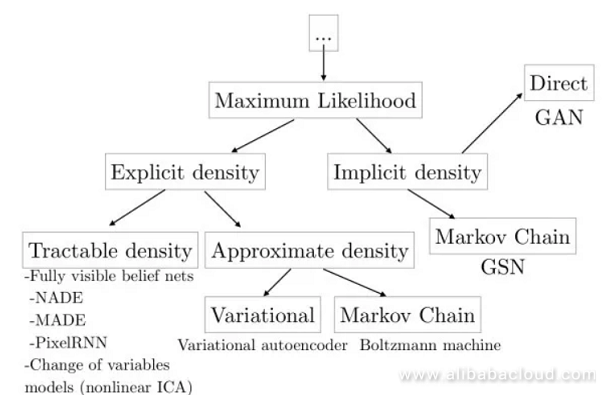 Use a formula representing the probability of conditions to make maximum likelihood estimations of an image's distribution and learn from it. This disadvantages of this method are that, since the pixels in each image are dependent on the previous pixels, the process of generating the image will be somewhat slow due to having to start in one corner and proceed in an ordered manner. For example, WaveNet can produce speech similar to that created by humans, however since it cannot get produced concurrently, one second of speech takes 2 minutes to compute, and real-time generation is impossible.

A variational auto-encoder use a decoding network to generate an image according to the hidden variable. As we are unable to directly apply maximum likelihood estimation, when training, similar to an EM algorithm, a variational self-encoder constructs the lower bound function of a likelihood function, then uses this lower bound function for optimization. The benefit to a variational self-encoder is that because of the independence of each dimension; we can control the hidden variables to control the factors influencing changes in the output image. 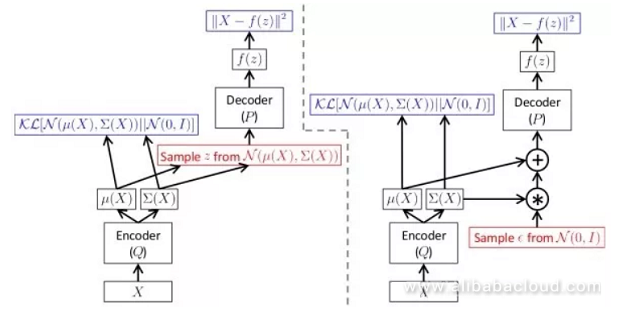 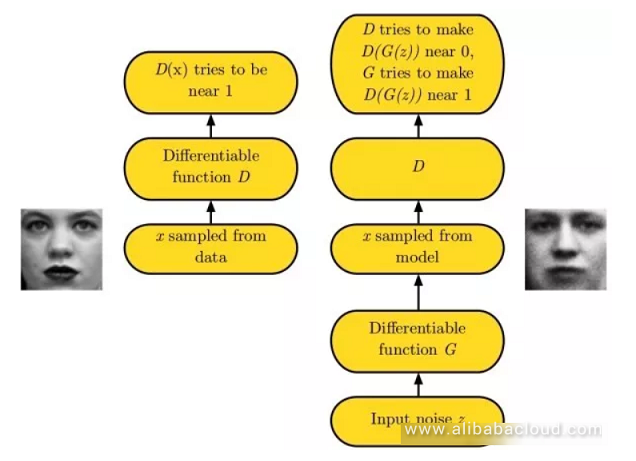 This type of method treats the video as a series of frame images. The network receives a set of multiple frame images (15 frames for example) belonging to the video, then extracts the deep features from those images, and finally integrates these image features to obtain the characteristics of that section of the video to classify it. Experiments show that results are best when using "slow fusion." Furthermore, independently organizing single frames can also produce very competitive results, meaning that the image from a single frame contains a significant amount of relevant information. 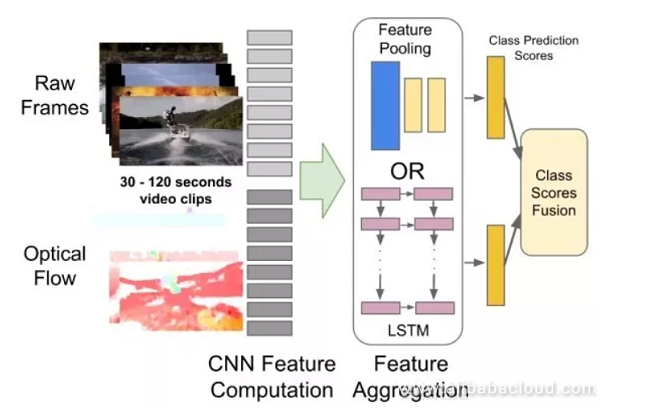 Moreover, researchers have attempted to combine CNN and RNN so that each convolution layer is capable of capturing distant dependencies. 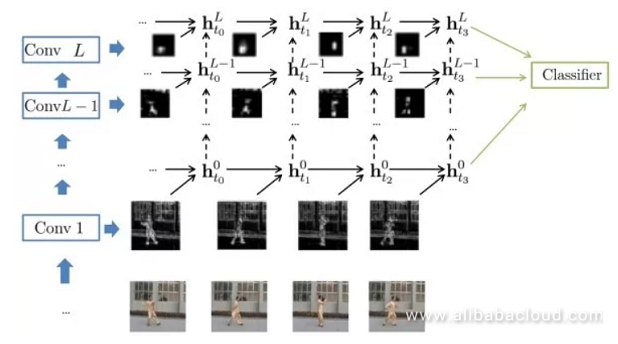