Controller is one of the critical components in LoadRunner workflow which helps to create scenarios. The scenario is a collection of one or more scripts. A scenario defines the test duration, how the virtual user should simulate, how actions should be performed, and which machines should generate load/inject.

You define following fields while creating the scenario in the HPE LoadRunner controller. 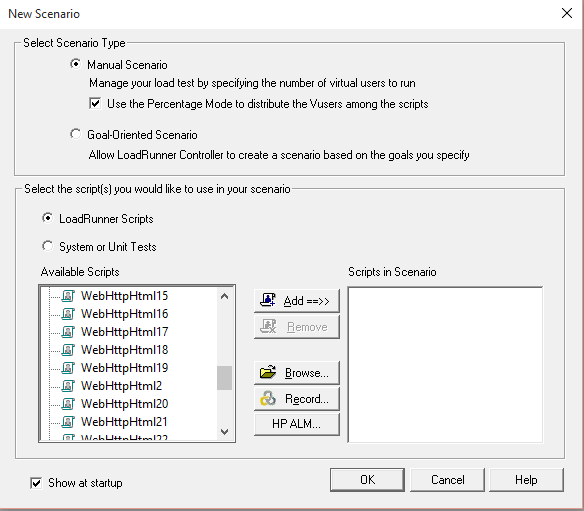 When you invoke Controller, you will get above screenshot where you need to select the scenario type and the scripts to be load tested. There are two types of scenario: Goal-oriented and Manual scenario.

Goal-oriented scenario helps to define our goals to achieve where LoadRunner automatically builds a scenario. E.g. if you want to inject 50 hits per second, just mention the goal as shown in the below screenshot.

Following goal-oriented scenario is possible to create in Controller:

Controller can run Vuser scripts as well as system/unit tests such as Selenium tests, NUnit, and JUnit tests.

Service Level Agreement can also be created for both the types of scenarios in HPE LoadRunner Controller. In next article, you are going to learn about how to design a goal-oriented scenario. Please do share my article if you like it