In their raw state, logs are barely readable to the naked eye. There is a small tool that can collect the traces and visualize them in an HTML flame chart. To install the tool, run the following command:

Next, run your app again and pipe the output through the timeline-view tool:

Run the app, perform the actions you want to test, and then click Ctrl + C in the terminal to break the CLI execution. The timeline-view tool will collect the traces before exit and generate the report. It will print the location of the report in the terminal so you can open it easily in a browser.

Let’s look at how we can use this tooling to help improve the performance of a real app.

Practice Buddy is a NativeScript + Angular app that helps music teachers work with their students. Music students use the app to record practice sessions that their teachers can listen to and provide feedback. Kudos to Jen Looper.

The app makes a great example of the timeline and performance improvements for 3.1. Here is the breakdown:

Here are the numbers you get by updating PracticeBuddy’s app/package.json file to enable tracing and running the app with:

All of this adds up to a total of about 9 seconds.

The vanilla tns run doesn't incorporate the webpack and the Angular tooling. To see the difference adding these optimization steps makes, let’s run the app again with webpack using:

All of this adds up to a total of about 3 seconds.

Here are the numbers from that run:

This time we have a total of about 2.5 seconds.

The “extracting assets” portion of the profiling is the time it takes to read JavaScript, XML, and CSS files. But why do we need assets extraction when the webpack can pack them all as JavaScript strings and they can actually get in the snapshot? These assets are extracted only once on the very first app launch. Subsequent launches won't include that time. So this is something we may consider handling better in distant future but at the moment is a task with low priority.

This is the bad guy we have on our roadmap to deal with in the near future. Basically, when you create a function and enclose some objects in JavaScript, and pass this as implementation for a Java interface, the NativeScript framework has to keep the Java objects alive while the function is alive in JavaScript. This happens upon garbage collection, NativeScript will walk up the JavaScript function’s object graph and reference potential Java objects so they survive the Java garbage collection. This hasn’t been an issue in vanilla NativeScript applications nor the Android Runtime unit tests as the object graphs there are relatively small. Now with the snapshot, we try to put all the JavaScript up front in the vendor.js and feed the heap as early as possible, making larger heap and affecting negatively the MarkReachableObjects.

What Was the V8 Snapshot Again?

There is an extensive blog of what snapshots are and how to enable them by Ivan Buhov.

What the snapshot does is to run a command line tool on your Mac. (The snapshot generation feature is limited to macOS and Linux currently, see the link above for details.) The tool executes all the JavaScript from your vendor.js in a V8 instance and then captures the in-memory objects into a big (increases app size) blob. When the app starts, instead of parsing and executing your JavaScript, the app just loads the blog into memory and continues.

Every time the app starts on a device it feels like a gamer is resuming a saved game—the app doesn't have to replay the loading, parsing, and execution of the JS.

How to Maximize the Benefits

There are two quick things you can do to maximize the start-up performance of your app.

Running the timeline-view shows slow require paths. You will be surprised the amount of unused JavaScript your average NativeScript app might be in. Here are a few examples we’ve found.

To further optimize the startup time for the Android version of Practice Buddy we added the following lines to that app’s vendor.ts file:

This saves another 200 ms during startup, as those files are now included in the webpack bundling, and therefore also the heap snapshot.

Finding chunks that should be moved from the bundle.js to vendor.js is easily done using the webpack-bundle-analyzer and has been covered in the 'Using Webpack to Bundle Your Code' NativeScript article.

In general you should move everything from node_modules to the vendor. This is done by requiring the modules in the vendor.js. However some plugins that use native Android APIs will have to be refactored as the native APIs are not exposed during the snapshot generation. You can check the PR for the nativescript-plugin-firebase made by Stanimira Vlaeva, as it provides a good example of wrapping access to Android Java classes in functions and delaying their execution until runtime. When it is merged, a require("nativescript-plugin-firebase") should be added to the vendor.ts file of any apps that use that plugin.

Now this is the webpacked and uglified Android version of the app in 3.0.0, with explanations of the main times and what is expected to happen by adding the 3.1.0 snapshot feature: 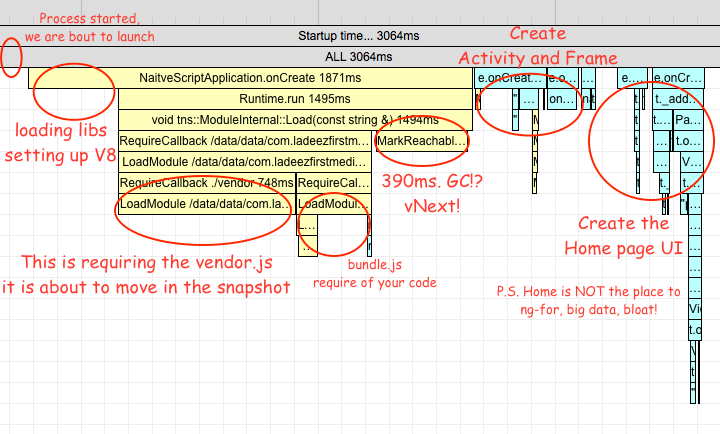 Now that we’ve thoroughly broken down the Android loading process, let’s shift our attention over to iOS.

Here are the stats on running a vanilla NativeScript iOS build and piping the data to the timeline-view tool.

This improves the app loading speed by about 3 seconds.

Why only 3 seconds? The first 900 ms in the stats above are debug-only steps. The waiting for debug time is removed in release and also live-sync is not available in the release. So release builds will take almost 3 seconds.

Next let’s add a webpack as well as uglify minification so we get the best possible performance out of this Angular app.

That is a little under a sec if you subtract the debug-only “waiting for debugger” step.

Bundling packs all files in a single file, reducing file I/O, and uglification has a much higher impact since JavaScriptCore on iOS doesn’t perform JIT compilation. The bundle extraction happens again but it is fast, in the previous case it was slow because of the number of files.

With fast times comes great responsibility. Now that your app starts under a second on iOS and under two seconds on Android, how do we make the best impression for the transition from the user tapping on your app’s icon until they see your app's full content? You can't put your app's slogan nor a fancy animation since there is simply not enough time for the user to consume it.

For iOS, the best example would be the launch of the calculator app. It brilliantly follows Apple's Human Interface Guidelines for Launch Screens.

For Android the launch animations are not as smooth as the one for iOS, besides the startup time is twice as long. But you still benefit if you follow these rules.

A flash of unstyled content is where your app briefly appears unstyled or incomplete, before the final “paint” of your app. This sort of behavior is more common on the web, where you have to wait for assets from a network, but you might experience this in NativeScript app if your startup processes involve some asynchronous tasks.

Almost perfect! Adding the profile times on application:didFinishLaunchingWithOptions: and viewWillAppear: will show that the Angular framework will instantiate the native views outside these methods, probably the process chains on a promise. The initial Page will be displayed without content and the actual content will appear a little bit later, probably skipping the fade animation between the launch screen and the in-app view. Just provide adequate styles for the Page and ActionBar views in the app.css instead of somewhere in the main component's css, so that the delay doesn't flash as an unstyled Page.

Keyboards take time to draw and open with animation. Keyboards also hide part of the login form content on the home page. First-time users probably have no accounts. They will need to register and having the keyboard hide the "register" button is bad, even though the "username" field is focused initially. So as a general rule of thumb - avoid automatically displaying software keyboards on the first screens of your app. To disable the keyboard in Android you can configure the app/App_Resources/Android/AndroidManifest.xml by adding:

Remove the "profiling": "timeline" from app/package.json before release. When building in release both the iOS and Android platforms will skip some debug stuff and hurry up a little.

Subsequent hot runs get under 2 seconds for Android:

What if I told you it gets even better with the built-in iOS icon to launch screen grow transition and the launch screen to app fade transition? Especially when the native framework uses ref counting instead of GC.

I am not sure how to precisely measure the time in the release build, but here is how it looks:

The tool makes use of some NativeScript internal knowledge and may be too verbose in some cases, but leave gaps at others. We will try to polish the position of these manually placed traces. If this turns useful enough we may try to merge the data with the timeline profiling utilities in the Web Inspector and the Chrome DevTools.