have you ever done the design of a layered application – usually representing a certain functional domain or microservice – consisting of the usual web-, façade-, businesslogic- and data-access-layers? did that annoy you because of the continuously rising quantity of pure delegation methods in the façade- and businesslogic-layer that produce nothing but “hot air” (and of course work overhead)? then the cdi-based “enhanced eventdriven service-design” (“eesd”) is for you!

note: although this article explains some basics about cdi-events, it is not a tutorial for newbies. it is presumed, that you already have basic knowledge about cdi and its event mechanism.

the main achievement of eesd – provided by the “magic4j-cdi-utils” library – is, that it enhances the cdi-event mechanism by injecting the result of an event-observer method back into the event-producer – while still keeping both the event-producer and the observer completely decoupled. this seemingly small feature nevertheless opens up the door to a significantly more lightweight application design: in a traditional layered application design that conforms to the dependency inversion principle (dip), you needed interface methods in api-modules of each layer as the abstraction from higher-level- to lower-level-modules (see diagram 1 below). 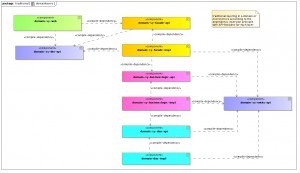 traditional application layers with consideration of the “dependency inversion principle”

in eesd, cdi-events replace these api-methods as the abstraction. an interceptor provided by the magic4j-cdi-utils delivers the ability to inject return values into the event-producer. crud-methods which do not need additional business logic are ideal eesd-usecases: just imagine that you can now trigger a dao-method from the web-layer without the need to go through the facade- and businesslogic-layers. instead of bloating the intermediate interfaces and implementation classes with useless methods, you only involve those modules that really contribute to the solution.

in order to round up this quick intro, here are example code snippets that show you the implementation of eesd with magic4j. if you are familiar with cdi and its event-mechanism, you will probably already be able to look through its easy usage. the central part of magic4j-cdi-utils is the “eventresultproviderinterceptor” that manages the provision of the result value to the event-producer. be aware, that there is no need to fire back a second cdi-event to the original event-producer!

please also note, that the event-producer must be an @requestscoped cdi-bean. i’ll explain this in a minute.

below you find the code snippet for the observer-bean.

listing 2: the bean with the observer-method for the @retrieveorder event.

the call sequence of the retrieveorderbyid(orderid) example

as already mentioned above, there are 3 beans and 2 events involved in this example:

the following activity-diagram should clear up the call sequence:

in eesd, the layers lose their aspect of being at a fix, certain level in the hierarchy of layers, where each layer has to be called by its superior layer in every request.

due to the synchronous nature of the cdi-event delivery (default behavior), the execution sequence is exactly predefined. in fact, the method that fires an event receives back the flow control only after the event has been completely processed by the observer-method (and the result has been injected into it by magic4j). furthermore, it is also possible to nest events in that sense, that you can fire another event from within an observer-method. see the above activity-diagram for a concrete call sequence with 3 components and 2 events:

by applying the eventresultproviderinterceptor and some more annotations from the “magic4j-cdi-utils” library, the result from the observer-logic gets automatically injected into the event-producer-bean. this leads to a situation where you can effectively mimic a normal call to a non-void method without any coupling between the caller and the callee. in other words, you call a method indirectly and the assignment of the result variable happens under the covers of magic4j.

each event-producer bean that is meant to receive a return a value from an observer, must be an @requestscoped cdi-bean. the main reason for this is, that magic4j can provide the return value only to an instance variable of the event-producer. if the scope was for example @applicationscoped, then mutable instance variables lead to thread-unsafety. as of magic4j version 1.0, each bean with an observer-method that is meant to return a value to the event-producer, must also be @requestscoped .

5. effects of skipping the facade

the façade-component is no longer needed for eesd-usecases. thus the two main responsibilities of the traditional façade get split up into other components:

in order to keep the module dependencies to the dto-api- and the entity-api-module clean, the dto-to-entity-mapper-component must provide map-methods that return the target-instance as a serialized xml- or json-string. the reason for this is, that by dissolving the façade-component we lost exactly that one component that was the only one to have dependencies to both modules. nevertheless, we still want the web-component to only depend on the dtos while the business-services and the daos should still only depend on the entities.

the mapping from the entity to the dto must now be initiated by the dao- or businessservice-component. in order to avoid a dependency to the dto-module there, the mapper cannot return the dto itself, but instead a serialized xml- or json-string representation of it.

the same is valid vice versa for the web-component when it needs to transform the dto to an entity. but this is no problem for the dtos because they need to be xml/json-serializable anyway so that jax-rs can send them over the wire. the only overhead is, that you need to make the entities xml/json-serializable as well.

5.2 shifting the transaction boundary into the weblayer

in the absence of the façade-layer, the transaction boundary gets shifted into the web-layer. therefore, there are at least the following two alternatives:

although there are frameworks like apache delta spike, that make it possible to unittest cdi-injections in a standard-unittest-vm, testing eesd-interactions outside of a jee container currently seems to be impossible, because @requestscoped beans do not seem to be supported in standard-vms (see the list of supported features of weld 2.3.3 final )

note: although the author is not a fan of the arquilian framework, this currently seems to be the only way to write tests for eesd. please leave a comment if you know about alternative test possibilities. anyway i have of course done integration testing including load testing in order to ensure, that return values don’t get mixed up because of multi-threading issues.

the question arises, if you should completely set aside the api-modules, especially also for those cases, where each layer does contribute to the solution. to be honest, i think that in such cases, you should still prefer the usual programming model, because it’s easier to read.

for crud-operations where no additional code in the business logic component is needed, you receive the full benefits of eesd.

even if you need some business logic, you can still skip the facade. the event fired from the web-component gets observed in the business logic component and from there, the dao-method should be called via a normal api-interface method.

to generalize this: if you need to communicate between 2 components that were direct neighbours in the traditional application layer concept, then you should stick to the traditional direct method calls, because it keeps your code more readable. as soon as you can skip one layer, you should use eesd. i want to discourage you from introducing additional dependencies compared to the traditional layering, e.g. the weblayer should not get a compile dependency to the business logic api or the dao-api.

thus the best approach for readability on the one hand and code compactness on the other hand should be to use both design strategies in parallel and use the best of both worlds where appropriate.

i have released the magic4j-cdi-utils under the apache license 2.0 to the central maven repository. thus you simply need to add the following maven dependency: