this post was originally posted on ' from the frog's mouth '. you're welcome to comment here or there .

the problem of dependency management is neither new nor original, it exists in all development platforms, and .net is no different. let’s go through different solutions and see how they perform. i’ll list them here in no particular order.

keeping dependencies in your source control

that’s a very popular solution, and for a reason. the benefits are obvious. here are some of them:


sounds good, doesn’t it? so, what’s wrong with it? only one thing - source control systems are designed to control, well, sources. as such they aren’t so great in controlling binaries. these are the shortcomings we all encountered during the years of version control system usage for dependencies:

as you see, the conclusion is simple - we can do better. let’s try something specialized for binaries.

global assembly cache is, on contradictory to vcs ,tailored for storing binaries. it understands versions, prevents conflicts, and generally does a good job being your local dependencies storage. the main problem with gac is being local, which means - each and every developer should take the binaries from somewhere and install them in their local gac. you see the troubles coming in that setup, don’t you? webgac to the rescue here. it's essentially gac shared by webdav and enables clients to fetch dependencies from the server, simplifying dependencies management for a team. let’s do our pros/cons math. the benefits:


let’s see what won’t work so great with that solution:

looks like we still didn’t find what we are looking for, and then...

this is something else. nuget designed to be “a developer focused package management system for the .net platform intent on simplifying the process of incorporating third-party libraries into a .net application during development”. that’s exactly what we need. let’s look how great it is:


this tool's like a dream come true. so, what can i mention as downsides? most of them are downsides of the nuget gallery, not nuget itself. the gallery is a young and relatively small project (just for the sake of comparison, maven central is 6 years old and contains more than 290k artifacts) and, as such, it has its downsides:

remote feeds , introduced in nuget 1.4 are crucial need for any development team. it serves a dual purpose: it allows sharing 3rd party packages that aren’t available on gallery (or even replaces the gallery for those who can’t trust it) and it serves as a target for internal deployments - both for team collaboration and for other usages, as making packages available to qa, or even serving them to the customers from the outside world (by using chocolatey , for example). if that’s so right, what’s wrong? here’s what:

so, is there a good alternative to nuget remote feed to be your in-house gallery for nuget packages? we, the proud makers of artifactory , believe there is.

artifactory is an enterprise-grade binary repository that centralizes all aspects of managing software binaries. that means that we tackle all the problems mentioned above. we are developing artifactory since 2006. being used by millions of users for storing, sharing and managing binaries, we have gathered great feedback from our users. that's what we've learned:

you get the gist behind artifactory by watching this 2.5 minutes youtube video

. if you’re not in the mood for movies (or ran out of popcorn), here’s quick recap:

as you see, instead of working with a number of nuget feeds (nuget gallery, orchard gallery, remote feeds from co-workers and from different teams) developers work with exactly one repository. it simplifies setup and daily work and centralizes management and maintenance. the work is bi-directional, the users resolve their 3rd party dependencies from artifactory and deploy their created packaged into it. now let’s add a build server to the picture (literally):

yup, with numbers this time. so, here we go:

built packages in artifactory can be used by other teams (as their 3rd party dependencies), by qa for running tests and even by the end users ( chocolatey ftw), all this with fine-grained permissions and robust promotion procedures (moving a package between repositories with different visibility rules). you know what? it deserves dedicated how-to blog post. i’ll link it here once published.

assuming you've read up to this point, you've gathered that starting from artifactory version 2.5.0 we are proud to serve the .net world with full nuget support. we can proxy any remote nuget feed (starting with nuget gallery, of course), we can host the packages that aren’t found on any remote nuget feed, we can host the packages you produce and we can aggregate any number of repositories of any kind under single a url. we provide you with an awesome ui for configuring your repositories, browsing and searching for your packages. we also feature smart storage that enables attaching searchable metadata on top of your binaries. we can do it all on the cloud with our saas version .

hopefully , you're convinced by now and probably looking for the download link on our site ( here’s it , btw, click on “evalution”). if not, give it a try by playing with our live demo . look at the nuget-gallery cache: that’s how we proxy the nuget gallery. you’ll find some of the packages saved locally; once you've selected a package, you’ll see all kinds of information about it: its name and size, who deployed it to artifactory, where it came from (from nuget gallery, naturally for this is the nuget gallery cache) and the operations you can perform on this package (as anonymous the selection is naturally limited). clicking on the triangle in the tree will open the package and let you dive into its content, including downloading specific files from the archive: 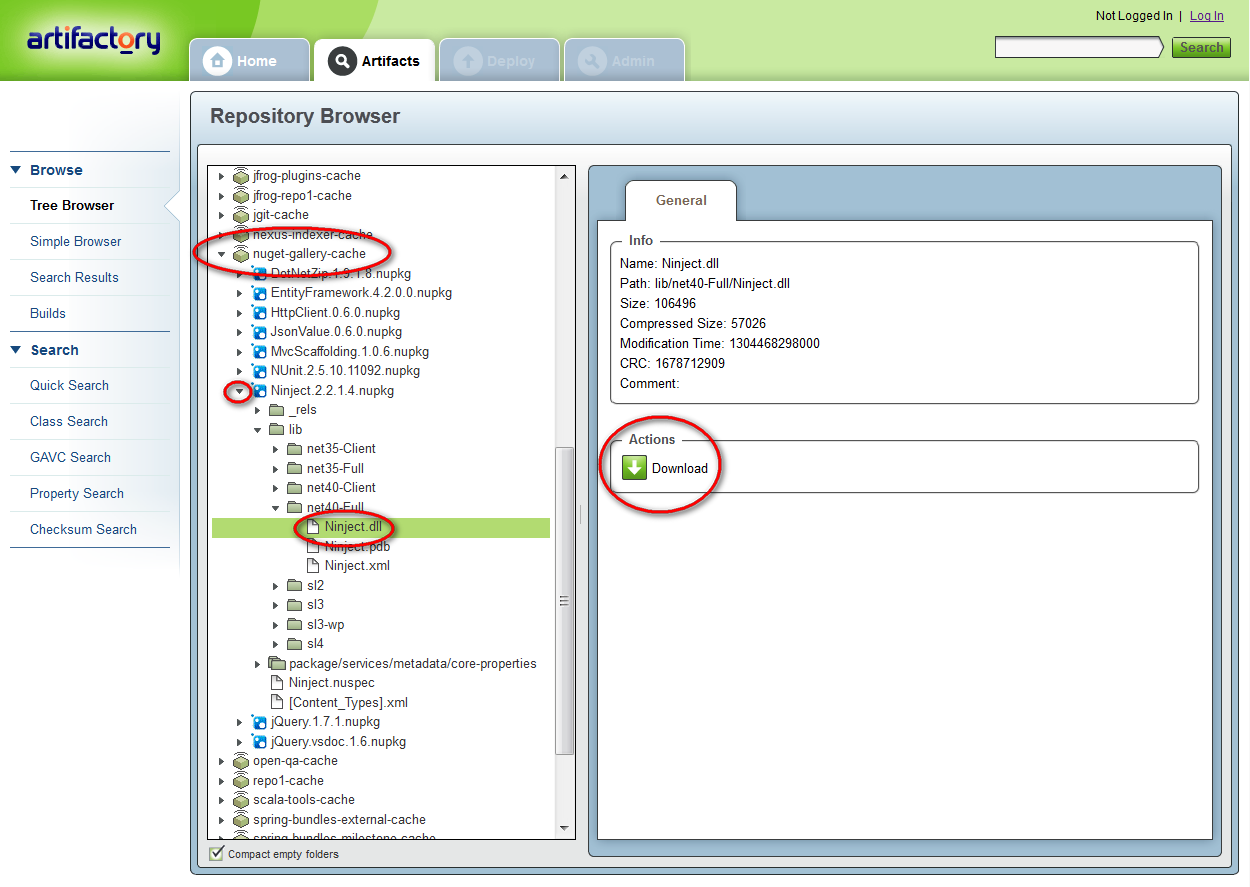 we, at jfrog, believe that artifactory is the missing piece of the puzzle for a robust, agile .net dependency management, which can make the development process easier compared to other alternatives. we'll be happy to receive any insights, thoughts and comments on the ideas presented in this blog and/or your experience using artifactory together with nuget.