It's been quite some time since I blogged. I was busy writing the book on GraalVM. It was an awesome experience writing my first book. Never thought it will be so intense though :-D but enjoyed every bit of it

Before I get into the actual topic, let me introduce GraalVM. Here are some blogs on GraalVM, I had published before.

I also blogged about what is inside the book here. Supercharge Your Applications with GraalVM — Book

While writing the book, I built a simple Online Book Library Microservices application as a reference implementation to demonstrate the concepts of GraalVM, and how we can build native applications using Quarkus and Micronaut and run them on GraalVM.

To Deploy this microservices application, I had built a GitOps pipeline (Which is not covered in the Book). I thought it will be a good idea to blog about my learnings building a GitOps pipeline using GitActions to deploy a Quarkus native application/GraalVM on IBM Cloud.

I am assuming you have already created an account with IBM cloud (and this can be any cloud for that matter, some of the commands will change based on the target cloud. I am deploying my application on IBM Cloud)

An API key is required for the GIT Actions GitOps workflow to connect to the cloud account, and deploy the application. API Keys can be created in IAM. Here is a screenshot of the API key that I have created. I called the key name as bozo-book-lib-cluster-api-key ( I took the note of the key and the secret — as I will need this to configure in the GitActions) 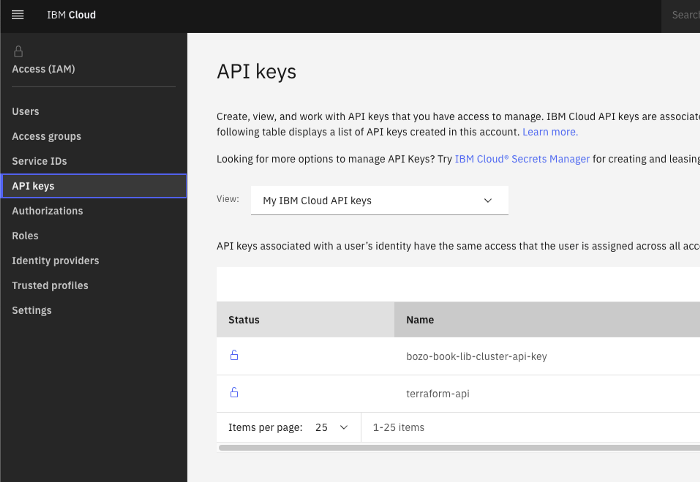 Create a Kubernetes cluster in your respective cloud account. In my case, I created an IKS (IBM Kubernetes Service) cluster and named it kvijay-kube-new-cluster

Assuming that the source code is already checked into a Git repository. Go to the respective repository, and go to the “Actions” Tab and click on “new workflow”. Here is the screenshot

you will be shown a catalog of various templates, that you can choose from. Pick the appropriate target cloud template. In my case, I picked IBM Cloud

For the GitActions to use the cloud account, API keys. It's safer to create these secrets as “Secrets” in GIT and use them as named variables in the GitActions workflow. To do this, go to “Settings” and select “Secrets”. The following screenshot shows the variables I created in my GIT.

Now is the critical step of writing the actual pipeline code. Here is a screenshot of the code, I will walk through the code, and explain, what I am doing here. you can also refer to my git repo for actual reference implementation and pipeline code

In the above block of code, I am setting up the environment and configuring the trigger

Line #9: Name of the GitActions Workflow

Line #11–16: The logic for Triggering the workflow. It basically reads “On push on the “main” branch under “bozo-book-info-service” folder — Trigger this workflow

Having configured all the variables. Let's go through the actual pipeline logic

Line #35–42: We are providing the information to the GitActions on which is the base platform that we will use to run the build process. In this case “ubuntu-latest” and some meta-information, like the name of the actual job.

Line #45–51: We are downloading the latest IBM cloud CLI and installing it on the base platform. We will need the CLI and the plugins (Kubernetes service and container registry) to push the builds to the IBM Cloud.

Line #60–63: Generating a unique build number. To generate the build number, we are using a Gitactions plugin called build-number by developer einaregilsson. (Likewise, there are a lot of extensions/plugins that u can use to accelerate the workflow coding)

Now that we have logged into the IBM cloud, we are ready to run the actual build and deploy

Line#70–73: We are building a quarkus native container image of the application using maven. The screenshot does not show the full command. here is the full Quarkus command

Line #85–91: Connect to the IKS (IBM Kubernetes Service — equivalent to EKS in AWS), set the context to the right namespace, and deploy the container.

This workflow gets triggered whenever we push the code changes. We can see the workflow status under the “Actions” tab. as shown in the screenshot below

Hope this was useful. I have a lot more coming up…