SQL Clone is a very handy device for database developers. The main thing stopping me from initially using it more widely was culture shock. It is a new and strange experience to be able to have several local copies of the database I'm developing without worrying about disk space and without having to fuss about keeping them up to date. This means that I can create a series of cloned databases and then migrate each one to a different version without requiring enormous amounts of storage.

Even more of a shock is being able to make radical changes to the data or schema while testing in the knowledge that it takes only a few seconds to revert the database back to its original state, ready for the next test run. I'll show how to use SQL Clone, the database provisioning component of SQL Provision, to achieve all this. With a bit of additional scripting, you can even revert a copy of the database without worrying too much about losing any schema changes by using SQL Compare to compare the altered database with an unadulterated clone and save any changes as scripts in files.

With these various tricks, SQL Clone changes the whole chore of testing into something that is almost akin to pleasure. In fact, more testing becomes possible within the tight schedules we now experience.

Like most developers, I hate doing a chore more than once, so I script as many developer tasks as possible. Although SQL Clone has a console that is accessible via a browser, I prefer to run via a script. In this article, I'll provide two scripts, which will cover the chores of:

These two scripts are designed to get you started. You can turn them into parameterized functions or use them as templates.

As you can imagine, there are plenty more tasks you might want to script. After you've made and tested your changes, you might want to revert all the clones or simply delete all clones as well as the current image. You might want to apply a migration script to each clone in order to test out all variants of a particular version of a database (e.g. different language, nationality, legislative area or culture). I'll cover some of these in subsequent articles.

I'm assuming you're already familiar with the basics of SQL Clone and how to create images and clones. If not, check out the Redgate Product Learning articles. Here's the setup I used for this article: 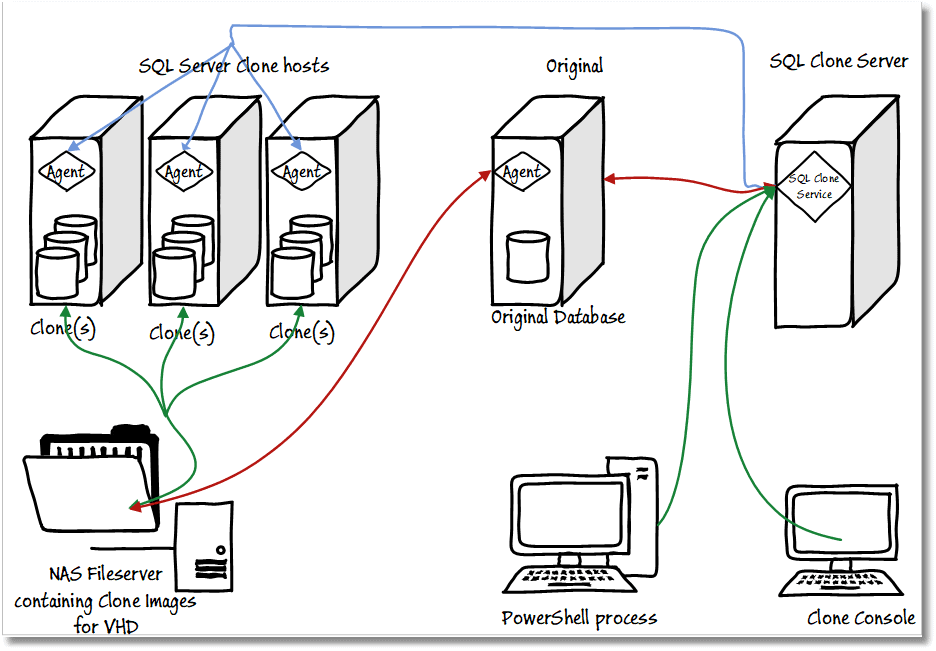 Before you attempt any scripting with SQL Clone, make sure that everything is properly set up and running from the console.

The sort of work that benefits from scripting are those processes that are rather repetitive with very little variation. To manage them, I've put all the static details into files that can be shared by several scripts. Listing 1 shows the main config file, called CloneConfig.ps1, which gives all the necessary details of the topology of the development environment for the imaging and cloning process. Everything is scripted in the PowerShell data language, which is executable by PowerShell.

Naturally, you just change it to match your topology.

Creating the Image and Its Clones

When we run this next script, it creates an image of the source database and then rolls out all your clones. You will notice that one of the clones is designated to be the "original." It is a bad name, but what I mean is that one clone is read-only and so provides a comparison point to find out the extent of any changes in the other clones. You need this both in testing and in development. In testing, you need to know of all data changes after a test run, and in development, we use it as a "long stop" to make sure we've saved any changes to the schema before reverting or dropping the clones. It is all too easy to get distracted and forget to save your work. This script, therefore, sets this "original" clone as read-only as soon as it has been created.

With this script for making new clones, we have the basics. When we want to reset the image to the latest build, we'll first need to delete all existing clones and then the current image, and for the time being, this step is still manual. To automate this, we will need a separate article and script because we need to do it carefully.

We'd want to ensure that we've checked every clone for changes and saved those changes before deleting it just in case the developer left work suddenly for the day without saving the work into Source Control. Well, I'd want to ensure this because I'm a kindly, avuncular, sort of person.

For our next trick, we will do a tear-down. By this, I mean reverting a clone to the state it was in when first created. I use this for running destructive tests on databases. Most integration tests are destructive because they change the state of the data and sometimes even the schema. This routine deals with all this. It is like the database version of a hot pressure wash.

Before deleting a clone and creating a fresh one from the current image, I'll use SQL Compare to compare to the clone I'm going to tear down to the original, read-only clone and generate a synchronization script, which it will save in the work folder. This means that developers who have forgotten to save off any changes to source control can simply access the fresh clone the next day and then run the synchronization script to recover their changes. With SQL Data Compare, you can do the same thing for data, but I haven't shown that.

The "clone reset" script uses the same configuration data file as before (from Listing 1). We place in the beginning of the script the name of the database name and server of the clone that we want to revert. I usually have this loaded in the PowerShell ISE and run it whenever I want to revert the database; but if a "tear-dow"' reset were part of a test script, it would need to be run automatically, so it might be better to have the reset information in a separate file.

Once you get over the diffuse anxiety surrounding any unfamiliar technology, SQL Clone opens plenty of opportunities. For development work, it means I can contemplate the sort of integration tests and regression test tasks that I generally recoil from because of the tedium and hassle. I have spent too many years with install-disks in hand, staring disconsolately out of server room windows at the evening sky, as red flashing lights in racks signal more tedious waiting. We now seem to have a better way of testing databases!

I can set up structured tests in parallel, run them, and clean up afterward to get ready for the next test run with the confidence of knowing that the data is in the same state. Not only that, but you can use test servers that don't require the usual huge disk capacity because the bulk of the data is on a nice, fast file share on a nice, fast network.

SQL Clone is easily scripted in PowerShell, so automated integration tests as part of a CI process should never hold any terror. In this article, I've shown how easy it is to get started with creating and reverting clones. Hopefully, it's a kick-start into automating away some of the more tedious aspects of development work.