Microservices are a common trend, and deploying them to the cloud is the prime factor of most projects nowadays. Important factors are zero downtime at peak hours, and how easily they can scale. We will be covering how to dockerize a Spring Boot application and deploy it in an ECS cluster in a private subnet with a load balancer in a public subnet.

Setting Up a VPC Network

In this article, we will discuss setting up the VPC with two private and two public subnets in two distinct availability zones. 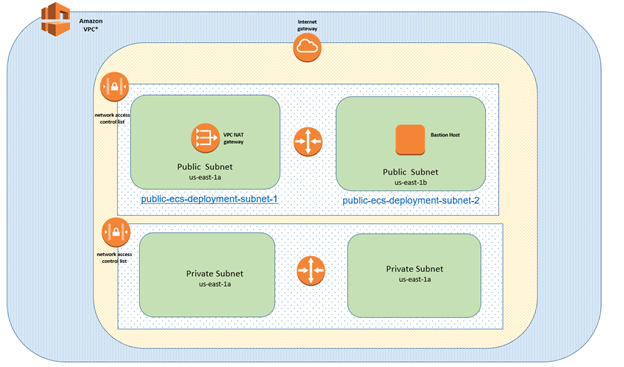 In the above design, the VPC will have a private subnet in two availability zones and the public subnets have to be in the same availability zone. Let’s go with definitions as per the diagram and then we will go on to how to set it up.

Setting Up the VPC

Create an Internet gateway and attach it to the VPC.

Create a NAT gateway with an Elastic IP associated with it.

Create two Network ACLs, one private and one public.

The public one should have inbound rules like below:

The private one should have inbound rules like below:

In the next article, we will be deploying the ECS Fargate instance in this VPC with an ALB.