Winds is a popular RSS and Podcast application provided by Stream — a service that allows you to build news and activity feeds. Winds is 100% open-source and the backend is easy to install in a local environment or in the cloud — a task that we will cover in this tutorial. To ensure that you make it through the tutorial, make sure to complete all of the prerequisites.

As with any tutorial, there are some requirements that come with it. For this post, you'll need to ensure that you have the following up and running, and ready to go prior to continuing on. If you decide to skip the requirements, you'll likely get hung up at one spot — and we don't want that to happen.

One additional thing that I'd like to mention is that you should have the following permissions (or similar) on your AWS account: 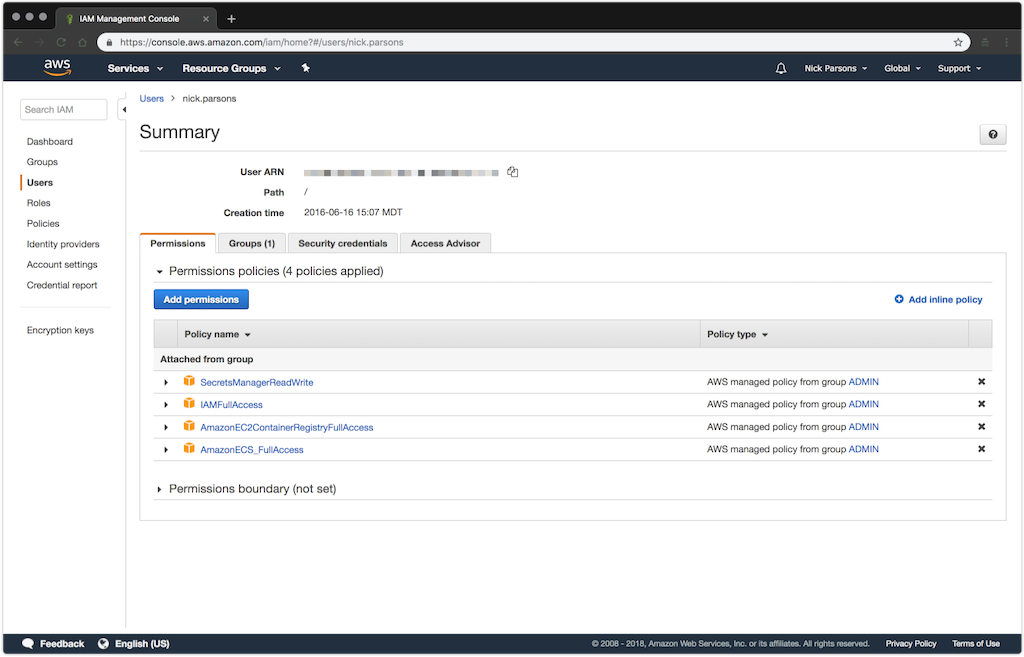 As we provided an exhaustive list above, hopefully you have had a chance to go through the various steps and copy your third-party URIs and credentials to move forward. The next step requires that we modify the docker-compose-aws file located in the /api directory of Winds.

The file will look like this when we start:

Fill in the credentials as instructed in the docker-compose-aws.yml file. Don't forget a random value for your JWT.

You should end up with a file that looks something like this:

Note: We're using the docker-compose-aws.yml file over a docker-compose.yml file because we have two docker-compose files inside of the same directory. By appending "-aws" to the file, we can easily specify what file want to hit when building the environment.

Getting up and Running With ECS CLI

What's important here is that the ECS CLI supports Docker Compose files, which is what we've used to define how our application can and should run in the cloud. While it's meant for multi-container applications (we have a file for this as well in docker-compose-aws.yml), we're going to be using a single container application for the purpose of this tutorial.

Let's go ahead and configure the AWS ECS CLI so that we can get up and running. First, we'll create a "profile" using the following command:

Next, well complete the configuration with the following command:

Creating a Cluster With an EC2 Task

1. Create a file named task-execution-assume-role.json with the following contents:

2. Create the task execution role (in the same directory as task-execution-assume-role.json):

Create a Cluster and Security Group

Next, we'll create an Amazon ECS cluster with security groups.

1. We've specified EC2 as the default launch type in the cluster configuration, so the following command creates an empty cluster and a VPC configured with two public subnets:

Note: This command may take a few minutes to complete while resources are created. You will also need to take note of the VPC and Subnet IDs that are created – we’ll be using those shortly.

2. Using the AWS CLI, create a security group using the VPC value from the output in the previous command:

In addition to the docker-compose-aws.yml file that we've created for you, you'll need to create an ecs-params.yml file with the following contents:

Note: This params file is specific to AWS ECS and is required if you want to run the Winds API on AWS. The values you need to specify can be found in your previous requests from above.

In this section, we'll outline how to build, tag, and upload the Winds API to Docker and AWS.

For this step, you'll need to login to Docker with the following command:

Then, run the following command to build the Docker image (you must be inside of the /api directory):

To start, you will need to get the Docker Image ID, you can run docker image list and it will output all of your Docker images. Grab the ID from the one tagged as "winds" and drop it in the command below.

The command you'll need to properly tag the image is:

Now, it's time to push the tagged image to AWS. You can do that with the following:

It will take around 30 seconds but when it's complete.

Deploying to a Cluster

Now that we have our files and infrastructure configured, we can go ahead and deploy the Docker compose file to ECS with the following command:

Note: By default, the command looks for files called docker-compose.yml in the current directory; because we have two files, we need to specify a different docker compose file with the –file option (or -f for short).

If all went well, you should see the following in your ECS console! If you click on the task, you will notice that there is a public IP address that will allow you to view the API (it should respond with "pong"). 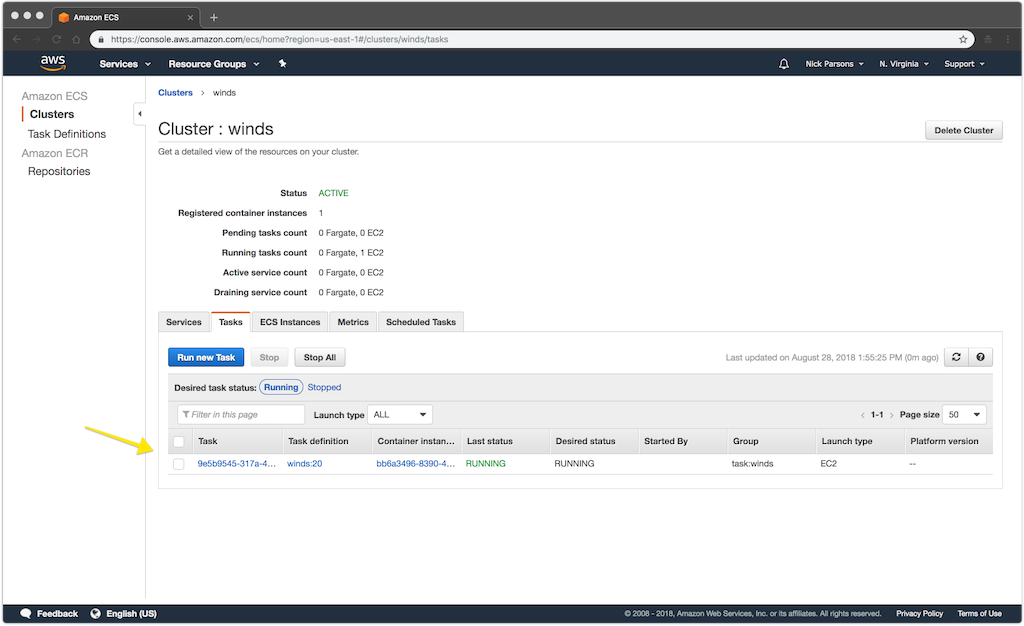 I hope that you enjoyed this tutorial on how to deploy Winds to AWS using Docker. In future posts, I'll outline how to do the same deployment but on Google and Digital Ocean.

If you're interested in deploying the front-end, check out this post, which outlines how to do so using AWS S3 and CloudFront.