Fake news is one of the more troubling trends of 2017. The term is liberally applied to discredit everything, from stories with perceived bias through to alternative facts and downright lies. It has a warping effect on public opinion and spreads misinformation.

Fake news is nothing new — bad journalism and propaganda have always existed — but what is new is its ability to spread through social media.

A quick note: For simplicity, in this post, we’ll limit the term "fake news" to describe completely fictitious and unsubstantiated articles (see examples like PizzaGate and the Ohio lost votes story).

How Is Fake News a Graph Problem?

To detect fake news, it’s essential to understand how it spreads online between accounts, posts, pages, timestamps, IP addresses, websites, etc. Once we model these connections as a graph, we can differentiate between normal behaviors and abnormal activity where fake content could be shared.

When we’re detecting fraud, we usually rely on verifiable, watch-list friendly, demographic data like real names, addresses, or credit card details. With fake news, we don’t have this luxury, but we do have data on social networking sites. This can give us useful information, including:

There are many ways to model this data as a graph. We usually start by mapping the main items to nodes: account, post, and article. We know that IP addresses are important, so we can add those as nodes, too. Everything else is added as a property:

Relying on algorithmic or manual detection isn’t enough. We need a hybrid approach that combines automated detection and manual investigation: 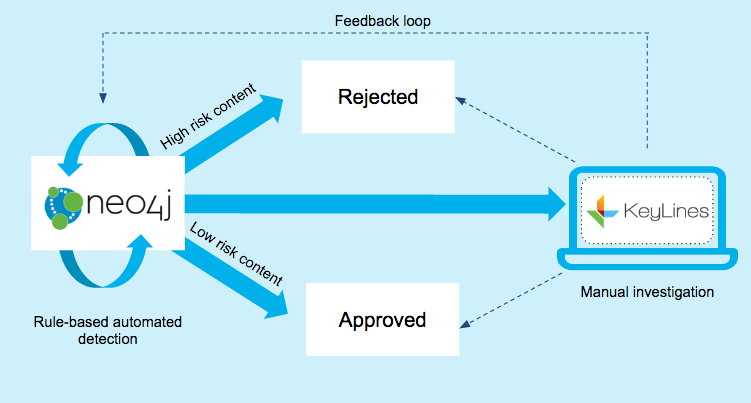 New behaviors are fed back into the automated process, so automated detection rules can adapt and become more sophisticated.

Once we’ve created our data store, we can run complex queries to detect high-risk content and accounts.

Here’s where graph databases like Neo4j offer huge advantages over traditional SQL or relational databases. Queries that could take hours now take seconds and can be expressed using intuitive and clean Cypher queries.

For example, we know that fake news botnets tend to share content in short bursts, using recently registered accounts with few connections. We can run a Cypher query that:

In Cypher, we’d simply express this as:

To seek out unknown fraud (cases that follow patterns that can’t be fully defined yet), our manual investigation process looks for anomalous connections. 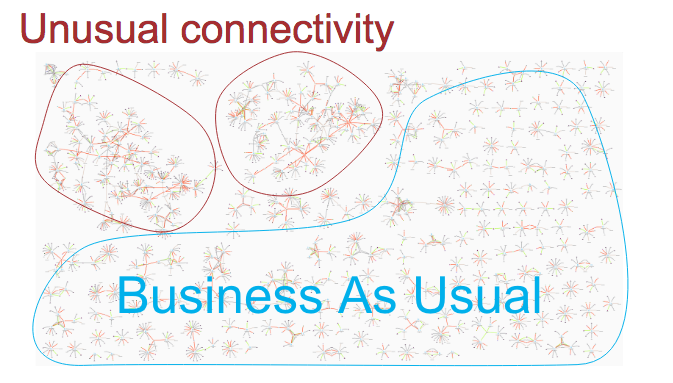 A graph data visualization tool like KeyLines is essential for this.

Let’s define a visual graph model so we can start to load data from Neo4j into KeyLines.

It’s not a great idea to load every node and link in our source data. Instead, we should focus on the minimal viable elements that tell the story and then add other properties as tooltips or nodes later.

We want to see our four key node types with glyphs to highlight higher-risk data points like:

This gives us a visual model that looks like this:

To find anomalies, we need to define normal behavior. Graph visualization is the simplest way to do this.

Here’s what happens when we load 100 Post IDs into KeyLines:

Our synthesized dataset is simplified, with a lower rate of sharing activity and more anomalies than real-world data. But even in this example, we can see both normal and unusual behavior: 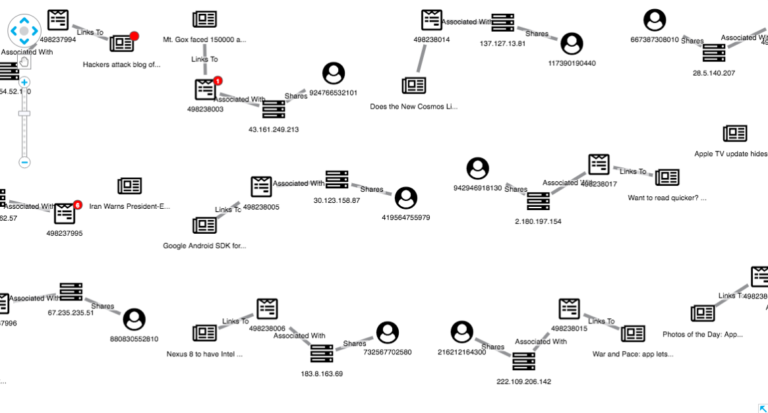 Normal posts look similar to our data model — featuring an account, IP, post, and article. Popular posts may be attached to many accounts, each with their own IP, but generally, this linear graph with no red glyphs indicates a low-risk post.

Other structures in the graph stand out as unusual. Let’s take a look at some examples.

New users should always be treated as higher risk than established users. Without a known history, it’s difficult to understand a user’s intentions. Using the New User glyph, we can easily pick them out:

A non-suspicious post being shared by a new user. 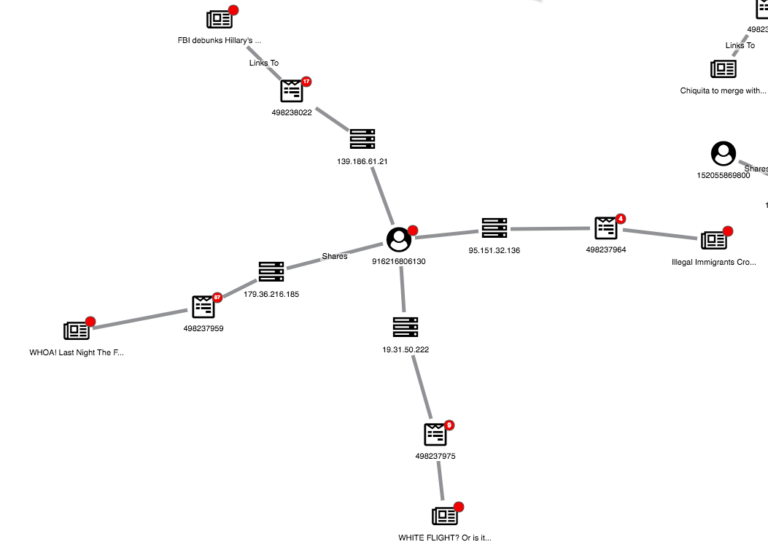 This is structure is much more suspicious, with a new user sharing flagged posts to articles on known fake news domains.

We can also use a graph view to uncover suspicious user behavior. Here’s one strange structure: 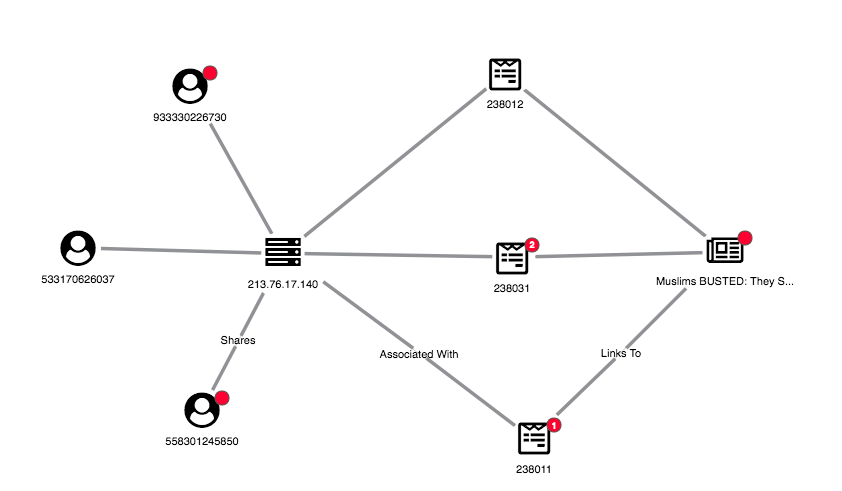 An anomalous structure for investigation.

We can see one article has been shared multiple times, seemingly by three accounts with the same IP address. By expanding both the IP and article nodes, we can get a full view of the accounts associated with the link farm.

In addition to monitoring users, social networks should monitor links to domains known for sharing fake news. We’ve represented this in our visual model using red glyphs on the domain node. We’ve also used the combine feature to merge articles on the same domain:

This view shows the websites being shared, rather than just the individual articles. We can pick out suspicious domains:

Try It for Yourself

This post is just an illustration of how you can use graph visualization techniques to understand the complex connected data associated with social media. We’ve used simplified data and examples to show how graph analysis could become part of the crackdown on fake news.

Published at DZone with permission of Dan Williams. See the original article here.