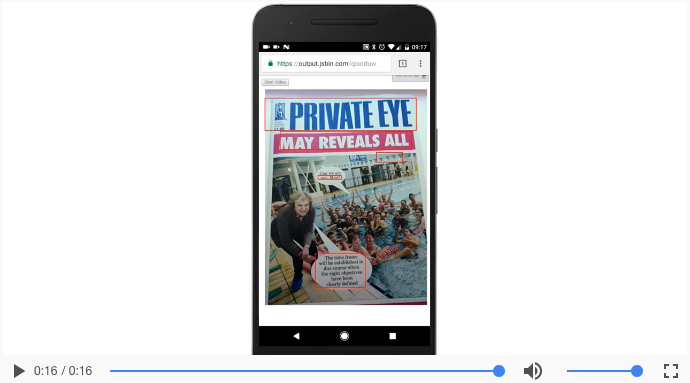 Last year just before the Chrome Dev Summit, Miguel Casas came up to me and showed me something that blew my mind: in the browser using the Shape Detection API. Shortly after that that allowed me to update my QR Code scanner so that I no longer had to include a massive (albeit awesome) port of a QR scanning library.

The Shape Detection API is still in development, and neither the FaceDetection nor the Barcode Detection APIs are available outside experimentations (you need to enable "Experimental Web Platform features" in chrome://flags) but it is a very exciting space to watch and see another platform capability being opened up to developers and users on the web.

The latest addition is the Text Detection API that will take an image and scan it for readable text. The video at the top of this article is a great example (note, I stole some of the code from Miguel but put my own spin on it, notably the synthesis part.)

The model is exactly the same as the Face and Barcode Detection APIs, you get an image (either an img, canvas, or ImgData object) and pass it into an instance of the type of detector you want to use. You can the process the results and perform some action on the data (for example draw on the image where the item was detected). In this case, the results are an Array of DetectedText which you can use to extract what text was detected.

This currently works only on Chrome Canary for Android, but if you want to experiment check out the code and the demo, and the process isn't too painful although my code is incredibly hacky. I quite like this demo, it detects text in the image, draws a box around the text and then when the user clicks inside the bounding box, it will read the text back to the user.

The API is not amazingly complex. If you wanted to implement something yourself you can follow these steps:

Query the list of mediaDevices and select the first camera that is front-facing (note: there are better ways to do this).

3. Create a TextDetector and Start Detection

For each item that is detected and element will appear in the array that is passed to the Promise returned from the detect function. You can then itterate over this array, find where they are positioned in the image, and get access to the data detected.

Yup, I Am Excited!

This API opens up so many interesting possibilities for users such as easier and broader access to assistive technologies for parsing content in images; real-time translation of text in images; extracting urls for slides at conferences (totally going to try and get a web app ready for Google IO that does this)... these are just a few examples that quickly spring to mind.

What would you do with this API?