we have been doing continuous delivery at wix for several years now and as part of that, i have been training my team at the methodology of devops and changing the company’s culture. last week i was trying to explain to some colleagues how we work at wix and about our dev culture. while doing it i realized that we are doing much more than just devops. what we actually do is something i call “developer centric culture” or in short “ dev centric ” culture.

what is dev centric culture?

dev centric culture is about putting the developer in the middle and create a support circle around him to enable the developer to create the product you need and operate it successfully. 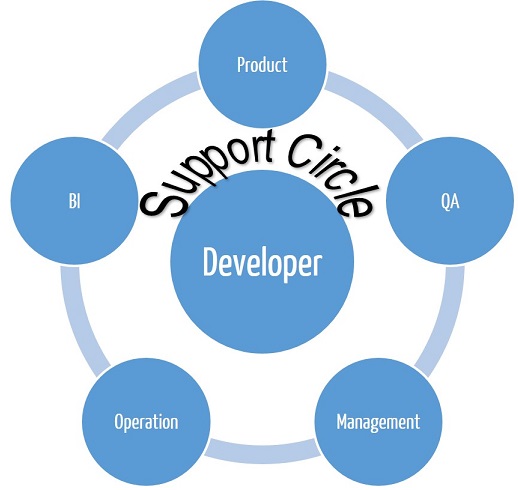 before i go into details about dev centric culture and why is it good, let’s look on the problems we have, what we are trying to solve, and why it is more than just devops.

let’s take a look at a traditional development pipeline.

when you have a team of architects doing all the design and telling developers what to do, you again have a wall because developers might not understand the system’s architecture and will not build what the architect intended.

then comes the last phase, where operations gets a hold of the product and they are responsible for deploying and monitoring a product they know nothing about.

so when something bad happens there is no one who is actually responsible to the product and you start with a blame game.

so as you can see there are many walls in the process that we need to break in order to have better quality.

so let’s see how we can break these walls, and how “dev centric” culture helps us with that.

now if you think about a very small startup the developer is the key, and does everything from talking to customers, defining the product, designing the system, writing the code, and deploying and maintaining it in production. this is also the phase where the startup is the most agile and progresses very quickly. now if the startup succeeds and grows, more people join the company and slowly build walls around the different departments that eventually hurt productivity.

now let’s see in more detail what walls we have that need to be broken down, and how “dev centric” culture can help break them down and improve the quality and agility of the whole organization.

in many organizations, once the product manager is finished with the product definition, the “ball” is in the architect’s court. the architect designs the system and hands the design to the developers to develop the application. in this scenario, the developers don’t completely understand the architecture and may not produce what the architect intended. another side effect is that we treat the developer as a coder and not as a software engineer, thus limiting their ability to cope with the complexity of designing a good product. this also creates a big workload on the architect who now has to supervise the engineering work and make sure they follow the design.

by doing this you invest in your team and grow their knowledge, quality and abilities, thus creating a better product and better developers.

when developers finish their work and hand it over to qa they are being put in a state of mind that they hand over the responsibility of ensuring the quality of their work to someone else. instead of owning the product that they have just written, it is up to somebody else to find their bugs. this case causes developers to not invest too much in the quality of their code and not feel responsible for their own work quality. now when a bug is found in production, the developers believe that it is qa's fault for not finding the bugs.

the solution for this problem is really simple. you need to make your developers write tests and be responsible for their own work. the only way to do that is to start doing test driven development. developers who work in tdd write better code and their designs are much better because it has to be testable, with the right abstractions and separation of concerns.

now for developers who are not used to writing tests this can be a challenge, but from my experience, once they do that long enough, the developers understand the benefit of tdd and never want to go back to not writing tests.

developers should write both unit tests and integration tests. for back-end development this is usually enough, no qa is necessary unless in very rare cases where changes are very deep and might affect other systems. at wix the back-end group works without any qa.

now you might think that if developers do their own testing, what do we need qa for. well you still need qa, but qa should change their role. instead of verifying the developer’s work quality they should complement the developer’s tests by writing automated system tests (end-to end) and in some cases do manual qa for ui components during development until an automated test is created for them.

make the production environment visible in a developer friendly way. via a monitoring system and easy access to logs (log aggregation), developers should see how their system behaves in production at all times. this creates a better quality product because now the developers are also responsible to their work in production. every time there is a problem in production, the developer should be alerted and handle it in production with the help of operation engineers.

we see bi as a business concern and generate reports to marketing and management, while the developers are not exposed to most of them. this creates a lack of knowledge of what is going on with the system and how it is used by the customers. if the developer does not know how a system is used they will not be able to make improvements on the parts that really matter.

maintaining a dev centric culture is not easy. you put a lot of responsibility in the hands of the developers. you actually give all responsibility to the developers. but if you think about it, this is exactly what you should do. the developers are your company assembly line, they are the ones who actually create the product. they have a direct impact on the company’s success and bottom line. by understanding that and entrusting the developers with the power to change and take critical decisions it is a win-win situation.

remember developers can do the work of a product manager, architect, qa and ops, in fact this is exactly how a small startup succeeds, because developers actually do all of it.

what do you think is it time to go back to the future by breaking all the walls?

next chapter: dev-centric trust and collaboration

Published at DZone with permission of Aviran Mordo. See the original article here.