Developers (Dev), Site Reliability Engineer (SRE), and Operations (Ops) are job types, while DevOps is a system. If we take a soccer analogy, Dev, SRE, and Ops correspond to positions like forward, midfield, and back, while DevOps is a formation like 4-3-3.

Also called Development Engineer, Software Engineer (SWE), Software Developer, or simply Developer (Dev). Their primary responsibility is to write code and implement software business logic. The logic could be fulfilling a grocery order, scheduling a cab to your place, etc. Developers mainly deal with the code.

Also called IT Operations, Production Engineer (PE), or simply Operations (Ops). They are responsible for data center management, machine installation, network wiring, monitoring, and alerting. In the early days, a large amount of the operations’ work deals with physical equipment. This work requires a lot of manual intervention and is risky. In the last ten years, as Cloud services gradually replace the physical data center, the traditional operations workload has been significantly reduced, and the pure Ops job has ceased to exist. 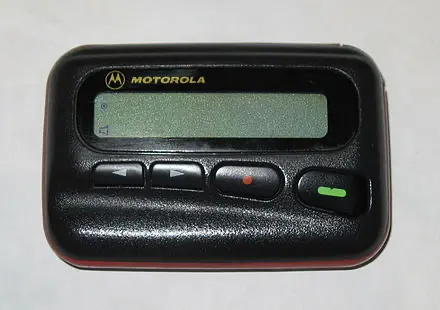 Veterans all remember the exciting days of carrying such a pager to be standby 7x24.

Site Reliability Engineer (SRE), coined by Google in 2003. The following factors contribute to the birth of this role:

1 and 2 prompted the need for a specialized job function, of which 2 also balances the development pace (please do not break that much), while 3 provides the labor supply for SRE. Since SRE’s primary responsibility is to ensure service stability, it’s a natural transition for Ops to move into an SRE role.

Thus SRE is to address the reliability issue for large-scale service in a systematic way.

SRE differs from Ops in the following ways: 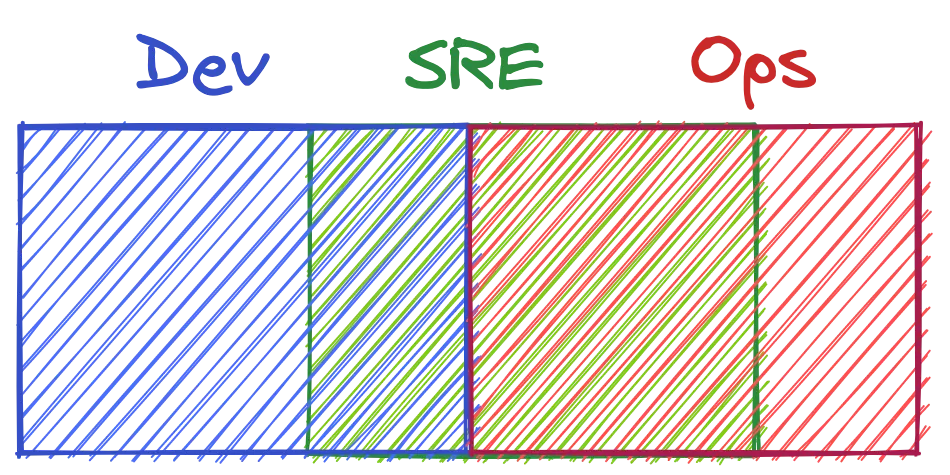 The above diagram depicts the boundary between Dev, SRE, and Ops. There is no intersection between Dev and Ops, while SRE, as mentioned earlier, is Ops with Dev skillset, but still a bit more on the Ops side.

SRE gradually takes over the Ops role and becomes the one carrying the pager.

DevOps is a system. As just mentioned, there is no intersection between Dev and Ops work, while DevOps is to combine these two work types. More precisely, DevOps is to let Dev take on the Ops work. Under DevOps, there is no traditional Ops role, and Dev and SRE may share the Ops responsibility. And there is a trend that more organizations adopt pure DevOps. These engineering shops assign all Ops responsibility to the Dev team, which further eliminates the SRE role. Under such a setup, it's the Dev team carrying the pager.

Why People Get Confused

With the advent of Cloud computing, many Ops job duties no longer exist, and the pure Ops role will cease. But there remains the question of the dynamics among Dev, SRE, and DevOps roles. Which mix will become mainstream in the next ten years?

Dev and SRE belong to different groups and always have a love and hate relationship. On the one hand, they share the same goal to deliver a better service to the end user. On the other hand, they achieve the goal from a different angle. If we take a look at the DORA four key metrics:

The first two measure velocity, and the last two measure stability. In a group containing both Dev and SRE, Dev optimizes for velocity, and SRE optimizes stability. Some elite groups can simultaneously achieve better velocity and stability by delivering frequent incremental changes. However, many groups are battling between velocity and stability. As we all know, push to production is the No 1 reason causing production outages. That’s also why many engineering teams employ the no Friday release policy.

This battle would never end as long as there are separate Dev and SRE teams. But there is a light ahead thanks to the proliferation of Cloud infrastructure, SaaS, and Open Source.

While the physical pagers can only be memorized in the computer science museum nowadays, the Ops responsibility and spirit are carried over by services like PagerDuty, Datadog.

Devs are now quite capable of taking over Ops work. First, much less firefighting since the Cloud service is much more stable than the in-house one. Second, tools to handle Ops work are more accessible to average engineers. Thus we believe DevOps will further thrive and become dominant, and the pure Dev and SRE role will diminish and only be observed in very large engineering shops down the road.

Published at DZone with permission of Tianzhou Chen. See the original article here.