Much like the general architecture that we developed for the backend web service in Creating a REST Web Service with Java and Spring (Part 1), many web applications follow the same basic architecture. Starting from the components closest to the user, we have a UI that is the most direct interconnection with the end-user of the system. Between the UI and the web service we are interfacing with, we have a service layer that abstracts the interaction with the web service, encapsulating the Hypertext Transfer Protocol (HTTP) actions (such as GET, POST, etc.). Lastly, we have resources, which are produced by the web service and displayed by the UI layer.

While there is a tendency to display any layered architecture in a strictly hierarchical manner (with one layer directly above the other), it is more beneficial to look at our architecture in terms of the interactions between the UI layer, service layer, and resources, as illustrated in the following diagram: 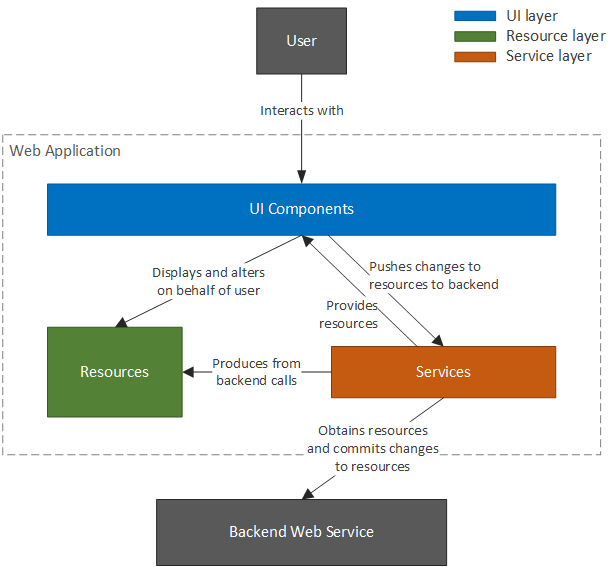 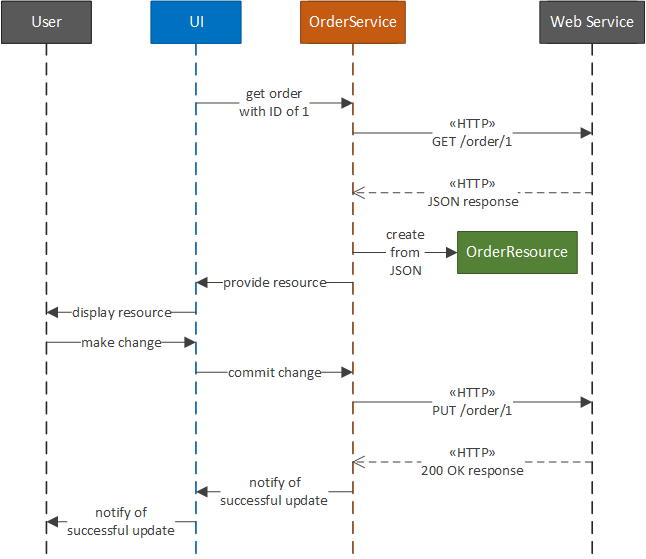 The first step to implementing our resource layer is to enumerate the resources that we will have in the system. Since we are interfacing with a simple web service, we only have one resource: Order. Based on the design of our web service, we expect the resource to be sent to us by the web service to resemble the following (in Javascript Object Notation, JSON):

This means that we have to ensure that our Order resource can be deserialized from the above JSON and be usable by our UI layer. To do this, we create the following set of classes:

It is important to note that the Order class contains a deserialize and a serialize method, which allows for an Order object to be created from a raw JSON order resource and for an existing Order object to be serialized into a raw JSON order resource. There are two main reasons while we manually perform serialization and deserialization, in spite of Typescript's ability to automatically perform these operations:

This second issue is very difficult to surmount without manually creating the desired object (using the new operator). For more information on this known issue, see this StackOverflow post. Therefore, we will manually perform the serialization and deserialization of our Order objects. In a larger system with many more resources, this may be untenable. In that case, further exploration of Typescript's deserialization and serialization techniques would be in order.

The next decision that must be addressed is the privatization of the costInCents field. The web service we are interfacing with stores the cost value in cents so that it does not have to manipulate decimal places (which can easily cause pennies to be lost). Although the backend web service maintains its cost value in such a manner, there are multiple benefits for our Order resource to deal with the cost in decimal.

Foremost among these is displaying the cost in a human-readable manner. For example, it would be a mistake to display the cost in cents to the user, rather than displaying it in dollars, such as $4.56. Secondly, the UI will likely be changing the value in terms of a decimal. For example, the input field that allows our Order resource to be edited will likely include a decimal so that the user can input the value as 4.56 rather than 456. Therefore, we will use the encapsulation provided by Typescript classes to maintain the internal state of our cost in cents, while allowing outside components to alter or read the cost in terms of decimal dollars.

Since this conversion logic (between cents and decimal dollars) can be difficult to get correct, it is a good idea to include automated unit tests to exercise this functionality. Although automated unit tests are often associated with backend development in Java, Ruby, Python, or another typically non-frontend programming language, the Angular project we generated includes native support for automated unit tests in Jasmine. The unit test specification for our Order class is listed below:

Prior to setting up our test suite and individual test cases, we create an OrderFactory, which will help in the creation of the Order objects we want. For example, since we are testing the cost value of our Order resource, we create a factory method, createWithPrice, for creating Order objects with a specific price. Next, we establish our test suite using the describe method (provided by Jasmine); within this test suite declaration, we add individual test cases using the it method. In each of the test cases, we simply create an Order resource with the desired cost in cents and then make an assertion about the output of a method using the expect method.

Although we have only used the basic functionality of Jasmine, there are many other powerful mechanisms included that make Jasmine very similar to a standard unit testing framework, such as JUnit, in terms of its functionality. For more information on creating Jasmine tests, see the Jasmine Introduction page. To run our unit tests, simply execute the following command:

Once the tests are compiled and executed, a browser window will open. The contents of the new window should resemble the following, indicating that all tests have passed:

In the next article, we will continue implementing our web service, starting with the service layer and ultimately culminating with the completion of the UI layer and the usage of our web application to interface with our order management web service.