this week, we wanted to “double-click” and highlight a new survey published by quali systems recently. as reported by alison denisco and joe mckendrick on techrepublic and zdnet respectively, the survey- which covered more than 2,000 it industry executives- revealed some eye-grabbing statistics about the realities of self-service infrastructure, in regards to modern software delivery. additionally, it shone a light on devops adoption- where, apparently, many enterprise organizations are still struggling to get their programs fully off the ground.

according to the survey, more than half of respondents said they had no access to self-service infrastructure, and instead, use a ticket-based approach for infrastructure delivery. in addition, only 23% of executives who took the survey said infrastructure could be delivered in less than 24 hours, while 18% said it would take less than one week, and 33% said it takes up to a month to do so. the rest (26%) said it takes at least one month or longer. yikes! 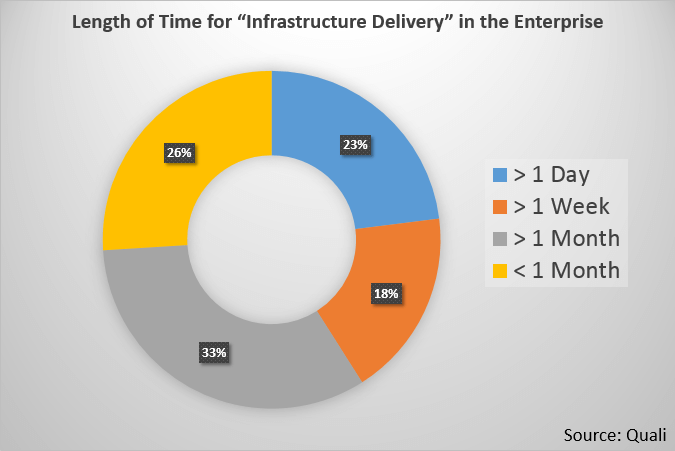 as mckendrick reminds us, “self-service access to infrastructure is another hallmark of devops, since both development and operations teams need to be able to view the same online environments.”

being able to spin-up environments quickly, on-demand, and ensure fidelity of environments throughout the pipeline is essential for devops. the negative impact on productivity and time-to-market alone is real, not to mention that when configuration and deployments are done manually, these processes are extremely error-prone and can lead to failures in production, and time spent on troubleshooting and mitigating these issues.

there is a better way

the state of devops report (produced annually for the past five years thanks to research from puppet and dora) includes data points from more than 25,000 it professionals to better understand how the nature of devops impacts modern it practices. these data points show that enterprise it organizations with vigorous devops programs tend to deploy software 200 times more frequently than the low performers, and those it departments also had 24 times faster recovery times, and three times lower change failure rates. additionally, high-performing it teams spent 50% less time remediating security issues, and 22% less time on unplanned work (and rework), not to mention enjoying the benefit of shorter lead times by 2555 times the low-performing it departments.

organizations today understand the benefits of devops and the roi of optimizing their software delivery pipeline. but how do we get there? the top implementation challenges largely revolve around where and how to begin such a monumental shift, and how to scale a devops transformation throughout the organization.

in the new devops handbook , written by gene kim, jez humble, patrick debois and john willis, the authors list several prerequisites and patterns for succeeding with devops. among these are version everything, support push-button builds and deployments, treating your servers as cattle, not pets, and more. so where do you start? from ci? configuration management? environment provisioning?

well, guess what- deployment automation encompasses all of these!

we said it before : to accelerate your devops adoption and get the biggest bang for your buck, focus on deployments! 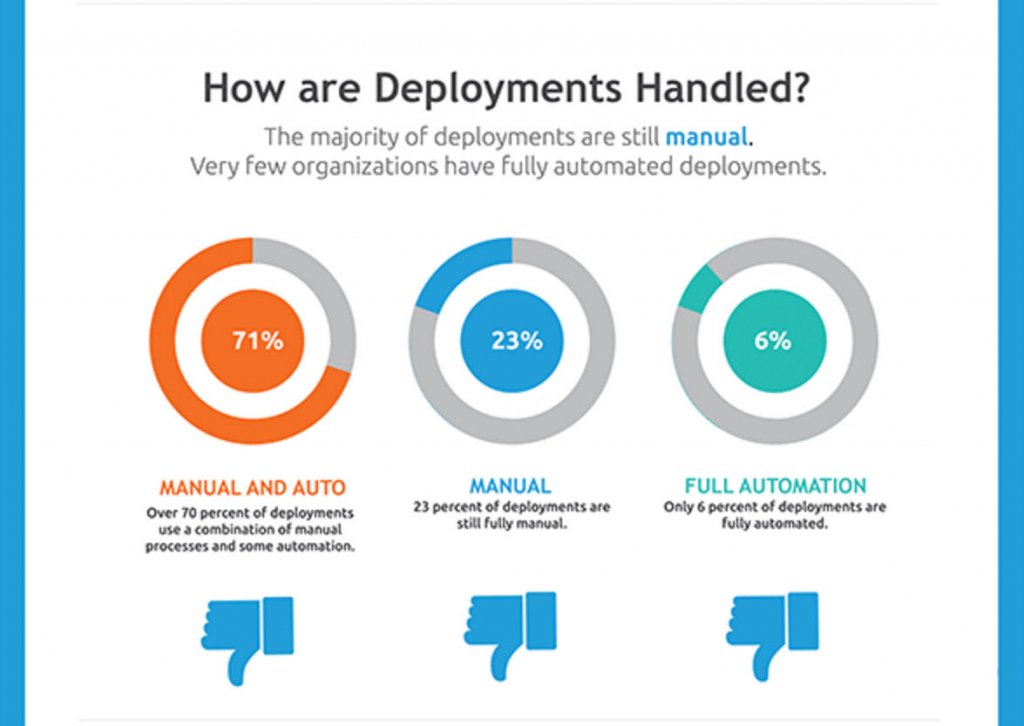 when we polled thousands of engineers and it leaders at major industry events, we were most interested to learn about their deployment and application release automation practices. similar to quali’s survey, we also found that the majority of deployments are still manual- very few organizations actually have fully automated deployments.

we also identified the top challenges organizations face when leveraging manual deployments instead of automation:

overall, many it departments are still struggling to release software with the reliability and speed that the business demands. deployment automation can help eliminate these challenges and accelerate your devops transformation. by adopting deployment automation, organizations can drastically cut cycle times, accelerate software releases and reduce development backlogs and other bottlenecks.

gartner’s magic quadrant for application release automation , also highlights ara- which deployment automation and release coordination are key tenants of- as the most important technology to an organization’s adoption of devops.

to learn more about some of the data behind the focus on deployment automation and its impact on devops, read anders wallgren’s previous article here .