"A good start is half the battle."

We can’t agree more. But with DevOps, a good start remains impossible for most of the organizations.

This saying applies everywhere, including software development methodologies. While everyone is seeking the perfect way to deliver software faster, Agile and DevOps models are failing to meet the expected picture of delivery and software quality.

And statistics can prove it.

Through 2023, 90% of DevOps initiatives will fail to fully meet expectations due to the limitations of leadership approaches, not technical reasons, according to one article from Gartner)

Within a very short period of time, a huge number of articles, debates, posts, success stories, and reasons for failure made DevOps an interesting topic to explore. Due to its potential to overcome the problem of speed and quality of software, DevOps is a really a great approach, mindset, and culture.

Before we decode the reasons behind DevOps failures, the important part is to understand what actually DevOps is.

Despite the infinite definitions and understating, DevOps fails at execution. Even leading organizations with the best resources are failing to get DevOps implementation right.

And there are some legitimate reasons. 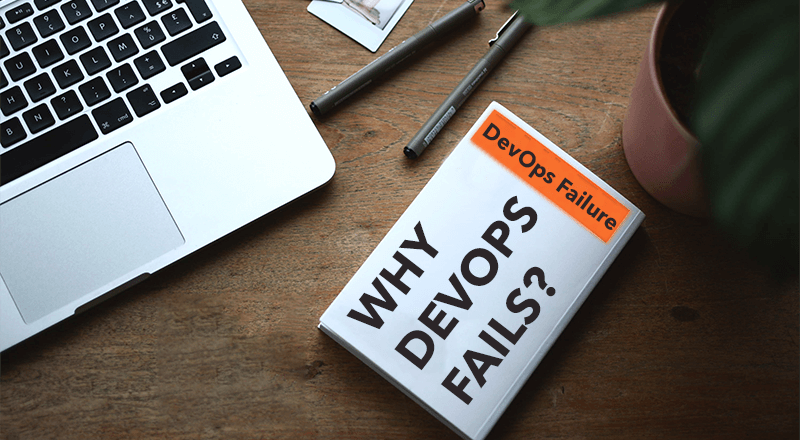 We know that failure happens; it’s not a big deal and it is the first step towards success. But there are some mindset and fundamental changes one should adopt in order to create a DevOps success story.

The Reasons For DevOps Failures

Not Creating a DevOps Culture

This point breaks the most-discussed myth of the DevOps concept.

Before we dig a little further, it is important to know why culture is important. Culture is a set of practices, standards, beliefs, and structure that reinforce the organizational structure. DevOps is not only a set of tools; you must create a culture of DevOps in your organization to get the results you seek.

A U.S. government agency that adopted DevOps for continuous deployment failed to identify the importance of people and process, which led to misconduct and confusion among developers and key people.

“Tools are not the solution to a cultural problem” -George Spafford, Research Director at Gartner said.

Gartner carried out their Enterprise DevOps survey in 2017. In that survey, 88% of respondents said "team culture" was one of the major people-related attributes having the greatest impact on DevOps success.

When DevOps was at its introductory stage, the team at IBM also was unable to get the essence of DevOps and could not bridge a gap between Development and Operation team. Later on, the team identified that the environment was not suitable for faster releases and strict deadlines and therefore there was a gap between the development and operations.

How Can You Set The Right DevOps Culture?

There are many ways and practices which can help implement DevOps with guaranteed result. Most often, organizations are running after tools and not cultural shift making it the biggest cause of DevOps failure.

Not Defining DevOps for Your Organization

Okay, here is the truth.

In this digital era, every organization is a technology-driven organization regardless of the domains. The journey from digital transformation to continuous digital journey demanded flexibility, agility, and quality as most-focused aspects.

DevOps has become a need for organizations that are associated with software delivery or often releasing an update or new features in order to serve their customers with quality and superiority.

A Lack of DevOps Vision

DevOps should be defined in line with business goals in order to make it successful approach to software development.

Identifying what DevOps means for your business can make you think into broader perspectives like:

Try to answer all these questions and it will be easier for your organization to visualize overall DevOps picture.

Automation And Speed: It’s Not What You Think

According to this article that talks about DevOps failure stories, Knight Capital, a real-time stock trading company, used automation to make transactions faster and easier for its users. When writing new code for the app, the new code accidentally called an old feature which was inactive but not removed from the internal application.

As a result, Knight’s app created orders worth billions of orders within minutes and the company had to pay a $640 million fine resulting in bankrupt.

There is a lesson for all of us.

Often, organizations misinterpret the use of automation. DevOps automates the software development process with the help of continuous integration and continuous delivery (CI/CD) principles. There are a huge number of tools available for code repository, testing, maintenance, and storage.

Automation is powerful, but one should not forget the power of a machine-man combination for greater accuracy.

Up to this point, we discussed organizational change exclusively; now we are moving ahead with the people.

DevOps Empowers Everyone In The Team; Leaders Should Take Notice

DevOps can’t be implemented with the help of only tools. People are often one of the main reasons for DevOps failures. It can’t be revolved around only development and operation teams.

DevOps requires the involvement of all the people in the team who consider collaboration as an essential trait. To make DevOps successful, you need to identify the right people, train them, give them time to experience DevOps culture, and let them learn while working with utmost attention on the consequences of their actions.

One of the software engineers from SlideShare was reorganizing the columns of the database in one database-related tool in order to sharpen his own understanding. At the same time, he wasn’t aware that he was also changing the orders of the columns in the actual database. This overall act resulted in the unavailability of the server for many users.

DevOps focuses on people and culture more than the tools for rapid delivery of software with maximum efficiency. Shift your perspective towards people as they are one of the fundamental drivers of DevOps.

Create Your DevOps Infrastructure With a Toolchain in Mind

DevOps automates development, delivery, and deployment. It is of utmost importance that the infrastructure set up has a faultless strategy to plan, verify, sync, and monitor the DevOps toolchain to avoid bigger loss.

What’s more important is continuous inspection and measurement to take the necessary actions to get the expected outcome from DevOps efforts. DevOps requires a faultless set up of tools and their dependencies in order to plan, manage, configure, manage, and verify all the processes.

We hope that these points decoded the reasons behind DevOps failure.

Also, if you have adopted DevOps and have a failed attempt, you can share your story with us. That will help you understand DevOps more precisely.

This Is Why Your DevOps Meetings Fail Every Time

How to Continuously Improve Your Incident Management Practices