The re-invention of the IT department is well underway. The end result will put technology at the core of every organization.

Gone are the days when IT was perceived as a cost center whose role was to support the company's revenue-generating operations. Today, software is imbued in every facet of the organization, whether the company makes lug nuts or space crafts, lima beans or Linux distros.

The nexus of the IT transformation is the intersection of three disparate-yet-related trends: the merger of development and operations (DevOps), the wide-scale adoption of agile-development methodologies, and the rise of hybrid, public, and private clouds.

In a September 12, 2014, article, eWeek's Chris Preimesberger quotes a 2013 study by Puppet Labs indicating the switch to DevOps is well underway: 66 percent of the organizations surveyed had adopted DevOps or planned to do so, and 88 percent of telecoms use or intend to use a DevOps approach. The survey also found that DevOps companies deploy code 30 times more frequently than their traditional counterparts.

Closing the Loop That Links Development and Operations

A successful DevOps approach requires a closed loop connecting development and operations via continuous integration and continuous deployment. This entails adoption of an entirely new and fully automated development toolset. Traditional IT systems simply can't support the performance, scalability, and latency requirements of a continuous-deployment mentality. These are the precise areas where cloud architectures shine. 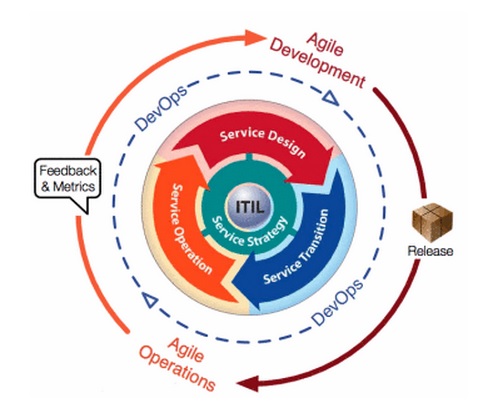 Agile development combines with DevOps to create a service-based approach to the provisioning, support, and maintenance of apps. Source: Dev2Ops

For example, the Morpheus database-as-a-service offers ultra-low latency via direct patches into EC2 and colocation with among the fastest peering points available. You can monitor and optimize your apps in real time and spot trends via custom metrics. Morpheus's support staff and advanced robots monitor your database infrastructure continuously, and custom MongoDB and MySQL storage engines are available.

Developers steeped in the tradition of delivering complete, finished products have to turn their thinking around 180 degrees. Dr. Dobb's Andrew Binstock explains in a September 16, 2014, article that continuous delivery requires deploying tested, usable apps that are not feature-complete. The proliferation of mobile and web interfaces makes constant tweaks and updates not only possible but preferable.

Pushing out 10 or more updates in a day would have been unheard of in a turn-of-the-millennium IT department. The incessant test-deploy-feedback loop is possible only if developers and operations staff work together to ensure smooth roll-outs and fast, effective responses to the inevitable deployment errors and other problems.

Integrating development and operations so completely requires not just a reorganization of personnel but also a change in management philosophy. However, the benefits of such a holistic approach to IT outweigh the short-term pain of the organizational adjustments required.

A key to smoothing out some of the bumps is use of a hybrid-cloud philosophy that delivers the speed, scalability, and cost advantages of the public cloud while shielding the company's mission-critical applications from the vagaries of third-party platforms. Processor, storage, and network resources can be provisioned quickly as services by using web interfaces and APIs.

Seeing Apps As a Collection of Discrete Services

Imagine a car that's still drivable with only three of its four wheels in place. That's the idea behind developing applications as a set of discrete services, each of which is able to function independently of the others. Also, the services can be swapped in and out of apps on demand.

This is the "microservice architecture" described by Martin Fowler and James Lewis in a March 25, 2014, blog post. The many services that comprise such an app run in their own processes and communicate via an HTTP resource API or other lightweight mechanism. The services can be written in different programming languages and can use various storage technologies because they require very little centralized management. 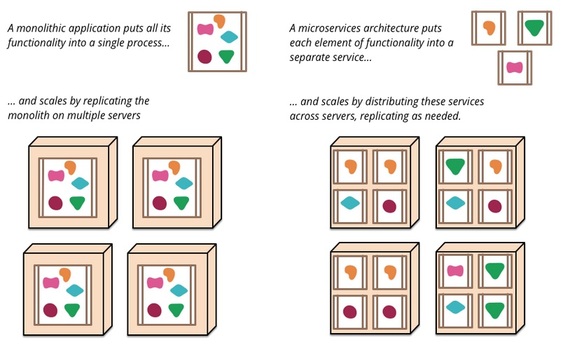 The microservice architecture separates each function of the app as a separate service rather than encapsulating all functions in a single process. Source: Martin Fowler

By using services rather than libraries as components, the services can be deployed independently. When a service changes, only that service needs to be redeployed -- with some noteworthy exceptions, such as changes to service interfaces.

No longer are applications "delivered" by developers to users. In the world of DevOps, the team "developing" the app owns it throughout its lifecycle. Thus the "developers" take on the sysadmin and operations support/maintenance roles. Gone are the days of IT working on "projects." Today, all IT staff are working on "products." This cements to position the company's technology workers at the center of all the organization's operations.