Five or so years ago, when I began my own DevOps journey, I had a sense of the potential gains we could make but there weren't any success stories or data from companies like ours at that time. I understood the what and the why although my why at the time was to gain the trust of our business partners because I felt it was badly damaged after years of under-delivering on our promises. As a servant leader, I understood the cultural aspects and our team, after some initial heavy lifting, started to see some tremendous gains in speeding up our daily work through automation and in turn freed us up to be more productive. We were even partnering with Security back then as it just seemed obvious to me that we had to get them onboard.

Today, there are numerous success stories from all sorts of companies including old, highly regulated, Fortune 100 companies that look and feel like worse case scenarios for DevSecOps. Their stories and the personal journeys of DevSecOps practitioners give us concrete examples of the kinds of gains you can expect to see on your own journey. The numbers are compelling reasons to embark on your own DevSecOps journey if you haven't already.

One of my favorite example comes from our own customers whom I've witnessed launch and roll our DevSecOps initiatives over the last few years.

A financial services company that had 800 open source components under management in their manual approval process that took three weeks adopted our Firewall solution to automate that process. They deleted all of the components in their Nexus Repository and started re-running their build with Firewall turned on and 30 days later discovered:

There is so much focus on shifting left and empowering developers that it is easy to overlook the impact Operations and Security teams are enjoying all the way to the right, in Production. Putting a high quality, secure application in production is a great start but what happens when a Zero-day vulnerability is announced? The last couple of years has seen several nasty vulnerabilities announced that have led directly to well-known data breaches. When I talk to our customer about how our solutions help in their Priority Incident Response Teams (PSIRT) the answers all tend to be the same:

The above examples are real-world proof of the types of gains so many teams are seeing in a variety of industries. The stories have been rolling in for years now and showed be a big enough carrot for organizations to be running toward DevSecOps if they're not already. If, for some reason, they're still not enough, let me offer you this stick.

Depending on which accounting you read it took either 2 or 3 days for an exploit to happen after the vulnerability was announced. This was a fairly big reduction in the times attackers were able to weaponize a new known vulnerability. The chart below shows the average time for such weaponization over the years. 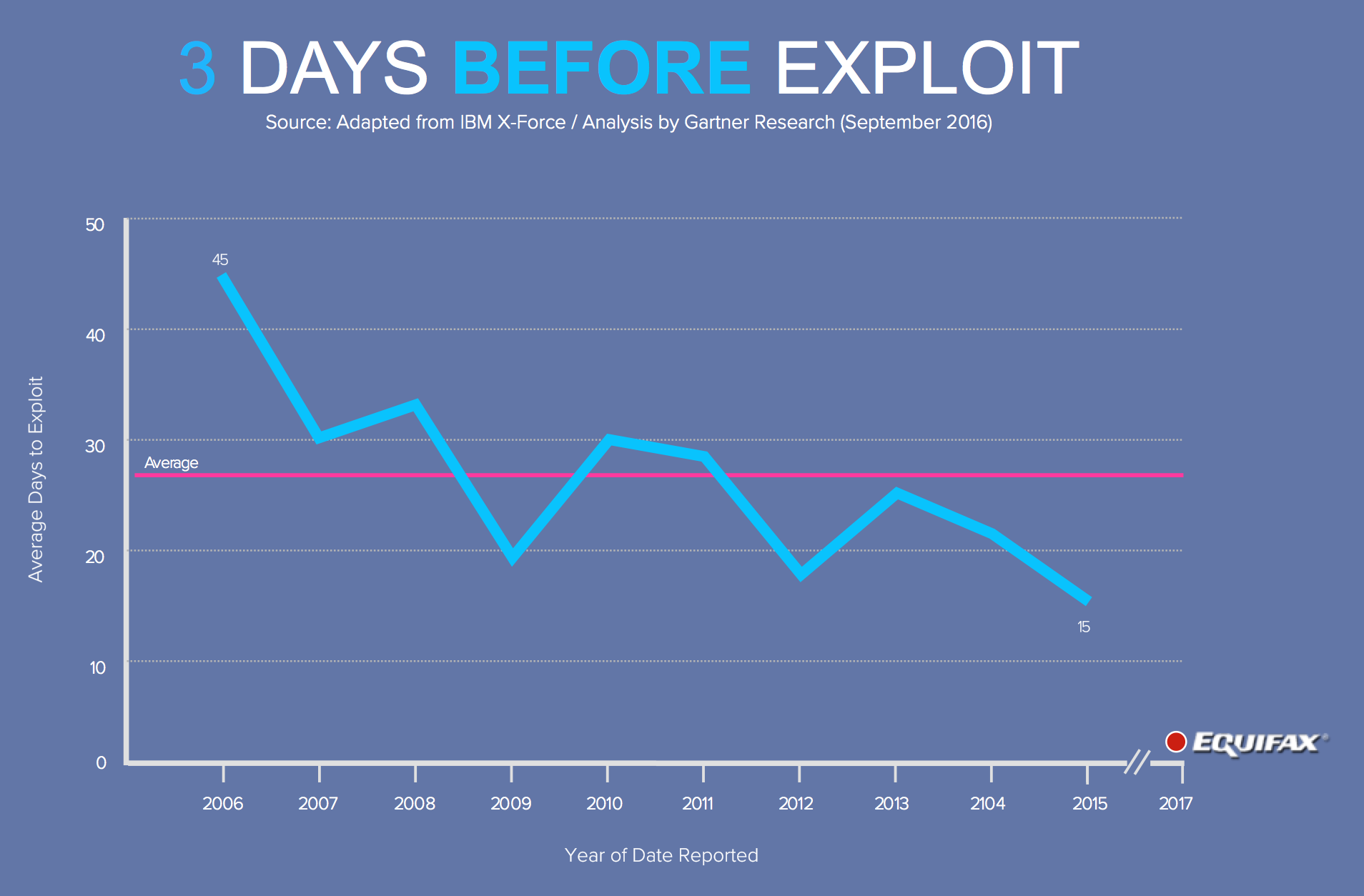 I recall from my earlier days working under the assumption we had ~30 days before vulnerabilities with CVSS scores of 9 or 10 were turned into exploits. In 2015 that number was down to 15 days and then, in 2017, the exploit was out in 3 days! Initially, I was skeptical, an assumed this was a one-off and couldn't be the new norm until I saw this article.

It would appear that the attackers are accelerating too, shortening delivery times and increasing productivity just like everyone else.

At this years RSA conference, David Hogue, technical director at the NSA shared their best practices to prevent these zero-day attacks. David said, keeping their systems as updated as possible, as quickly as possible is one of the best defense practices.

If the appeal of productivity is attractive enough to run towards DevSecOps, then perhaps the fear of being breached is something you'll want to run away from. You can choose the carrot or the stick but either way, you'll want to change if haven't begun already.

I'll leave you with a Deming quote: "It is not necessary to change. Survival is not mandatory."