I've been presenting DFIR Redefined: Deeper Functionality for Investigators with R across the country at various conference venues and thought it would help to provide details for readers.

Incident responders and investigators need all the help they can get.

Let me lay just a few statistics on you, from Secure360.org's The Challenges of Incident Response, Nov 2016. Per their respondents in a survey of security professionals:

In short, according to Nathan Burke, “It’s just not mathematically possible for companies to hire a large enough staff to investigate tens of thousands of alerts per month, nor would it make sense.”

The 2017 SANS Incident Response Survey, compiled by Matt Bromiley in June, reminds us that “2016 brought unprecedented events that impacted the cyber security industry, including a myriad of events that raised issues with multiple nation-state attackers, a tumultuous election, and numerous government investigations.” Further, "seemingly continuous leaks and data dumps brought new concerns about malware, privacy and government overreach to the surface.”

Finally, the survey shows that IR teams are:

To that end, what concepts and methods further enable handlers and investigators as they continue to strive for faster detection and containment? Data science and visualization sure can’t hurt. How can we be more creative to achieve “deeper functionality”? I propose a two-part series on Deeper Functionality for Investigators with R with the following DFIR Redefined scenarios:

R is “100% focused and built for statistical data analysis and visualization” and “makes it remarkably simple to run extensive statistical analysis on your data and then generate informative and appealing visualizations with just a few lines of code.”

With R you can interface with data via file ingestion, database connection, APIs and benefit from a wide range of packages and strong community investment.

From the Win-Vector Blog, per John Mount “not all R users consider themselves to be expert programmers (many are happy calling themselves analysts). R is often used in collaborative projects where there are varying levels of programming expertise.”

I propose that this represents the vast majority of us, we're not expert programmers, data scientists, or statisticians. More likely, we're security analysts re-using code for our own purposes, be it red team or blue team. With very few lines of R, investigators might be more quickly able to reach conclusions.

All the code described in the post can be found on my GitHub.

Have You Been Pwned?

This scenario I covered in an earlier post, I'll refer you to Toolsmith Release Advisory: Steph Locke's HIBPwned R package.

Windows Events by Event ID present excellent sequenced visualization opportunities. A hypothetical scenario for this visualization might include multiple failed logon attempts (4625) followed by a successful logon (4624), then various malicious sequences. A fantastic reference paper built on these principles is Intrusion Detection Using Indicators of Compromise Based on Best Practices and Windows Event Logs.

An additional opportunity for such sequence visualization includes Windows processes by parent/children. One R library particularly well suited to is TraMineR: Trajectory Miner for R. This package is for mining, describing and visualizing sequences of states or events, and more generally discrete sequence data. It's primary aim is the analysis of biographical longitudinal data in the social sciences, such as data describing careers or family trajectories, and a BUNCH of other categorical sequence data. Somehow though, the project page somehow fails to mention malicious Windows Event ID sequences. Consider Figures 1 and 2 as retrieved from the above-mentioned paper. 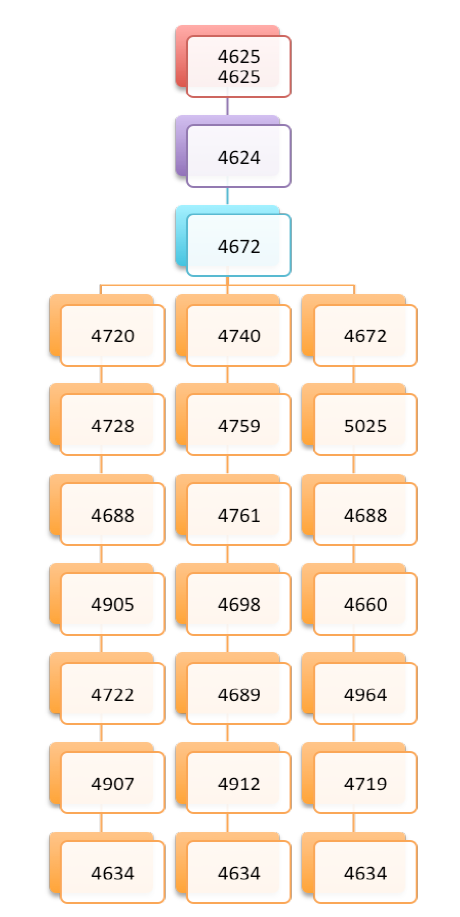 Taking related log data, parsing, and counting it for visualization with R would look something like Figure 3. 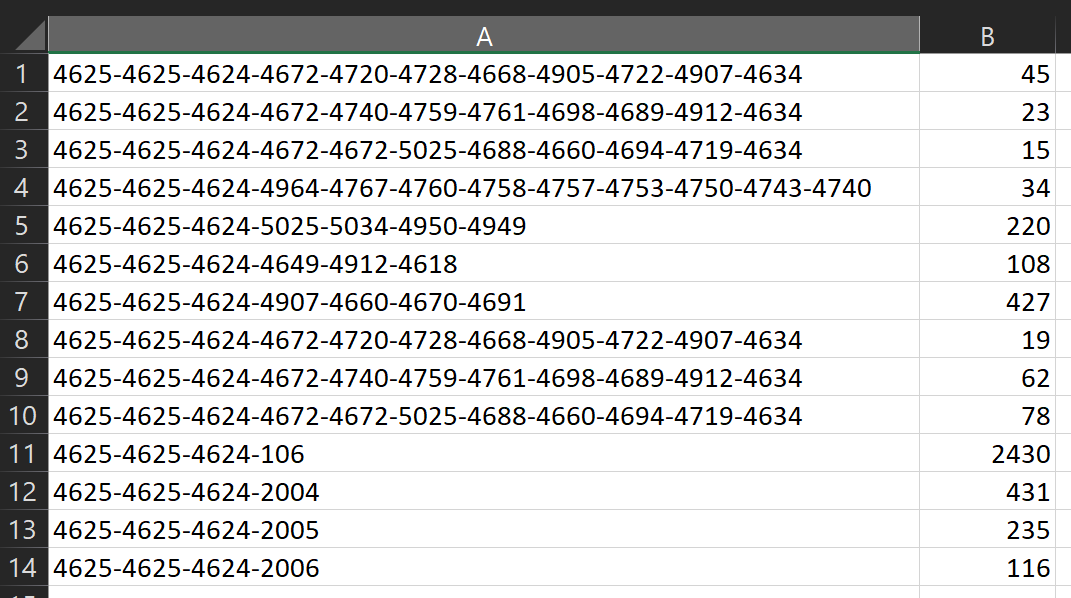 How much R code does it take to visualize this data with a beautiful, interactive sunburst visualization? Three lines, not counting white space and comments, as seen in the video below.

A screen capture of the resulting sunburst also follows as per Figure 4. 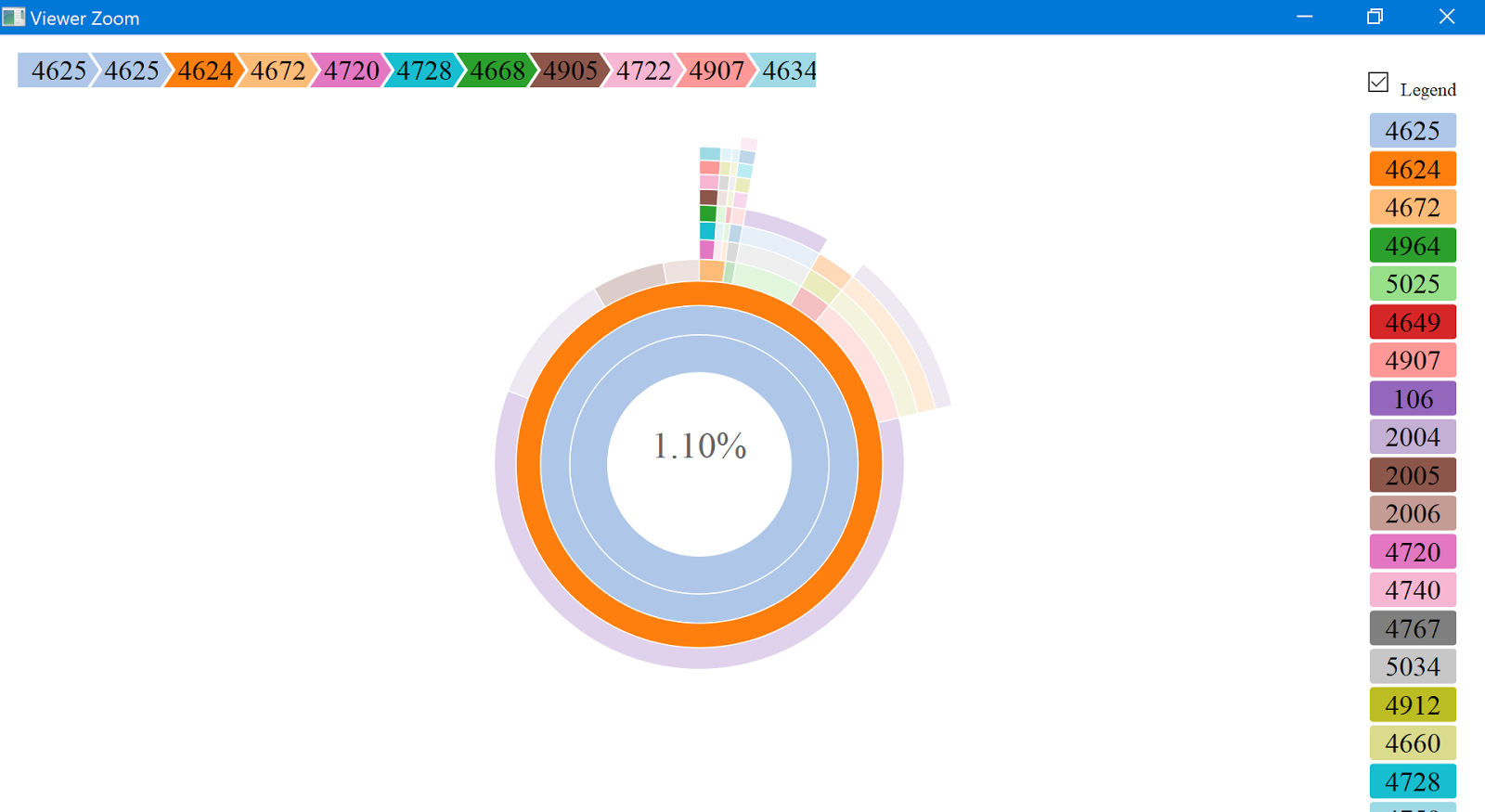 How do your potential attackers feel, or can you identify an attacker via sentiment analysis?

Here's the scenario: DDoS attacks from hacktivist or chaos groups.

Attacker groups often use associated hashtags and handles and the minions that want to be "part of" often retweet and use the hashtag(s). Individual attackers either freely give themselves away, or often become easily identifiable or associated, via Twitter. As such, here's a walk-through of analysis techniques that may help identify or better understand the motives of certain adversaries and adversary groups. I don't use actual adversary handles here, for obvious reasons. I instead used a DDoS news cycle and journalist/bloggers handles as exemplars. For this example I followed the trail of the WireX botnet, comprised mainly of Android mobile devices utilized to launch a high-impact DDoS extortion campaign against multiple organizations in the travel and hospitality sector in August 2017. I started with three related hashtags:

We start with all related Tweets by day and time of day. The code is succinct and efficient, as noted in Figure 5.

The result is a pair of graphs color-coded by tweets and retweets per Figure 6. 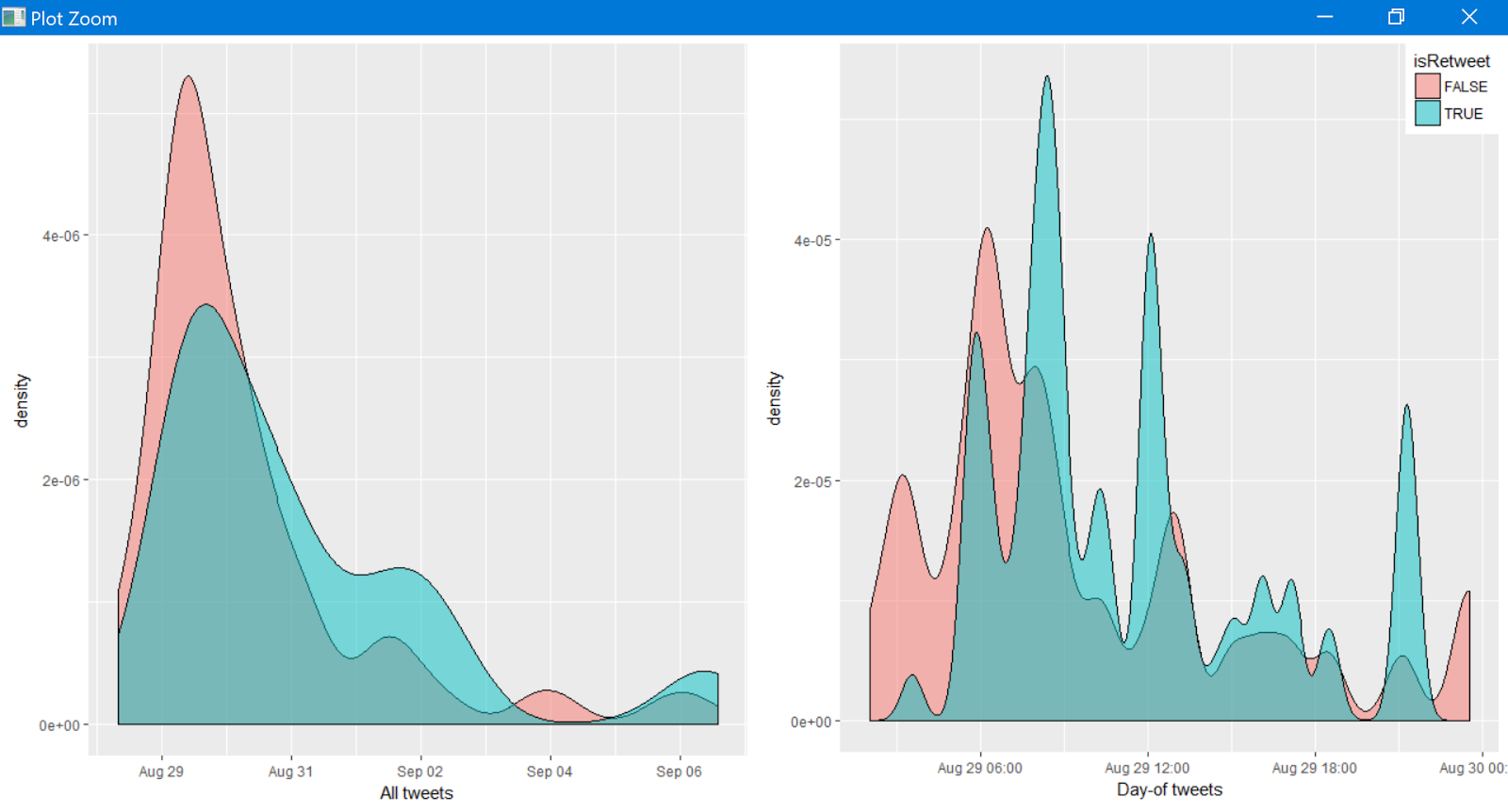 This gives you an immediate feels for spikes in interest by day as well as time of day, particularly with attention to retweets.

Want to see what platforms potential adversaries might be tweeting from? No problem, code in Figure 7.

The result in the scenario ironically indicates that the majority of related tweets using our hashtags of interest are coming from Androids per Figure 8. 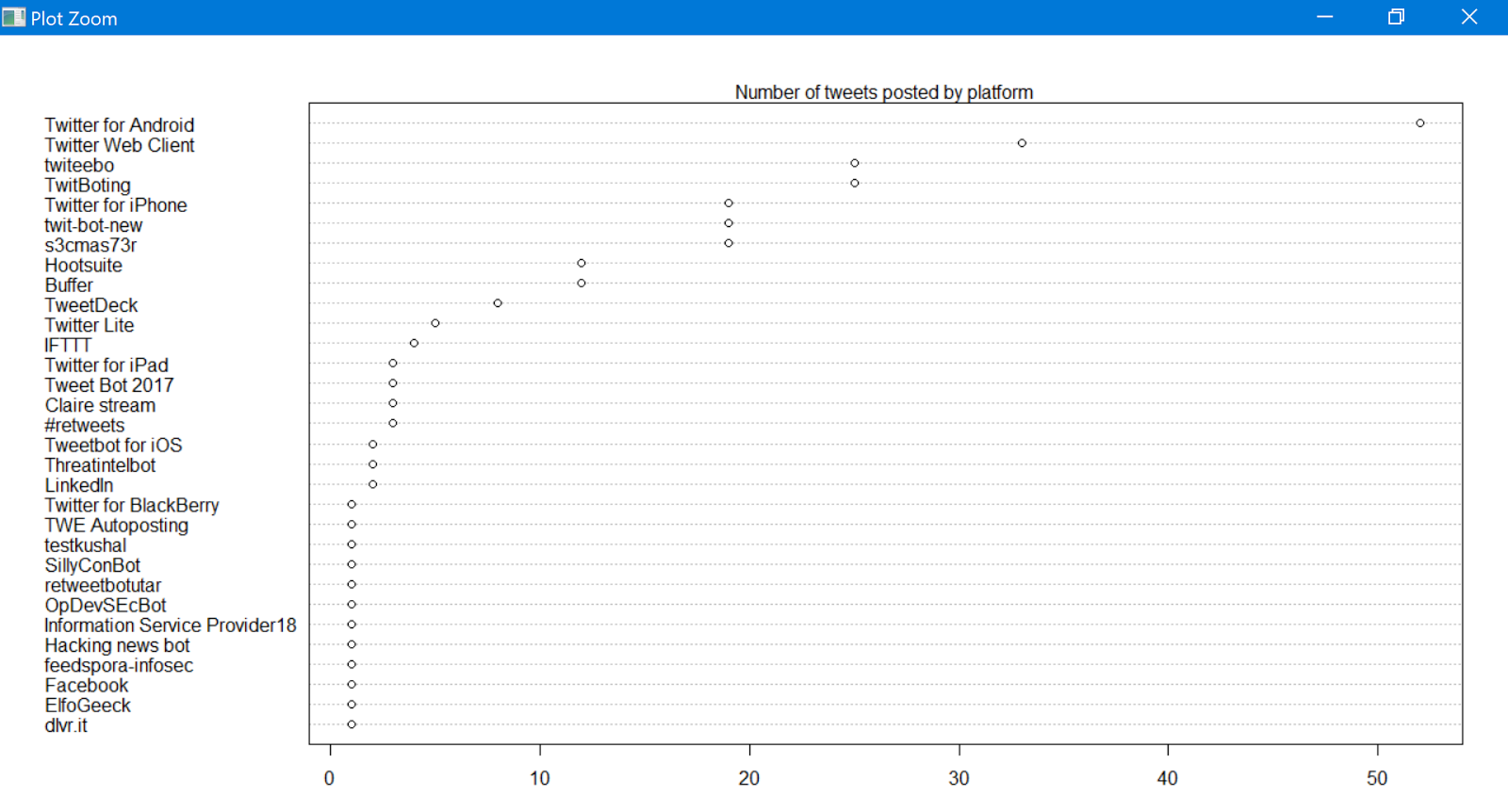 Now to the analysis of emotional valence, or the "the intrinsic attractiveness (positive valence) or averseness (negative valence) of an event, object, or situation."

orig$text[which.max(orig$emotionalValence)] tells us that the most positive tweet is "A bunch of Internet tech companies had to work together to clean up #WireX #Android #DDoS #botnet."

orig$text[which.min(orig$emotionalValence)] tells us that "Dangerous #WireX #Android #DDoS #Botnet Killed by #SecurityGiants" is the most negative tweet.

...and we have Figure 9, which tells us that most tweets about WireX were emotionally neutral on 29 AUG 2017, around 0800 we saw one positive tweet, and more negative tweets overall in the morning. 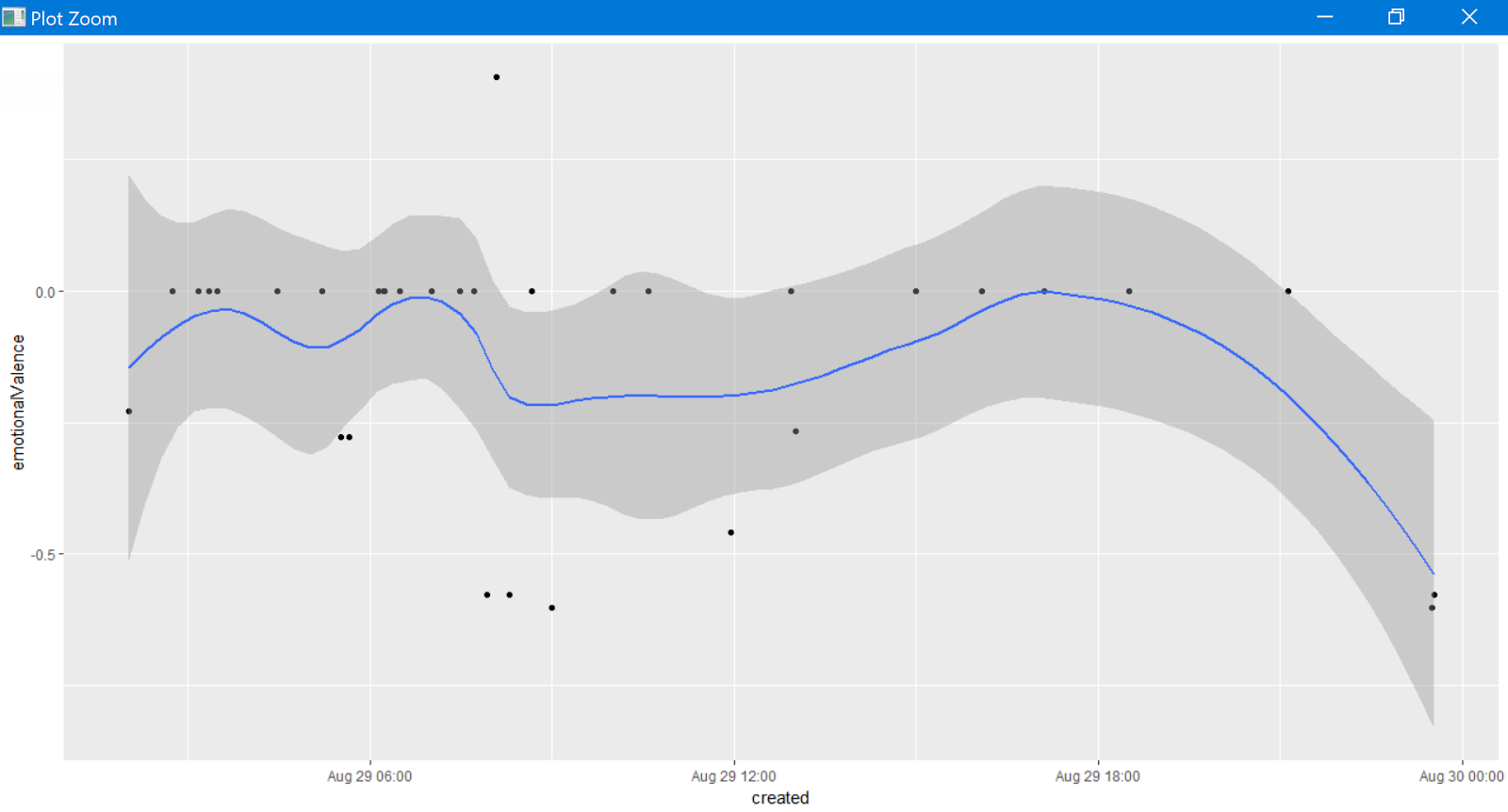 Another line of questioning to consider: Which tweets are more often retweeted, positive or negative? As you can imagine with information security-focused topics, negativity wins the day.


...and we learn just how popular negative tweets are in Figure 10. 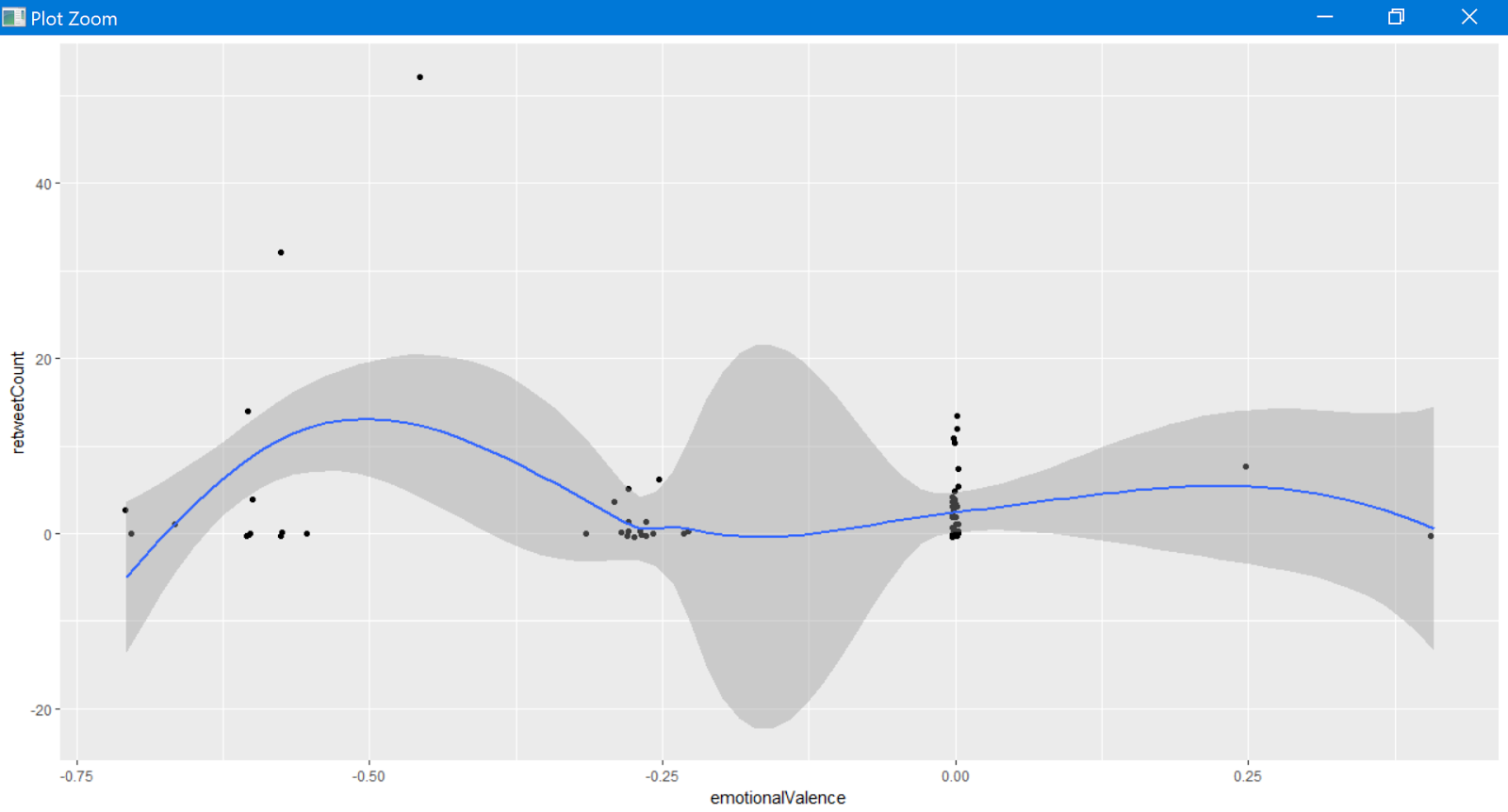 There are clusters of emotionally neutral retweets, two positive retweets, and a load of negative retweets. This type of analysis can quickly lead to a good feel for the overall sentiment of an attacker collective, particularly one with less OpSec and more desire for attention via social media.

In Part 2 of DFIR Redefined: Deeper Functionality for Investigators with, R we'll explore this scenario further via sentiment analysis and Twitter data, as well as Fast Frugal Trees (decision trees) for prioritizing criticality.

Cheers... until next time.