Time Consumption and Cost to the Company

In a project where the content is large and the testing phase runs for quite a long time, automation testing is the perfect choice.

However, in small projects where the testing phase runs for only a few weeks, manual testing is more preferable. 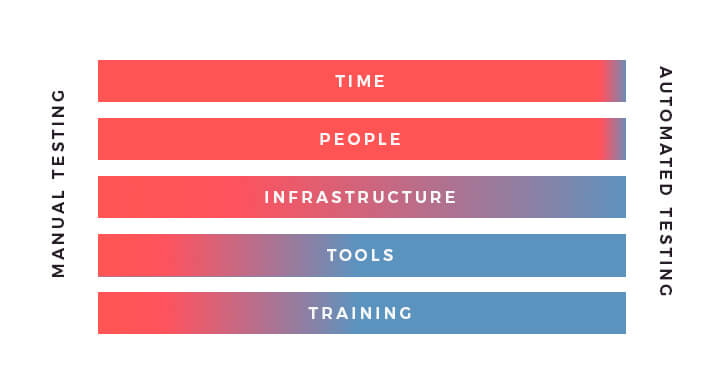 The use of automated testing to test responsiveness in the user interface of an application is widely appreciated. However, it is not supposed to be an aid, but a boost to your UI testing capabilities. Automated testing tools in UI work by checking the position of an element, alignment, and distance between elements and the container. A very small error in the testing script will result in one such alignment being misinterpreted.

During user acceptance testing, the instinct of a manual tester is very important. An experienced tester can observe an object or element that looks misaligned or does not matches the requirement.

For a testing phase where the duration is long, there are high chances of an undetected error when testing is performed manually. Every time a small defect is fixed, the entire application needs to be tested to ensure that any other breakage is not occurring. The process is tiring and monotonous and testers often tend to miss small but critical defects while performing repeated testing.

Automation testing involves the execution of scripts that perform repeated testing of the application over and over again. Since a machine does not deviate, if the script is properly written, there is no chance of missing a defect when the test is executed over and over again.

Regression testing is a phase that involves constant code changes and testing how the application is responding to frequent changes. When regression testing is performed manually, there are high chances of error since the human eye often misses small changes while observing the same thing repeatedly. For a large application, it takes a number of testers to perform these repetitive tasks.

When automation testing is used, regression testing tools speed up the process by the repeated execution of test cases. Multiple test case scenarios can also be simultaneously executed, and it saves time with parallel execution along with other test cases.

Nature of the Application

For a banking application, for example, a number of scenarios require testing.

For these kinds of scenarios, testing is completed much faster when a well-written script is executed. Since most of the testing involves repetitive operations of the same scenario, but with different entities, manual testing is better.

For a small web application like a personal blog page or the page of a small business like a restaurant, the look and feel of the application along with user experience are important. In this scenario, testing should be done based on human instinct. Testers should think from the perspective of an end user and test the application to find bugs or defects that may hamper the user experience. Since no automated testing tools are not yet discovered that can replace human instinct, manual testing is more preferable for this scenario.

Automation programs can swiftly execute multiple test cases. Organizations are depending more on automated testing and manual testing is often framed as waste of manpower and time. However, as it is the base of testing and for writing automated testing scripts, an experience manual tester is still often a requirement. Scenarios may often arise in a project when human evaluation becomes the only path to maintain the quality of a product.