Join For Free
In my last blog I defined Tell Don’t Ask (TDA) using a simple shopping cart example. In it the shopping cart was responsible for working out the total cost of the items in the cart as opposed to the client asking for a list of items and then calculating the total cost itself. The TDA example is shown below:


I have to ask though, does TDA it all come down to a matter language and semantics. Consider the example above, is the client telling or asking? Although this code is much better than my ask don't tell example, I think that a case can be made for saying that the client is asking for the total price. Consider the following issues:


If you agree that return values reflect the internal state of an object, whether direct or inferred then, as Mr Spock would say, logic dictates that you’d have to conclude that all method signatures would have a void return value, never throw exceptions and handle all errors themselves and look something like this:


And this is where some of the logic can start to unravel. Doesn’t a ShoppingCart contacting the Visa or Mastercard payment system break the single responsibility principle (SRP)? The WareHouse also needs to be informed that the order can be shipped. Is that the responsibility of the ShoppingCart? And what if we wanted to print an itemised bill in PDF format? You can tell the ShoppingCart to print itself, but are we breaking the SRP by adding printing code to the ShoppingCart however small it may be? Perhaps this requires further thought, so take a look at the Communication Diagram below:

Now, take a look at the next scenario. Here the user is confirming the order and then sitting down to eagerly await its delivery.

Now this works as a design if you accept that a ShoppingCart is responsible for maintaining a list of items the user wants and paying for those items. You’ve also got to accept that the Visa card is responsible for shipping them to the customer: all of which doesn’t make sense to me as it breaks the SRP and, in my opinion, the SRP is one of the fundamental features of good software design. Besides, when I’m doing my shopping in the supermarket I don’t ask my shopping cart to pay the bill, I have to get my wallet out. If you take that analogy further, then you’ll conclude that it’s some other object's responsibility to marshall the flow of the transaction; the OrderController’s perhaps? 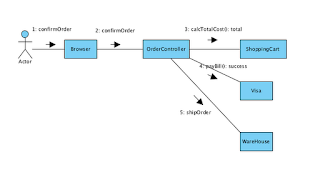 Now don’t get me wrong, I like the idea of tell don’t ask it makes perfect sense, but it’s not perfect and it can stumble. If you search the Internet for examples you often find that they’re linear in nature, reflecting the first two diagrams above where A calls B, B calls C and C calls D etc. This doesn’t reflect most applications as at some point in your programs execution you’re forced to ask an object for data, and to make a decision based upon that data. The second reason tell don’t ask stumbles is that it’s so easy to fall into the trap of asking an object for data without even thinking about it. For example, take a look at the snippet below: