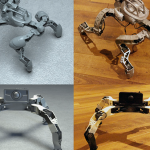 The idea of providing a platform for users to build their own creations was popularized by Lego with their Mindstorm platform. Wired went as far as to suggest it actually saved the company from oblivion.

Disney have teamed up with Carnegie Mellon to offer a similar platform for people to create their own 3D robots.

The platform, documented in a recently published paper, allows users to create their own robot, complete with unique shape, size and even number of legs.

They do this via an intuitive editing tool that offers them a range of design options.  The system is built so that whatever designs are offered follow physical laws.

“Progress in rapid manufacturing technology is making it easier and easier to build customized robots, but designing a functioning robot remains a difficult challenge that requires an experienced engineer,” Disney say.“Our new design system can bridge this gap and should be of great interest to technology enthusiasts and the maker community at large.”

The aim of the project is to make the creation of robotic creatures as easy and intuitive as possible.  The tool offers users live feedback on how their creation would behave in the real world, therefore hopefully educating them on what it takes to design a useful and effective robot.

Users begin by loading up a simple, skeletal description of the robot, which the tool then uses to create an initial geometry for the robot.  It then places a motor at each joint, after which the user can begin tinkering with the structure of the robot, including adding or removing motors.

It’s hoped that the system will do most of the non-intuitive or tedious work involved in planning and designing a robot, whilst still leaving the user with plenty they can do to customize their creation.

There is a robust method underpinning the software to ensure stable walking motions for the robots are created, regardless of the number of legs the creation is given.  It is all performed in a matter of seconds, thus hopefully making the process very user friendly.

Once users are happy with their design, the system will produce a 3D geometry for all of the body parts, whether they be connectors, motors or any other element of the robot.  These can then be sent over to a 3D printer for fabrication.

To put the system through its paces, the researchers developed a pair of four legged robots using the system that were then constructed to see whether they moved as the system predicted they would.

“It took us minutes to design these creatures, but hours to assemble them and days to produce parts on 3-D printers,” they say. “The fact is that it is both expensive and time-consuming to build a prototype — which underscores the importance of a design system such as ours, which produces a final design without the need for building multiple physical iterations.”

It’s probably fair to say that the functionality of these robots is too limited to make this a commercial proposition, but it could be valuable in teaching people about the mechanics involved in building a functioning robot.