All this month, I'm taking some time each day to explore (and document) things that are related to UWP development that I haven't fully investigated or used before. While doing it over lunch each day I'm calling it #UWPLunch.

Displaying GIFs in XAML apps has been notoriously tricky in the past. A mix of licensing issues and a lack of native support meant that complicated workarounds were often needed. The most common solution involved the use of an embedded web browser control but it was a far from ideal solution.

With the anniversary update, that's changed. GIFs and even animated GIFs are now supported.

Simply drop this in a blank app.

And get something that looks like this (minus the animation) 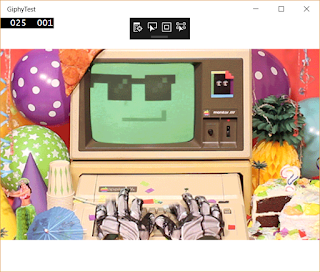 Going a bit further I wanted something that would show a few more animated GIFs at once so I created an app that's pointed at the giphy trending API.

and then displaying it on the view:

And voila, a lovely app showing lots of animated gifs:

Apps requiring the display of gifs are no longer an issue.