So now I've covered the ring buffer itself, reading from it and writing to it.

Logically the next thing to do is to wire everything up together.

I talked about multiple producers - they have the producer barrier to keep them in order and under control.  I've talked about consumers in a simple situation.  Multiple consumers can get a little more involved.  We've done some clever stuff to allow the consumers to be dependent on each other and the ring buffer.  Like a lot of applications, we have a pipeline of things that need to happen before we can actually get on with the business logic - for example, we need to make sure the messages have been journalled to disk before we can do anything.

The Disruptor paper and the performance tests cover some basic configurations that you might want. I'm going to go over the most interesting one, mostly because I needed the practice with the graphics tablet.

Diamond configuration
DiamondPath1P3CPerfTest illustrates a configuration which is not too uncommon - a single producer with three consumers.  The tricky point being that the third consumer is dependent upon the previous two consumers to finish before it can do anything. 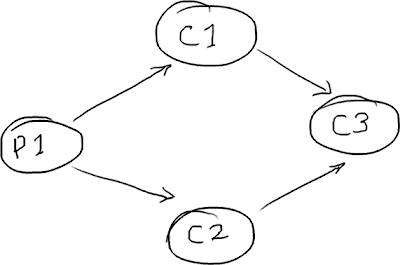 Consumer three might be your business logic, consumer one could be backing up the data received, and consumer two may be preparing the data or something.

Diamond configuration using queues
In a SEDA-style architecture, each stage will be separated by a queue: 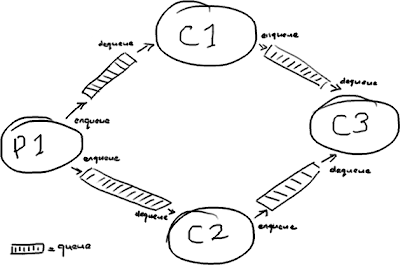 (Why does queue have to have so many "e"s?  It's the letter I have the most trouble with in these drawings).

You might get an inkling of the problem here: for a message to get from P1 to C3 it has to travel through four whole queues, each queue taking its cost in terms of putting the message on the queue and taking it off again. 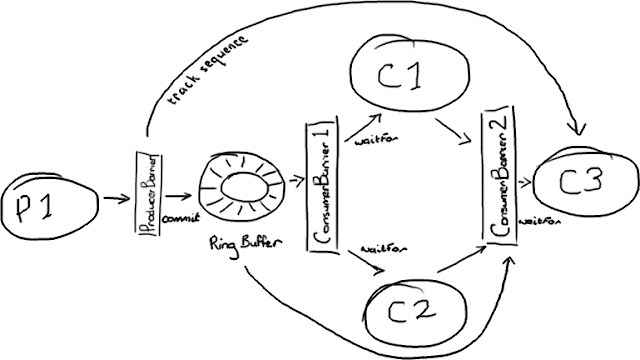 It does look more complicated.  But the ring buffer remains the single point of contact between all the players, and the interactions are all based on the barriers checking the sequence numbers of the things it's dependent upon.

How consumer dependencies work in the Disruptor
Hmm.  I can see I'm going to need an example.

The producer can't write anything more to the ring buffer because sequence 15 is taking up the slot where we'd want to put sequence 23.

(I'm sorry, I really did try to find an alternative to red and green, but everything else was just as ambiguous).

Modifying entries
The secret is to write them to the ring buffer Entry itself.  This way, when consumer three grabs the entry off the ring buffer, it will have been populated with all the information consumer three needs to do the job.  The really important part of this is that for each field on the Entry only one consumer is allowed to write to it.  This prevents any write-contention which will slow the whole thing down. 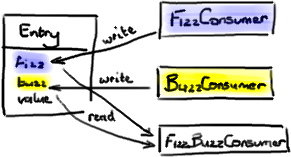 Some actual Java code
All this looks more complicated than the queue implementation.  And yes, it does involve a bit more coordination.  But this is hidden from the consumers and producers, they just talk to the barriers.  The trick is in the configuration.  The diamond graph in the example above would be created using something like the following:

In summary
So there you have it - how to wire up the Disruptor with multiple consumers that are dependent on each other.  The key points:
EDIT: Adrian has written a nice DSL to make wiring up the Disruptor much easier.