A distributed lock service should satisfy the following properties:

Many libraries use Redis for distributed locking, but some of these good libraries haven't considered all of the pitfalls that may arise in a distributed environment.

In the following section, I show how to implement a distributed lock step by step based on Redis, and at every step, I try to solve a problem that may happen in a distributed system. Please note that I used a leased-based lock, which means we set a key in Redis with an expiration time (leased-time); after that, the key will automatically be removed, and the lock will be free, provided that the client doesn't refresh the lock. Complete source code is available on the GitHub repository: https://github.com/siahsang/red-utils

For simplicity, assume we have two clients and only one Redis instance. A plain implementation would be:

But what is wrong with that?

Suppose the first client requests to get a lock, but the server response is longer than the lease time; as a result, the client uses the expired key, and at the same time, another client could get the same key, now both of them have the same key simultaneously! It violet the mutual exclusion. The following diagram illustrates this situation: 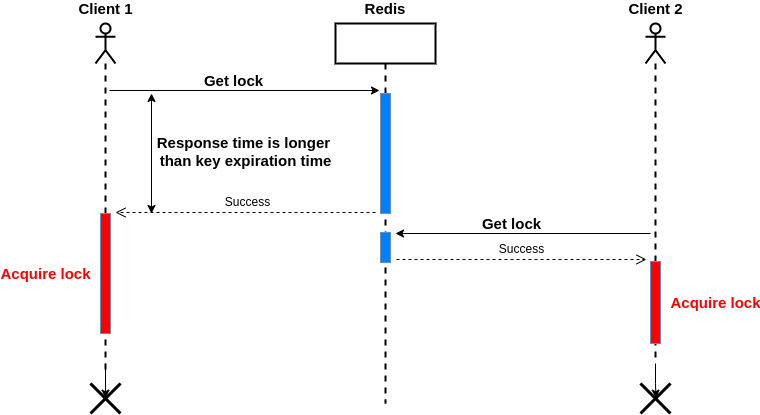 To solve this problem, we can set a timeout for Redis clients, and it should be less than the lease time. But there is another problem, what would happen if Redis restarted (due to a crash or power outage) before it can persist data on the disk? We consider it in the next section.

As you know, Redis persist in-memory data on disk in two ways:

By default, only RDB is enabled with the following configuration (for more information please check https://download.redis.io/redis-stable/redis.conf):

For example, the first line means if we have one write operation in 900 seconds (15 minutes), then It should be saved on the disk.

So in the worst case, it takes 15 minutes to save a key change. If Redis restarted (crashed, powered down, I mean without a graceful shutdown) at this duration, we lose data in memory so other clients can get the same lock: 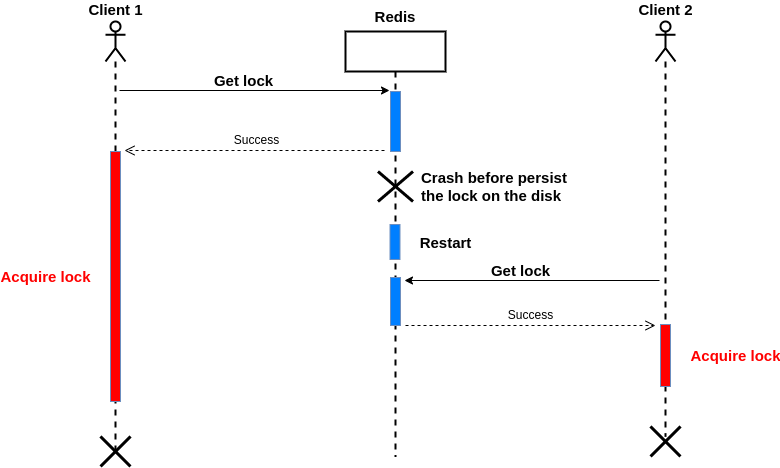 To solve this issue, we must enable AOF with the fsync=always option before setting the key in Redis. Note that enabling this option has some performance impact on Redis, but we need this option for strong consistency.

In the next section, I will show how we can extend this solution when having a master-replica.

In this configuration, we have one or more instances (usually referred to as the slaves or replica) that are an exact copy of the master.

By default, replication in Redis works asynchronously; this means the master does not wait for the commands to be processed by replicas and replies to the client before. The problem is before the replication occurs, the master may be failed, and failover happens; after that, if another client requests to get the lock, it will succeed! Or suppose there is a temporary network problem, so one of the replicas does not receive the command, the network becomes stable, and failover happens shortly; the node that didn't receive the command becomes the master. Eventually, the key will be removed from all instances! The following picture illustrates this situation:

As a solution, there is a WAIT command that waits for specified numbers of acknowledgments from replicas and returns the number of replicas that acknowledged the write commands sent before the WAIT command, both in the case where the specified number of replicas is reached or when the timeout is reached. For example, if we have two replicas, the following command waits at most 1 second (1000 milliseconds) to get acknowledgment from two replicas and return:

So far, so good, but there is another problem; replicas may lose writing (because of a faulty environment). For example, a replica failed before the save operation was completed, and at the same time master failed, and the failover operation chose the restarted replica as the new master. After synching with the new master, all replicas and the new master do not have the key that was in the old master!

To make all slaves and the master fully consistent, we should enable AOF with fsync=always for all Redis instances before getting the lock.

Note: Again in this approach, we are scarifying availability for the sake of strong consistency.

In the last section of this article I want to show how clients can extend the lock, I mean a client gets the lock as long as it wants.

In this scenario, a lock that is acquired can be held as long as the client is alive and the connection is OK. We need a mechanism to refresh the lock before the lease expiration. We also should consider the case where we cannot refresh the lock; in this situation, we must immediately exit (perhaps with an exception).

Besides, other clients should be able to wait for getting the lock and entering the critical section as soon the holder of the lock released the lock: 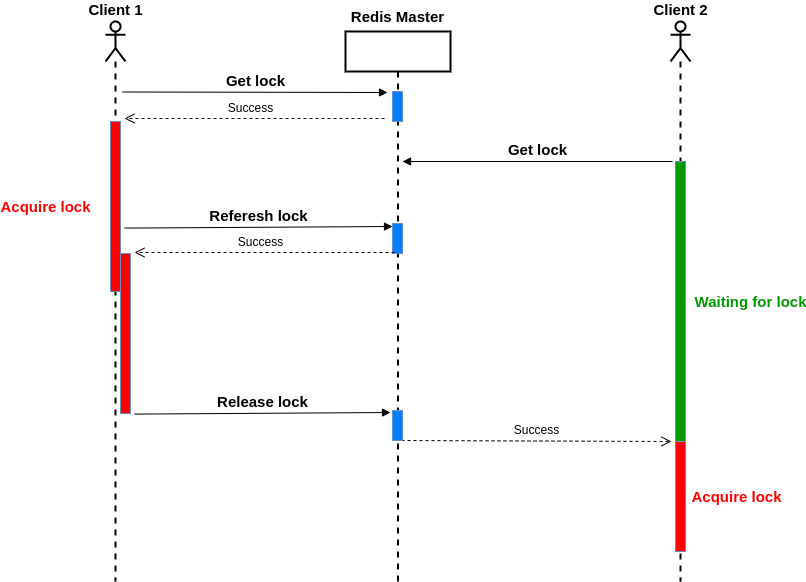 Here is the pseudocode; for implementation, please refer to the GitHub repository:

We have implemented a distributed lock step by step, and after every step, we solve a new issue. But some important issues that are not solved and I want to point here; please refer to the resource section for exploring more about these topics:

Many libraries use Redis for providing distributed lock service. It is worth being aware of how they are working and the issues that may happen, and we should decide about the trade-off between their correctness and performance.