In this post, we'll take a look at a practical, simple way to engineer a powerful, distributed performance testing suite, using tools commonly used in the J2EE community

I think that it's commonly accepted at this point that performance testing in software is a useful way of giving us confidence in the robustness and responsiveness of our system under load. The arguments covering these ideas are well covered by better domain experts than myself, so this article will focus on the practicalities of integrating performance testing with your CI environment.

This article assumes familiarity with the following tools

It's out of scope for this article to introduce, in detail, these tools, but there are a number of online articles that are better suited to providing a better grounding should you be interested.

A well designed performance testing system should satisfy some of the following high level properties.

Luckily, the tools to satisfy these goals already exist, its just a case of putting them together.

Tips and tricks for your JMeter tests

Ok, lets dive right in. I'm going to try and make this very example centric so you can see whats going on hopefully in the context of your own jmeter tests. 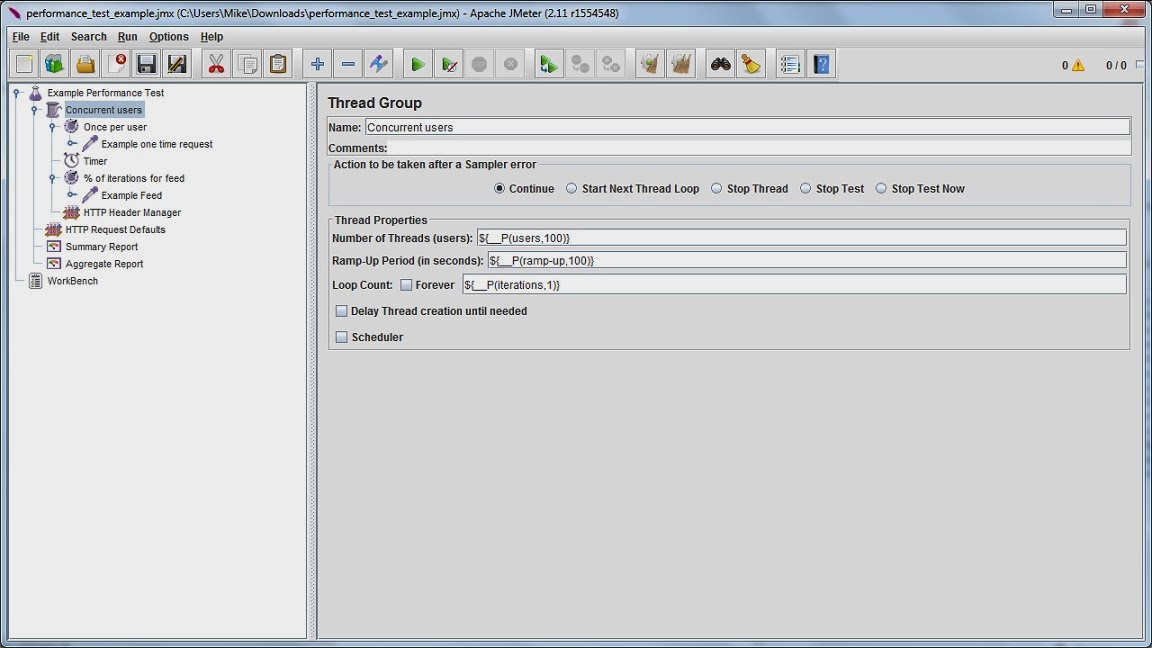 The thread group is one of the simplest and most powerful ways of simulating a user in your system. Requirements from the business are often expressed in these terms over the classic request per second metric. Thus, it can be a pragmatic approach to model the test in these terms.

Looking at the entries for the Thread Properties gives us a first look at JMeters often overlooked variable dsl, documented here. Lets take the first field as an example :

${__P(users,100)}
So what this statement is trying to do is resolve the value for the users property. If it can't it will use the provided default (100).

Pitfall 1 : Theres some weird truncation logic in play here through the ui ( which i'm assuming 90% of people will be using to edit these fields ), so make sure you check your field names. 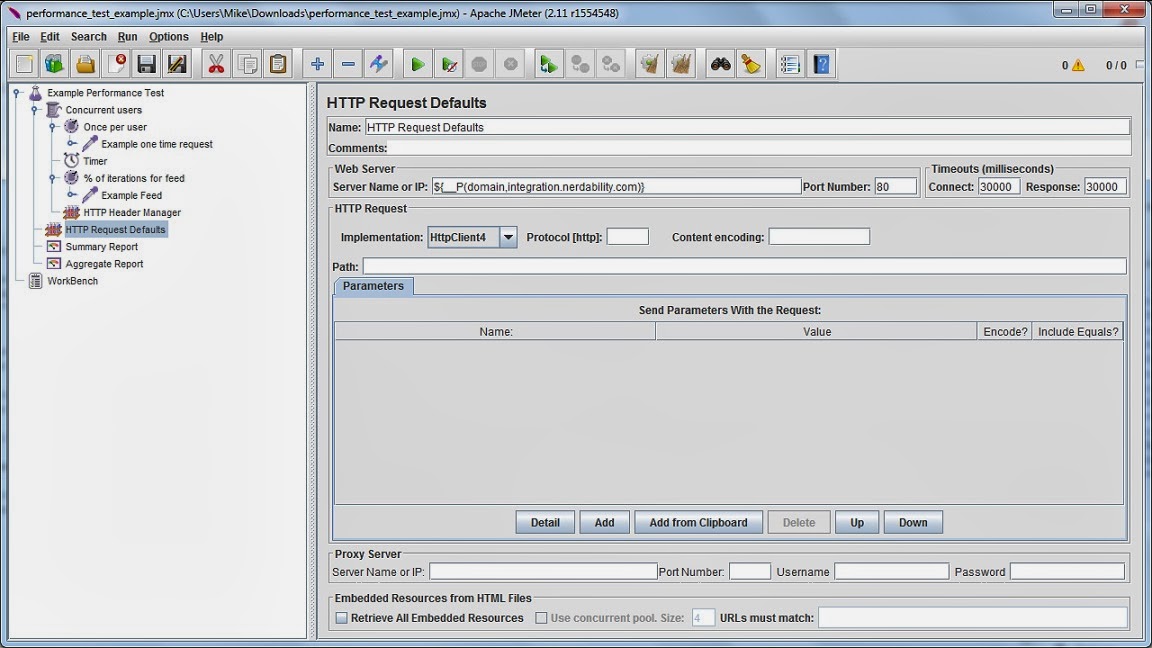 Now we have some tests we need to start thinking about how to run them outside the JMeter GUI. Thankfully, a decent maven plugin exists provided by Lazerycode.
So lets assume that you've created a simple maven project in which to put your jmeter test files, properties file and plugin configuration. Lets review what you should probably have in there.

The JMeter plugin, by default, looks in src/test/jmeter for test plans. If you need to change this you can consult the configuration documentation, but seems like a perfectly sensible place to put test plans.

I've provided some elaboration on the configuration options below:

Next, we need to specify a couple of additional properties. Another quick look at the documentation will tell you that the plugin also checks the src/test/jmeter dir for a set of properties files. We want to, at this point, create a jmeter.properties file and populate it with the following values :

Obviously using your own remote nodes for in place of the defaults i've specified here.

Thats it. Your plugin is now configured to orchestrate execution of your test plans. Onto reporting.

Now go ahead and install the Jenkins performance plugin, which will be responsible for producing pretty graphs from our test reports. After installing, set up a job which runs mvn verify on your project ( this will run the performance tests ). Next add the post build action Publish Performance test result report. It should look like this :

Finally, remember all those variables we added in the tests earlier? Now we want to add those as parameters to the job so we can configure them when we run the job.

These will be provided to the build under the env namespace.
That's pretty much it, tweak and improve the performance tests and configuration as you see fit. The framework should support whatever you need to do.
Testing Apache Maven Jenkins (software) Continuous Integration/Deployment Property (programming) Requests Test plan Network congestion