Liquibase is an open source and extensible change management project that supports a variety of databases including Snowflake, MySQL, and PostgreSQL via JDBC. Liquibase allows users to easily define changes in SQL, XML, JSON, and YAML. These changes are then managed in a version control system so the changes can be documented, ordered, and standardized. For more information on the features and benefits of Liquibase, check out their documentation site.

In this blog post we’ll show you how to:

New to distributed SQL or YugabyteDB? Read on.

Distributed SQL databases are becoming popular with organizations interested in moving data infrastructure to the cloud or cloud native environments. This is often motivated by the desire to reduce TCO or move away from the horizontal scaling limitations of monolithic RDBMS like Oracle, PostgreSQL, MySQL, and SQL Server. The basic characteristics of Distributed SQL are:

In this section we are going to install YugabyteDB on the cluster. The complete steps are documented here. We’ll assume you already have a GKE cluster up and running as a starting point.

The first thing to do is to add the charts repository.

Create a namespace. In this case we’ll call it yb-demo.

We are now ready to install YugabyteDB. In the command below we’ll be specifying values for a resource constrained environment.

To check the status of the cluster, execute the below command:

Note the external-IP for yb-tserver-service which we are going to use to establish a connection between YugabyteDB and Liquibase. From the screenshot above we can see that the IP is 34.72.XX.XX and the YSQL port is 5433.

The next step is to download a sample schema and data. You can find a variety of sample databases that are compatible with YugabyteDB in our Docs. For the purposes of this tutorial we are going to use the Northwind sample database. The Northwind database contains the sales data for a fictitious company called “Northwind Traders,” which imports and exports specialty foods from around the world. The Northwind database is an excellent tutorial schema for a small-business ERP, with customers, orders, inventory, purchasing, suppliers, shipping, employees, and single-entry accounting.

Connect to the yb-tserver-pod by running the following command:

To download the schema and data files, run the following commands:

Note: If the Google Cloud Shell tells you that the wget command does not exist, you can execute:

To connect to the YSQL service exit out of the pod shell and run the following command:

Create a database and connect to it using the following commands:

We can now create the database objects and load them with data using the files we downloaded to yb-tserver-pod using the following commands:

Verify that the tables are created by running the following command:

Verify we have data by issuing a simple SELECT:

By default, a YugabyteDB installation doesn’t have a password setup for the default yugabyte user. Specifying one is done the same way you’d do it in PostgreSQL.

Locate the appropriate version of Liquibase for your platform from their downloads page.

For the purposes of this demo, we’ll be installing Liquibase locally on a Mac.

On my Mac I created a new folder called LiquibaseYugabyteDB.

Visit https://jdbc.postgresql.org/download.html and download the appropriate JDBC driver for your environment. I downloaded JDBC 4.2 (42.2.14) and placed it in the LiquidbaseYugabyteDB folder.

Next, in this same folder I created a file called dbchangelog.xml file. This changelog contains the sequence of changesets, each one of which makes small changes to the structure of the database. Add the following boilerplate to this file to get started.

Now in the same directory, create a file called liquibase.properties and add the following content to it that is reflective of your environment.

Step 4: Create a Changeset and Verify the Results

To create a changeset, return to the dbchangelog.xml file and add the following copy highlighted in bold. In the changeset we are going to create a promotions table in the Northwind database with columns for the name of the promotion and the discounted amount.

The SQL equivalent of the changeset above would be:

Execute the update command locally in the directory you created to send the changeset to the database.

To verify that the promotions table was created we can open up a YSQL shell and insert two records into the table and select the data out.

Along with the promotions table, you should now see two additional tables that Liquibase has created in the Northwind database. 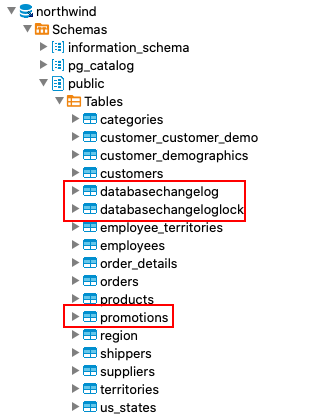 This table is used internally by Liquibase to manage access to the changelog table during deployment. So, nothing to see here!

Let’s create an additional change set. In this case let’s add two more columns to the promotions table. A start_date column and a stop_date column so we know when a promotion starts and ends. Instead of XML, let’s use SQL to initiate the changes. To do this, create a file in your Liquibase project directory called changelog.sql.

Add the following commands to this file:

Issue the following command to send the change to the database.

We should now be able to see a second record in the databasechangelog tracking table.

We should also be able to see the new start_time and stop_date columns in the promotions table.

That’s it! You now have a PostgreSQL-compatible, 3 node YugabyteDB cluster running on GKE whose changes are now being managed and tracked by Liquibase. To learn more about supported third-party PostgreSQL tools that work with YugabyteDB, check out the YugabyteDB Documentation or join our community Slack and hit us up there.