Welcome to this week’s tips and tricks blog where we explore both beginner and advanced YugabyteDB topics for PostgreSQL and Oracle DBAs. First things first, for those of you who might be new to either distributed SQL or YugabyteDB.

Distributed SQL databases are becoming popular with organizations interested in moving data infrastructure to the cloud or cloud native environments. This is often motivated by the desire to reduce TCO or move away from the horizontal scaling limitations of monolithic RDBMS like Oracle, PostgreSQL, MySQL, and SQL Server. The basic characteristics of Distributed SQL are:

What Are the Equivalents to Oracle’s IDENTITY and PostgreSQL’s SERIAL Columns in YugabyteDB?

The release of Oracle 12c introduced a direct equivalent to the auto numbering and identity functionality that was already supported in other databases for many years.

Oracle supports two alternatives in this regard including the ability to create IDENTITY columns and support for sequence pseudocolumns as default values. In a nutshell, we can think of Oracle’s IDENTITY columns as functionally equivalent to MySQL’s AUTO_INCREMENT, SQL Server’s IDENTITY, and PostgreSQL’s SERIAL pseudo-type.

Let’s take a look at a simple example in Oracle.

In the example above we are creating a table in which the first motorcycle manufacturer inserted will be assigned a manufacturer_id of “5” while the next one will be assigned “6” and so on. The START WITH clause in the primary key specification is what tells the database what number to start with.

In YugabyteDB the above example can be accomplished in two ways just as it would be in PostgreSQL. The first possible solution is to use GENERATED BY DEFAULT AS IDENTITY or GENERATED ALWAYS AS IDENTITY in the PRIMARY KEY specification. As shown in the example below.

A second example is to use the SERIAL pseudo-type.

Using the SERIAL example, let’s insert two records which by default will auto increment by 1.

Next, let’s create a sequence that we can reference so the next motorcycle manufacturers that get inserted will be incremented by 1 off an initial value of 50.

Finally, let’s alter the sequence so that the next motorcycle manufacturers that get inserted will be incremented by 5 from the last manufacturer_id value of 51.

What Are the Equivalents to Oracle’s NUMBER and PostgreSQL’s DECIMAL and NUMERIC Data Types in YugabyteDB?

All databases have to deal with large numbers with varying degrees of precision and scale. For review:

In Oracle, the NUMBER datatype stores fixed and floating-point numbers. Oracle supports up to 38 digits of precision and scale that can range between -84 to 127. In YugabyteDB, the functional equivalent to Oracle’s NUMERIC datatype is going to be exactly the same as PostgreSQL’s DECIMAL and NUMERIC datatypes. Both of these datatypes support up to 131,072 digits before the decimal point; up to 16,383 digits after the decimal point.

How Does YugabyteDB Handle Oracle’s TIMESTAMP WITH TIME ZONE Datatype?

In Oracle, the examples below are acceptable values for this datatype::

In YugabyteDB, as in PostgreSQL, these values are stored in the database as UTC and converted to the current session’s time zone when selected. If retaining the original time zone information is necessary, it needs to be stored separately.

To find your current time and time zone execute the following:

In YugabyteDB, to figure out what the -07 UTC offset denotes, use the following: 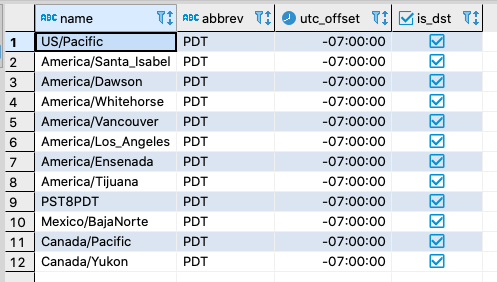 The result set tells us we are in the PDT time zone. To keep things simple, let’s change our session’s time zone to UTC.

Notice that the +00 offset tells us that our time zone has been set to UTC.

In YugabyteDB there are two data types, timestamp and timestampz, that store date and time in a single field.

As an example, run the following query:

What Is the Difference Between YugabyteDB’s Open Source License and PostgreSQL’s?

Both YugabyteDB and PostgreSQL are open source databases with permissive licenses. PostgreSQL is released under the PostgreSQL License, which is similar to the BSD or MIT licenses. YugabyteDB is released under the Apache 2.0 License. A blog worth pursuing if you’d like to understand the subtleties between these open source licenses is “Apache license 2.0, MIT license or BSD license : Who is the fairest of them all?” by Anner Mazur. If you’d like to learn more about what motivated Yugabyte to double down on open source, check out: