The previous posts of this series focused on different frameworks to develop JVM-based applications.

Distributing applications on a couple of computers inside the same company is not an issue. A lot of products are available for automating the pushing of files onto computers. Issues might start to appear when you need to coordinate the deployment across different physical sites.

However, the biggest problem is when computers are not known in advance: in that case, it's not possible to push. For that reason, two decades ago, we saw a move from client-server architectures to web-based architectures.

The remaining question is how to deploy a Java desktop application. In this post, we are going to go through some options to distribute this kind of application.

While not strictly about desktop applications, I believe it's a good idea to mention applets in a post about distributing Java apps.

Applets were the first way to make Java applications available remotely. The idea was to host on a web server both bytecode (a single class or JAR) and reference it in an HTML page.

Note that an applet runs client-side, thus requiring a local JRE. It also mandates a browser plugin. Both are security concerns. That lead browser vendors to remove the support of plugins and in turn the Java team to deprecate applets in Java 9.

With modern browser vendors working to restrict or reduce the support of plugins like Flash, Silverlight, and Java in their products, developers of applications that rely on the Java browser plugin need to consider alternative options. Java developers currently relying on browser plugins should consider migrating from Java Applets to the plugin-free Java Web Start technology.

Supporting Java in browsers is only possible for as long as browser vendors are committed to supporting standards-based plugins. By late 2015, many browser vendors had either removed or announced timelines for the removal of standards-based plugin support, while some are introducing proprietary browser-specific extension APIs. Consequently, Oracle is planning to deprecate the Java browser plugin in JDK 9.

The deprecated plugin technology will be completely removed from the Oracle Java Development Kit (JDK) and Java Runtime Environment (JRE) in a future Java release TBD. Java Web Start applications do not rely on a browser plugin and will not be affected by these changes.

After applets, the next alternative for distributing Java applications is Java Web Start. This is the canonical way for desktop applications. As a personal note, I used it more than 15 years ago with Java 1.4. This page seems to confirm JDK 1.4.2 was the first version to provide it natively, as opposed to as a separate download. Yet, Oracle deprecated Java Web Start in JDK 9 and removed it in JDK 11.

This left JWS users without any option. Karakun is a company that took ownership of the project. It provides it as a separate package under the name Open Web Start and the software is the same.

To distribute an application via Open Web Start, in addition to the JAR itself, you need to provide a JNLP file. This file serves as an external deployment descriptor of a sort. Features of JNLP are quite exhaustive:

The complete specifications are still available on Oracle's site.

Let's create a JNLP to distribute our sample Swing application:

While Open Web Start is not available as part of the JDK anymore, the jpackage tool is. It's included since JDK 14. As its name implies, jpackage allows you to create a native installer from a JAR.

Its basic usage is straightforward:

On a macOS computer, the above command creates a RenamerAppKt-1.0.dmg installer. It contains a macOS application with the following structure: 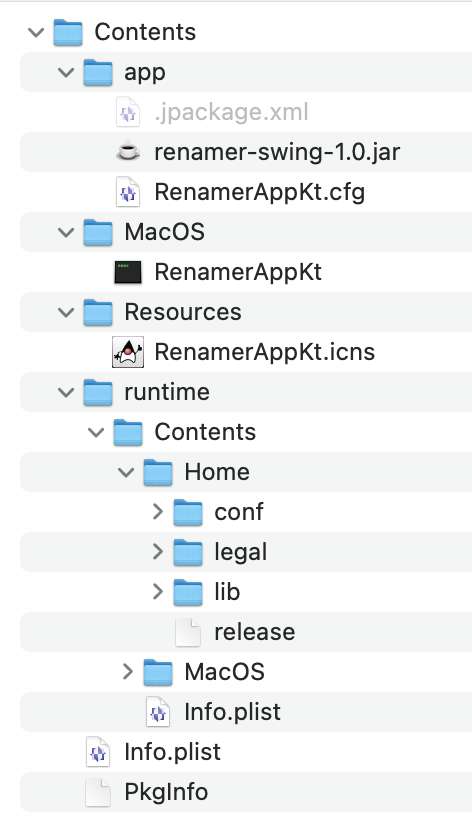 While the sample JAR is 1.5 MB, the installer is more than 50 MB because of the embedded Java runtime.

jlink is not a real distribution mechanism but I believe it still deserves a mention. It allows you to create a custom runtime with a dedicated launcher script for your applications. It's part of the JDK since Java 9.

While it can in theory work with any application, it shines with modularized applications. Such applications need to describe the modules they depend on in a module-info.java.

The main task is to modularize the application. For our sample app, the module-info.java file is:

Modularizing one's application is pretty straightforward. But to decide whether a JDK module will make it into the final runtime, jlink requires to transitively analyze every dependency of the application. Yet, about 35% of the libraries are neither modularized nor declare an Automatic-Module-Name in their MANIFEST.MF.

It's possible to add this information during one's build even though the procedure is error-prone and boring. The description on how to achieve this deserves a post on its own. For more information, please check this Oracle magazine article. Suffice to say here that it makes heavy use of the Moditect Maven plugin.

After having configured the POM, packaging the Renamer Swing application yields a folder that contains a runnable launcher script and the necessary modules from the JDK. 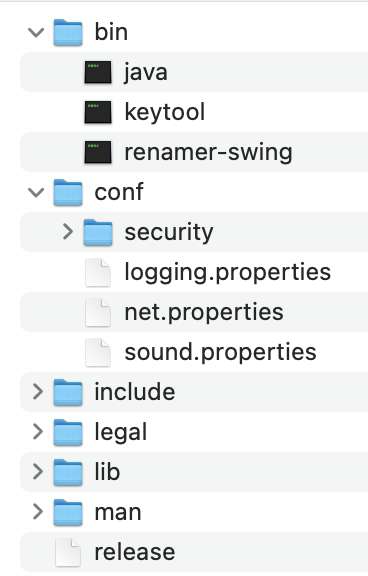 The folder size is around 86MB. By using gzip, you can reduce the size to about a 30MB archive that you can distribute.

Note that it will require users to decompress the archive and to know which script to launch, though.

Here are some other candidates that I discovered while researching this post. Note that I have experience with none of them but it might be useful for some of you.

In this post, we browsed through several options to distribute our Java desktop applications:

Originally published at A Java Geek on February 14th 2021