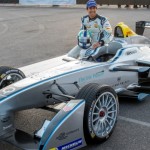 there has always been a competitive element to driverless car technology, with the annual darpa challenges testing entrants against a range of courses and challenges.

this competitive element has undoubtedly played a major role in the development of the technology, to the extent that driverless cars are now practically ready for commercial operations.

whilst the technology is far advanced, the legislative and social attitudes towards the concept is slightly less advanced.  can sport play a role in helping society come to terms with the thought of driverless technology?

the formula e championship is a motor racing series for electric vehicles.  it features 10 teams of two drivers, with the cars racing around city-center circuits.

the team behind formula e have joined forces with technology company kinetik to launch a new championship, only this time the racing will be done by automated vehicles.

the driverless championship will act as the warm up event for the formula e races on the same day, and will feature 10 teams of driverless vehicles racing on the same circuits as the human drivers will be using later on.

the series will go by the name roborace and will begin in the 2016-2017 season.  the ai guided races will be one hour in duration, although it isn’t clear at this stage whether teams will operate with the same ai or there will be competition between teams in that regard, although you would presume it’s the latter.

the kinetik team believe that the roborace will make the natural next step for motor racing, as human powered cars gain an increasing amount of ai support.

“in the future, all of the world’s vehicles will be assisted by ai and powered by electricity, thus improving the environment and road safety,” they say.

“roborace is a celebration of revolutionary technology and innovation that humanity has achieved.” they continue.

“robotic technologies and ai can co-exist with us in real life. anyone who is at the edge of this transformation now has a platform to show the advantages of their driverless solutions and this shall push the development of the technology.”

suffice to say, with the electronic racing circuit only a year old, it’s not clear just what role that has had in promoting the virtues of electric vehicles to a wider audience.

it’s difficult therefore to assess what impact this might have on our perceptions of automated vehicles, but it’s worth remembering the work of everett rogers, who proposed a number of variables behind the diffusion of innovations.

five variables behind the rate of innovation adoption

the new race series can certainly help with the first of these variables, and depending on the abilities of the ‘drivers’ it may even highlight the quality issues outlined in number 3.

it could, therefore, play a reasonable role in helping the concept of driverless cars crossover into the mainstream.  watch this space.