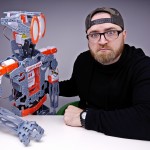 as robots have begun to play a more prominent role in our lives, there have been a number of studies exploring how we are accepting this ‘invasion’, and what might be done to improve our willingness to work and live with automated peers.

for instance, a study published earlier this year explored how senior citizens feel about having robotic helpers in care situations.  it found that the media had a big part to play in forging the perceptions people had of robots.

“when interfaces are designed to be almost human-like in their autonomy, seniors may react to them with fear, skepticism and other negative emotions,” the researchers say. “but, with those considerations in mind, there are actually several areas where older people would accept robot help.”

a second study , this time from researchers at lincoln university found that we don’t want our robots to be too perfect.  when the robots were programmed to make human-like errors, the feedback from participants was much higher.

“as long as a robot can show imperfections which are similar to those of humans during their interactions, we are confident that long-term human-robot relations can be developed,” they conclude.

a third study (pdf) , led by the same academic who led the initial study mentioned above, looked at how the construction of the robot influenced how we perceive it.

the study found that when we play a part in the construction of our robot, we tend to feel more warmly towards it.  just so long, that is, as the construction process isn’t so torturous that we wish the machine had never crossed our path.

“there is this so-called ikea effect, with consumer behavior research supporting the notion that when people assemble the products themselves, they feel a great sense of accomplishment and they see themselves reflected in the products they helped to build,” the authors say. “we guessed that if you find that effect in objects like furniture, you would find that effect in interactive media and especially robots.”

the study found that when we built our own robots, we had both a sense of accomplishment, but also felt greater ownership over our creation.

suffice to say, most robots aren’t going to be the kind that you can construct yourself, but the study provides another interesting glimpse into how we perceive our interactions with machines.

“one design implication in our findings is that robots should be customizable by individual users and the customization should go beyond the assembly stage,” the authors conclude. “while self-assembly can provide an initial sense of accomplishment, the sense of ownership can be sustained with tailoring options that users can continue to tinker with, long after the initial set up.”