As developers, we’re always looking for a shortcut or an easier way to hit the ground running, right? If you’re a team lead, getting your team on the same page, set up, and operating with minimal effort and pain is important. Docker can help.

In the realm of software development, there has always been a growing emphasis on modularization, from general principles such as single-responsibility to more concrete implementations such modularizing javascript functionality into stateless components. Here, I’ll show you how we can use Docker to modularize our development environment for a number of similar benefits, including helping us hit the ground running.

As you know, to get ramped up on a project, you have a checklist of to-dos:

Imagine if after pulling your application’s code base out of repository, you only had to run a few command lines (possibly as few as one) to get your entire application’s environment ready to go. Sounds cool, right?

That’s exactly what we’re out to accomplish. Instead of an encyclopedic approach to laying out all the features and commands of using Docker, I’ll cover the main features as we go through using Docker to containerize a developer’s environment.

This post is the first in a series on leveraging the power of containerization using Docker to easily build an applications development environment that can be shared and up and running in no time.

Docker Toolbox vs. Docker for X

Docker Toolbox was the original collection of tools available for working with a number of Docker resources and will vary depending on your OS of choice. But since then, they have released new Windows and Mac native applications. So in addition to the Linux, OS X and Windows Docker Toolbox variations, you will also see “Docker for Mac” and “Docker for Windows”.

To understand and decide which tool you should use, I wanted to outline the premise for the new native applications. The original Docker Toolbox would set up a number of tools along with the use of VirtualBox. It would also provision a virtual machine running on the Linux Hypervisor for either Windows or Mac.

VirtualBox, Hyper-V, and Hyperkit, O My!

The native applications, such as in the case of Docker for Mac, install an actual native OS X application. It also no longer uses VirtualBox but the OS X hypervisor hyperkit. Furthermore, shared interfaces and network is managed much simpler. There are also some user experience updates to the tooling used to work with Docker as well. These same changes are also apparent in the Docker for Windows native application, utilizing the Hyper-V hypervisor instead, along with the host of other similar network and tooling updates.

In the end, the experience is supposed to be a more positive, efficient experience as well as less error-prone. However, you will find a vast majority of external documentation related to the Toolbox – so it could be to your advantage to know about Toolbox.

This initial tutorial will simply use an out-of-the-box express.js application. When we get to live editing of source code and communicating between containers, I’ll move onto a more involved, universal React.js application running Webpack’s dev-server with hot module reloading, a MongoDB database and more.

In an effort to get to the goodies of using Docker and containerizing a developer environment along with a slew of various OS versions, I’ll leave it to you to download whichever Docker version (Toolbox or native) and OS you want to use:

TOOLBOX USERS: Docker Toolbox comes with a “Docker Quickstart Terminal” and is linked to the Docker environment when ran. However, it’s common to run a terminal separately OR within your IDE of choice. In order to interact with Docker from another terminal/prompt, you’ll need to initialize the Docker env by running “docker-machine env”. At the end of the displayed text is a command you will need to copy/paste from within that same terminal/prompt to initialize the Docker environment.

The next step is to obtain the source code of the development application you want to containerize.

For now, you can grab this project from GitHub that I’m using in this part of the tutorial to save a few steps.

Remember, the primary goal is to run our application in an isolated and modularized environment. In order to have Docker create that environment, we have to tell it how to create it. We do that with a set of instructions using a Docker Image File.

IMPORTANT: This Docker image file will allow us to create an image which will represent that containerized environment we’ve been talking about, and eventually create running instances of that image called containers. But we’re jumping ahead, more on this in Step 5.

Dockerfile is the default name that Docker looks for in an image file, but it can be any name, which we’ll see in a later step. These instructions inform Docker that we want to create an image:

TIP: Docker always requires a base image, keeping our images with as small of a footprint as possible is key. The alpine-node image is built on the extremely small (49.65mb) that includes both Node.js and NPM.

Now that we have a Docker image file, which specifies details about how to create an image, let’s stop and talk about what an Image is: 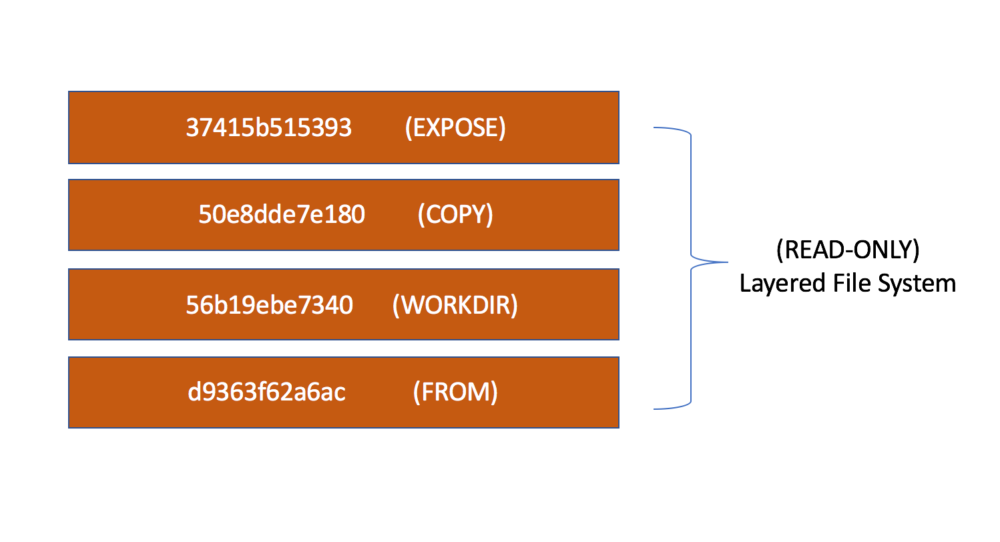 An image is a read-only layered file system. It makes up the base file system of the environment we keep eluding to. The image file we made in the previous step will instruct Docker on how to create each of these layers for the image we are going to create from that Dockerfile now.

But if it is a “read-only” filesystem, how are we going to write to it, (for instance, performing code changes to our application’s codebase during development)? Good question, I’ll answer that in an upcoming step.

TIP: For Docker Toolbox, running Docker commands from anywhere but the Docker Quickstart Terminal will result in an error (varies based on OS). In order to run commands from any random terminal/prompt, you’ll need to link up the terminal/prompt to the docker environment. Run docker-machine env, and run the command that it prompts such as e.g. “ @FOR /f “tokens=*” %i IN (‘docker-machine env’) DO @%i”

If all went as planned we should see (as in the .gif) a “successful build ….” message. We can now run a command you’ll come to memorize for showing your images:

In this case, our combined image is 61.26 MB in size which is a combined of the base alpine-node image and our express application layer.

If we want to see the file layers created for our image we can run the command:

Step 5: Running an Instance of our Image

Now that we have created an image, we are ready to create an isolated, modularized environment of our application. As I have alluded to a number of times, that environment is a Docker container. A docker container is actually a running instance of an image.

In concept alone, an image and container is very similar to how we would think of a Javascript Prototype or a OOP Class. So, let’s run an instance of the image we created

Step 5a: Generate and Run an Instance of the Image

We created and ran an instance of our express-prod-i image known as a container by:

NOTE: I used a different local port of 7000 to show you that you can map whatever unused port on the host machine to the internal port being exposed in the container.

Stopping a running container is easy as running the…you guessed it:

As we go through these tutorials, it could come in hand to drop an image or container and start over. Below are the steps to do so. In addition, further down under the Bonus section, there are a few helpful shortcuts:

To delete a container, we use the remove container “rm” command:

To get the container back, we can use the command we issued before:

To delete an image, we will use the remove image “rmi” command:

To get the image back, we can use the command we issued before:

TIP: The remove image and container commands can take the image or container ID and even just the first few characters of the ID. So you have the option to specify either. (You’ll also see that we do so in the Bonus section.)

In addition to the steps to delete images and containers, you can also utilize a few helpful shortcuts that have come in handy for me.

To delete all the containers, run the following remove “rm” command, but execute the command to return all of the containers within that command:

Windows Users: You will need a bash shell to run the following commands. Mainly because of the GNU make variable references $( ) we use. You can install something like “Bash on Ubuntu on Windows” or even GIT bash. Just remember that a you will need to link up your terminal by running docker-machine env and running the eval command that is listed at the end.

To delete all the images we can do something similar and use the remove images command “rmi”.

Production? I Thought We Were Building a Container for Application Development?

It doesn’t take a genius to notice that the image we just created we were notifying Express.js and Node.js that we want to run in production. So what’s the deal?

So, I’ve already dropped a bunch of knowledge about Docker. Creating an image file, building an image and generating a running container of that image. But we have a lot to go.

So in the next post in this series, I’ll tackle creating an image that will be our development version or our application, but based off our production image. We’ll also look at how we can leverage scripts in our container to help set up the local environment for making changes to our source code.