In the first part of the series, we got started by creating a base Docker image of our application and running an instance of that image (known as a container).  We also got to witness the Power of Grayskull…I mean, Docker!  We did all the typical setup and running of an application, not from our local host machine, but from within a container.  Continuing this Docker for Developers series, we’ll look at setting up an application development environment image that can be editable.

Docker for Developers: Getting Started

Our goal in this part of the tutorial is generating an image that will represent the development version of our application and set up the necessary components of a running container so that we can make changes to the file system and have them reflected in the container.

Let's create a new Docker image file in the root of our application that will be the instructions for our derived image:

We created a new docker image file that:

Instead of having our application initialize when the image is created, we’ll move that over to occur in our container.  Therefore, those application priming steps such as “npm install” will occur anytime the container is started:

NOTE: Remember, these containers are running in a Linux-based environment, so running the chmod system command will set the permissions for the specified file to executable, in this case the initialize.sh.

If you recall, we specified in the base express-prod-i image, to run the “npm install” command, which will have the installed NPM packages part of the container.  However here we:

Now, that we have a new Docker image file, we are ready to create an image.

Just as we did in the last tutorial lets create a new image:

Step 4: Generating and Running a Container with Volumes

We now have an image that will represent our development version of our application, which uses our production as a base.  We now want to run that container, but with something new: Volumes.

All along, you might have been wondering how we are going to edit source code and have it reflected in the running container if the sources code resides in the container, right?  That is one of the primary goals we set out to accomplish, is it not?
I mentioned before that images are a stack of differentiating read-only layered file systems. Where each layer adds to or replaces the layer below it. I have also mentioned that the container is a running instance of an image.  But it’s more than that.  A container provides a read-write layer to the underlying read-only file system of the image. 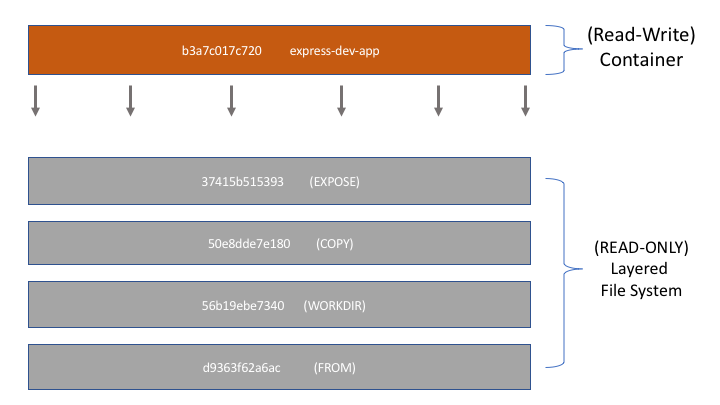 In order to combine these read and read-write layers together, Docker uses a Union File System. But state changes through the container are not reflected in the image. Any file changes reside strictly in the container. This poses a problem. When a container is brought offline, any changes will not be preserved in the underlying image that the container was instantiated from.

Therefore, to persist changes made through the container (along with other benefits) Docker developed Volumes. In short, volumes are directories or files that exists outside this Union File System and generally reside on the host (read: your computer) file system.

Now that we have an image representing the application development version, we are ready to create a container with a mounted volume on our host machine that points to the application’s source code local directory:

IMPORTANT: If you have run the application locally outside the container (e.g. node bin/www), the same command we set in the shell script  initialization.sh, and you have a local node_modules directory in the root of your folder, go ahead and delete that now.

NOTE: The value given to the volume -v flag is broken up as  host directory separated by ( : ) and followed by the container WORKDIR working directory.  This is only relevant to our setup, but the specified container directory doesn’t necessarily have to be the WORKDIR directory.

TIP: Volumes are not removed by default when a container is removed.  But you can specify the  -v flag with the docker remove ( rm) to remove associated volumes “ docker rm -v [name or ID of container]”.

Step 4b: Validate That the Container Is Running

If everything went as planned, you should have seen in your terminal/prompt the results of the npm install being run with the listing of node modules being installed. I specifically left out the detached -d flag so that this could be witnessed.

If none are listed, you can add the ALL -a flag to the above command to show all containers and see if there is a listed exit error for the “express-dev-app” container. 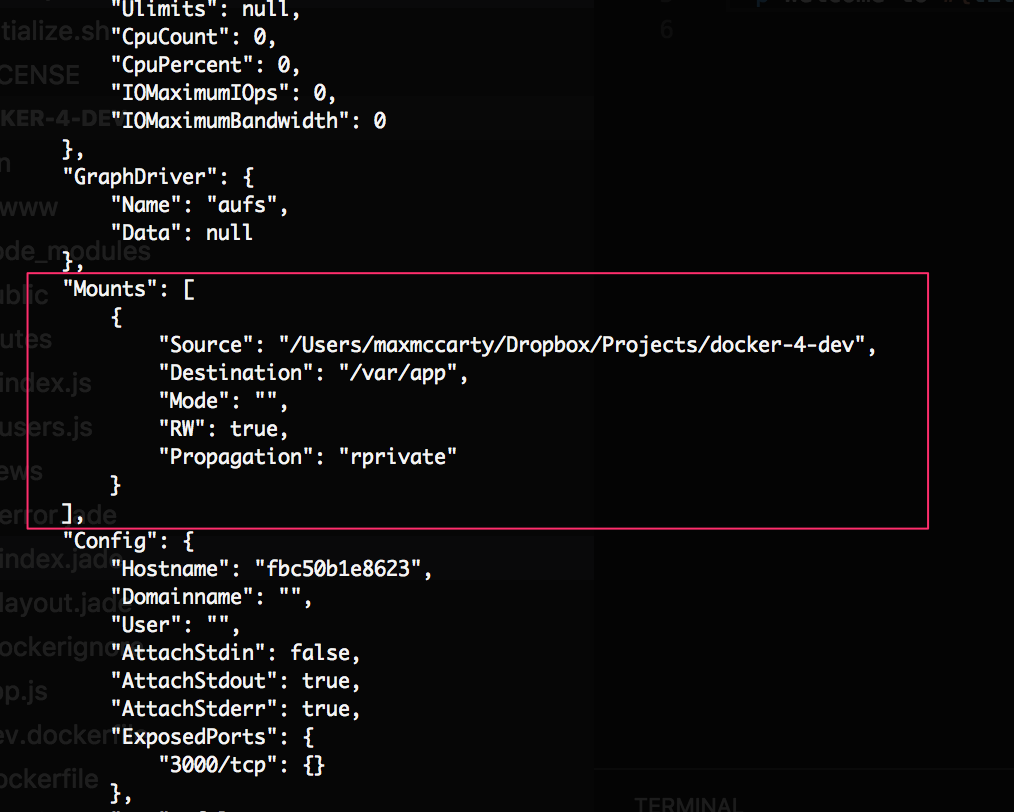 This is the moment you have been waiting for. We’ll jump right in and see how we can make source code changes locally and see them reflected in the container.

IMPORTANT: Make sure to check out step 6 for some great tips, commands, and explanation as to what is going on with the mounted local source code and the container.

We didn’t have to rebuild or even restart the container to see our simple, yet powerful changes to the front-end client of the express app reflected in the container our Express.js application.

Changes that are required to host a running a node.js application, such as installing all dependency node modules, are reflected locally through the mounted volume we created.

Step 6a: Interacting With the Container

We can verify that by connecting to the running container. We can open a bash shell on the container and examine information about the working directory.

We didn’t start the container in a detached mode, so you either need to stop the running container and restart using the Docker start command as seen in the previous tutorial, or you’ll need to open a new terminal/prompt and connect by:

The gravity of what we accomplished in this Docker for Developer tutorial seems simple, yet it’s extremely powerful.  We are modularizing our applications setup to a container that hosts all the application’s necessary setup, while maintaining control over the source code that is running our application in the container.

We’ve only cracked the surface of how and what we can do regarding application development and the use of containerization with Docker. In the next tutorial, we’ll take the training wheels off and get serious by using and running a Universal (isomorphic) React.js application with hot module reloading in a container.