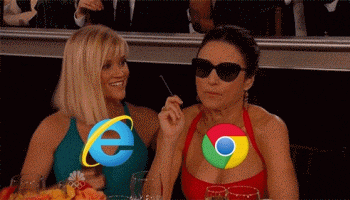 A question that has been on the back of minds for many web developers and testers who are involved in cross-browser testing.

We are into 2020 and it has been more than 6 years since Internet Explorer last received an upgrade from Microsoft. On 1/12/2016, Microsoft ended support for IE10 and older versions. That means the only IE version that is receiving security updates, compatibility fixes from Microsoft is IE 11. The support applies on Windows 7, 8.1, and 10. Microsoft even published a webpage, prompting its users to update IE10 or older versions to IE11.

You may also like: Top Tips for Better Cross-Browser Testing

Internet Explorer once dominated the browser market share but that was a long time back. Ever since Google Chrome was introduced, it continued to rise in popularity and dethroned IE by gaining more market share in 2012-2013.

As the browser market share continued to fall in the last decade. The web developer and web testers started questioning the involvement of IE for their cross-browser compatibility projects. Microsoft wants to gain market share with its modern Edge browser. How is Edge performing in comparison to IE?

Why Is Internet Explorer Doomed?

Internet Explorer is one of the oldest browsers in the market. Back when it was launched it turned out to be a favorite for the majority of internet users. However, there was one major drawback with IE, it never followed the norms and web standards of W3C(World Wide Web Consortium). This made Internet Explorer a headache for developers when web development evolved over the years.

Failing to comply with W3C standards was the root cause of the majority of cross-browser compatibility issues. As modern browsers entered the landscape of Browser Wars, the focus from Internet Explorer began to drop gradually but evidently.

This was not the only reason that led to IE’s demise. Other reasons were:

Eventually, IE got ruled out by the developer’s community. A large number of threads in various discussion forums around IE have become outdated. Now, there are hardly any new threads where developers or testers are intrigued about Internet Explorer.

Microsoft introduced a new browser called Microsoft Edge in 2015 for Windows and Xbox. It was later made available for Android and iOS in 2017; however, after a catastrophic failure of Internet Explorer, gaining market share for the Edge browser has been a tough road for Microsoft. As you can see from the market share graph shared below from Statcounter, Edge has finally caught up to IE. 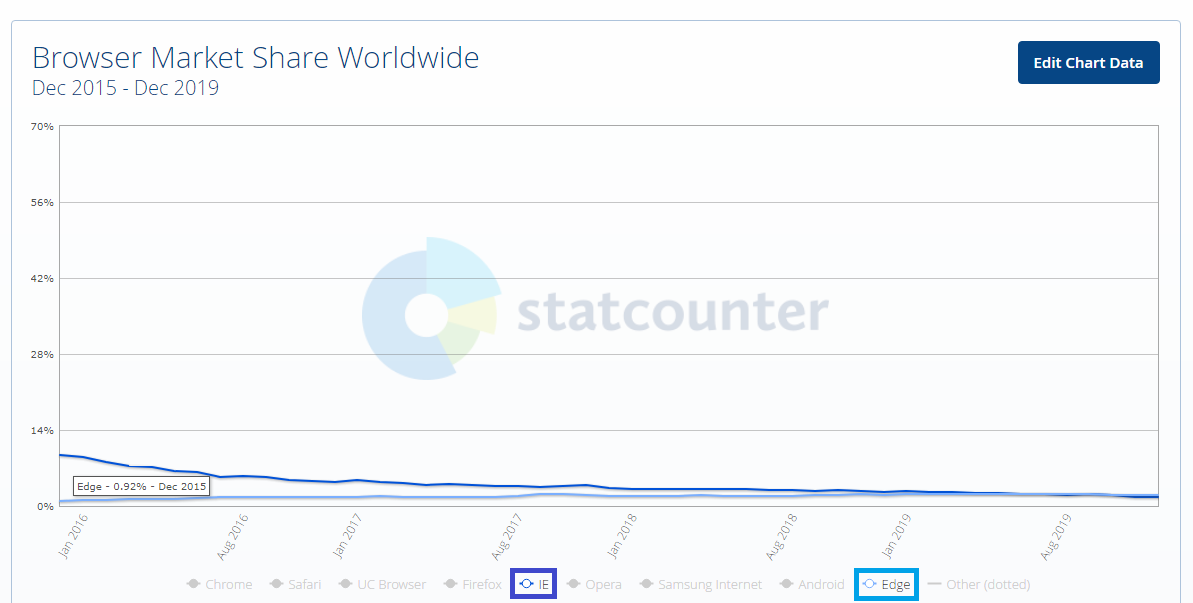 Why Is Internet Explorer Still Being Used?

These are the primary reasons for companies using Internet Explorer.

What About The Older Versions Of Internet Explorer?

As per United States DAP(Digital Analytics Program), the government websites were visited by 3.49 billion over the last 90 days. Here is a breakdown. 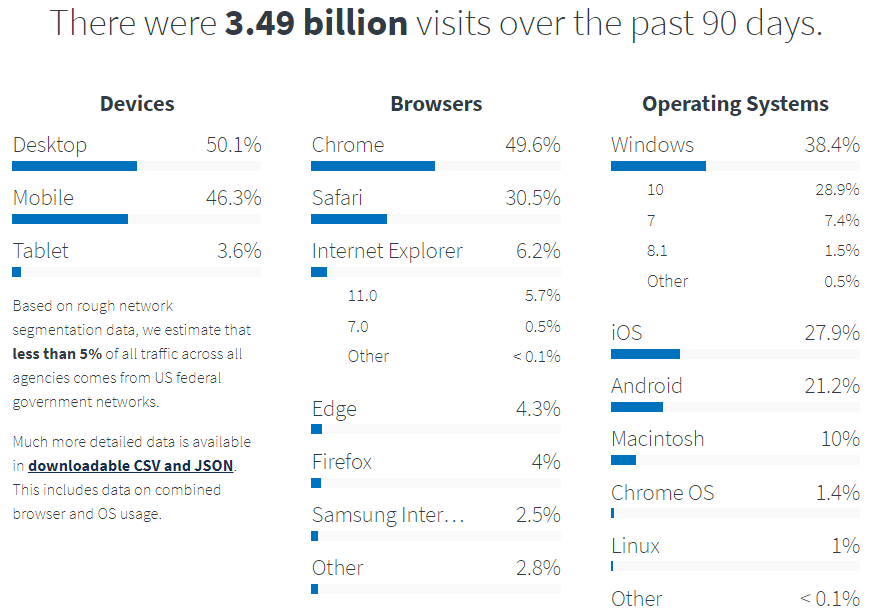 So you can have a fair idea about which IE versions to target for browser compatibility testing depending upon different countries you are planning to run your business from.

Nonetheless, you can hardly expect someone to use Internet Explorer as their default browser. You may also be wondering what might happen to Edge as it was already troubled by the downfall of IE. Well, it seems like Microsoft had some plans ready for the Edge browser.

Will Chromium-Based Edge Browser Be The Game Changer For Microsoft?

Switching to Chromium will definitely help them align better with modern web standards and developer communities; however, it is not going to be easy!

The below comment on an official blog post of Microsoft implies that Developers are going to have a hard time relying on the new Microsoft Edge browsers.

How Do Our Fellow Testers Feel About Internet Explorer?

As we were nearing the end of 2019, we thought of asking our audience about their take on IE. Do they still incorporate IE in their browser compatibility testing? And turns out that even in its last legs, IE is still a part of QA’s checklist.

When polled on Instagram, 75% of voters were in favor of keeping IE in their cross-browser testing checklist. 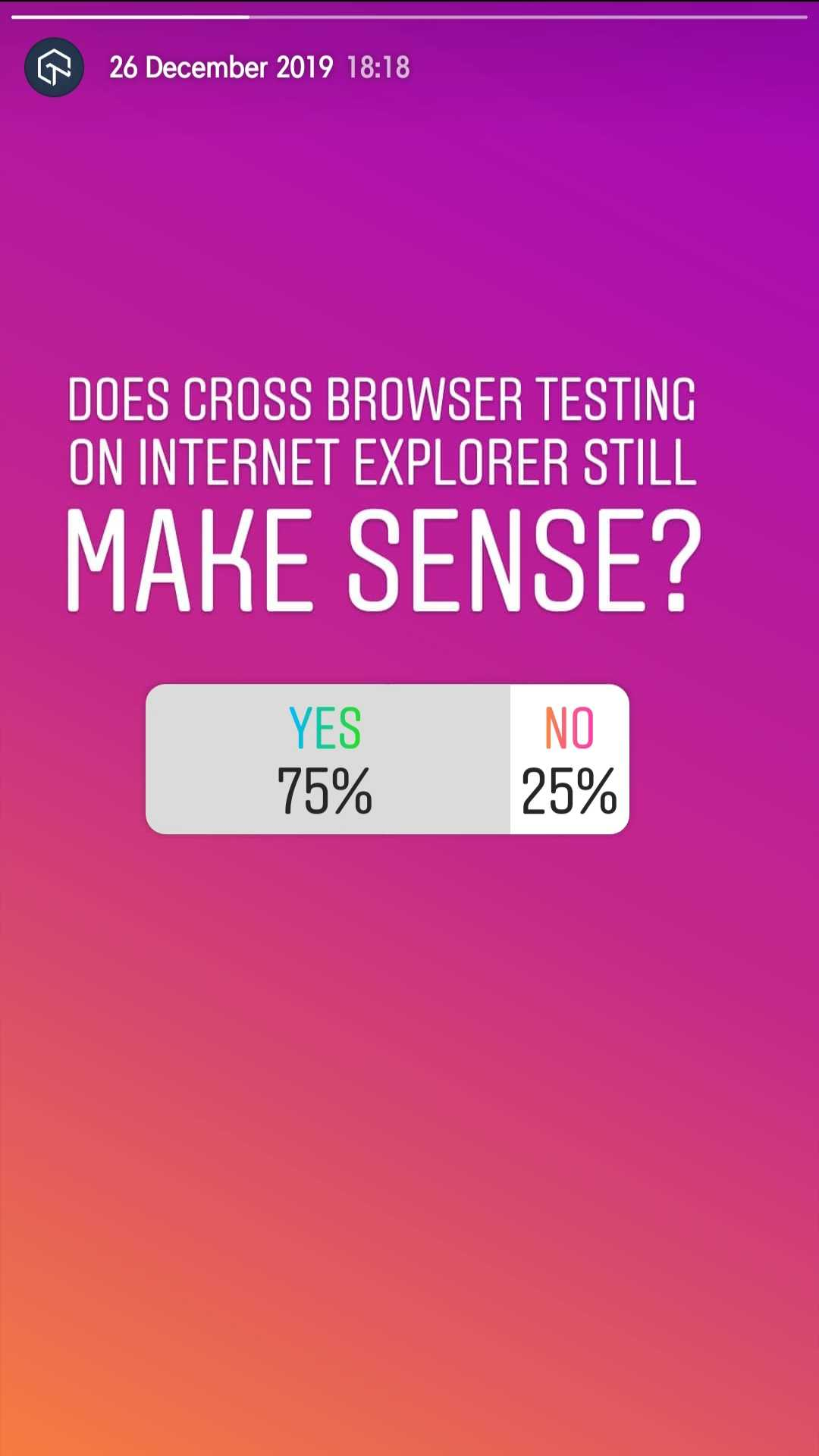 Problem Statement: How Do I Test On IE From MacOS?

If you ask someone who is involved in the cross-browser testing domain about their question of the decade, they can pretty much come up with this one.

Being developed by Microsoft, Internet Explorer was taken away from the macOS devices. And now you can’t even download it from the internet! So how do you accomplish your cross-browser testing coverage if you have a macOS on you?

Thanks to these alternatives, you can go ahead and test your web-application on Internet explorer even if you have a macOS.

Curious to know how? We have written a detailed article to help you get started with the above options to test IE on macOS.

Internet Explorer was bound to fail by not adhering to W3C standards. The wave of modern web browsers ended up stomping the IE browser market share really hard. Consequently, Microsoft afraid to lose its market share entirely to modern browsers came up with a new browser called Microsoft Edge. Microsoft Edge was meant to help Microsoft claim the glory. On the contrary, it ended up struggling to even catch up to the fallen IE in the market share.

Internet Explorer may be on its last legs, but it is not going to completely vanish anytime soon. Especially, considering the reasons for which it is still being used in the corporate world, the healthcare sector, government websites, and more!

The chromium-based Edge browser is supposed to pack a punch. How will it deliver? Only time can tell. However, we can tell you this from a cross-browser testing perspective, that the transition is going to be soothing for the developers and testers!

When asked from our community on an Instagram poll, the majority leaned towards incorporate Internet Explorer in the cross-browser testing checklist. How do you test IE on macOS?

Your best bet would be cross-browser testing tools such as LambdaTest which allows you to test on 2000+ real browser hosted on the cloud without having you worried about the local infrastructure or latest browser version updates.

14 Ways In Which Cross-Browser Testing Ensures A Better UX