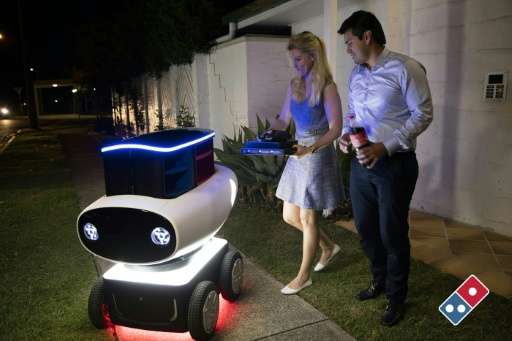 Late last year I wrote about a new project by Starship Technologies to develop a land based drone for deliveries.  The hope is that as the robots are very much earthbound, they will get away from many of the concerns currently facing drone based delivery services.

Each device is equipped with an array of cameras and sensors, with navigation achieved via internal navigation and obstacle avoidance software, with the robot capable of travelling at 4 miles per hour.

Interestingly, the team claim that the robot is primarily autonomous, and is therefore capable of safely navigating the congested environs of your average pavement without harming pedestrians.

The project was met with a healthy dose of cynicism, but it appears it may be coming to fruition in New Zealand.  Pizza company Domino’s are said to be trialling a land-based drone for delivering pizzas to customers.

The four-wheeled device, which has been developed in Australia, is around a meter tall and contains a heated compartment for up to 10 pizzas.

The machine is battery powered, and just as with the Starship Technologies machine, comes complete with sensors to ensure it doesn’t run into anything.  The battery gives the device a range of around 20km before it needs recharging.

Each customer has a code that they then use to unlock the compartment and get to their pizza when it arrives.

The date for the trial has yet to be set, but the team at Starship Technologies are one-step ahead.  They recently announced a trial of their drones in Greenwich, London, which suggests that these peculiar looking devices might be coming to a town near you sooner rather than later.