In the previous article, we discussed Spark for big data and showed you how to set it up on Alibaba Cloud.

In this blog series, we will walk you through the basics of Hive, including table creation and other underlying concepts for big data applications.

"Our ability to do great things with data will make a real difference in every aspect of our lives," Jennifer Pahlka

The Case for Hive

As discussed in our previous article, Hadoop is a vast array of tools and technologies and at this point, it is more convenient to deploy Hive and Pig. Hive has its advantages over Pig, especially since it can make data reporting and analyzing easier through warehousing.

Hive is built on top of Hadoop and is used for querying and analysis of data that is stored in HDFS. It is a tool that helps programmers analyze large data sets and access the data easily with the help of a query language called HiveQL. This language internally converts the SQL-like queries into MapReduce jobs for deploying it on Hadoop.

We also have Impala at this standpoint, which is quite commonly heard along with Hive, but if you watch keenly, Hive has its own space in the market place and hence it has better support too. Impala is also a query engine built on top of Hadoop. It makes use of existing Hive as many Hadoop users already have it in place to perform batch-oriented jobs.

The main goal of Impala is to make fast and efficient operations through SQL. Integrating Hive with Impala gives users an advantage to use either Hive or Impala for processing or to create tables. Impala uses a language called ImpalaQL which is a subset of HiveQL. In this article, we will focus on Hive.

Relational databases are of "Schema on Read and Schema on Write", where functions like Insertions, Updates, and Modifications can be performed. By borrowing the concept of "write once read many (WORM)", Hive was designed based on "Schema on Read only". A typical Hive query runs on multiple Data Nodes and hence it was tough to update and modify data across multiple nodes. But this has been sorted out in the latest versions of Hive.

Serializer/Deserializer in Hive or Hive SerDe is used for the purpose of IO, which can handle both serialization and deserialization in Hive. There are different types of SerDe like native SerDe and custom SerDe with which you can create tables. If the ROW FORMAT is not specified, then use native SerDe. Apart from different types of SerDe and we can also write our own SerDe for our own data formats. At this initial stage, we will just get familiar with this concept, as it is something important to concentrate in Hive.

To recollect, whatever file you write to HDFS, it is just stored as a file over there. Here comes Hive, which can impose structure on different data formats. The points below elaborate on initiating a hive shell, its usage, and some basic queries to start with and understand the working of Hive.

Log in to the Alibaba Cloud master Elastic Compue Service (ECS) Instance, and just type "hive," which leads to a screen as shown below. If you have configured Hive to run on a different worker node rather than the master, then login to that particular host and open the hive shell.

Let's look through some basic queries in HiveQL. The very first is creating a table in Hive.

In our case, let's try creating a table with the columns present in the tripadvisor_merged sheet.

For the same case, let's try creating an Avro table, as we have been speaking about this file format in the entire blog series for its best performance.

Now let's insert the data into the Avro table using insert statement. Below is a sample insert query for Avro table.

Similarly, create all columns for the columns in the file and create a corresponding insert statement to insert the data into the created tables 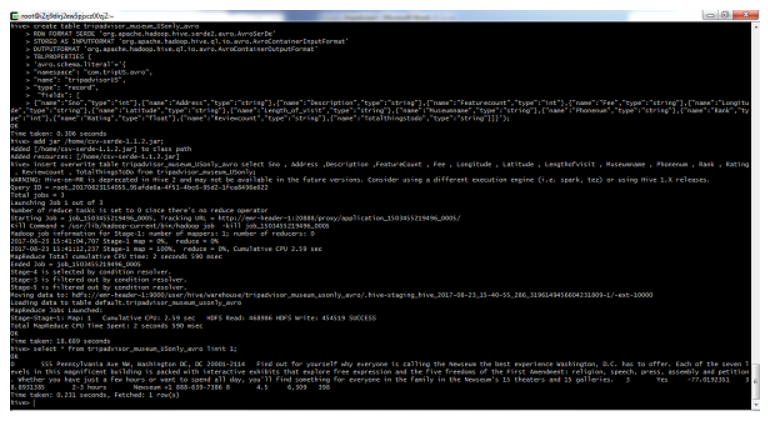 Generally, after creating a table in SQL, we used to insert data using the Insert statement. But in Hive, we can insert an entire dataset using the "LOAD DATA" statement.

To use Alibaba Cloud Object Storage Service (OSS) as storage in Hive, create an External table as follows

For example, write a script for creating an external table and save it as hiveDemo.sql. Once done, upload it to OSS

When Is Hive Not Suitable?

How to Perform Joins in Apache Hive