As some of you are aware, the Java EE Guardians and DZone jointly conducted a community survey to help determine Java EE 8 features prior to JavaOne 2016. You may also be aware that we shared the results of that survey with Oracle before the details of the renewed Java EE 8 scope was announced. Now is a great time to start analyzing those results a bit more. I've already done a high-level summary of the results. I've also done a deeper dive into the responses for HTTP/2 and Servlet 4, Java SE 8 alignment, as well as Java EE security.

Besides asking about relatively straightforward Java EE 8 features, we asked a number of more complex, foundational questions towards the end of the survey. In the prior entry, in this entry, and a subsequent few others, I am going to take a closer look at some of these questions. I'll then return back to looking at the more mundane Java EE 8 feature-specific questions. It will be clear in a few weeks why this change of order is important at the moment.

In the prior entry, I looked at one of the most fundamental questions we asked — the complex relationship between standards and innovation. If you have not yet read the entry, I think it is a good idea to take a look, as it provides vital context to the current entry. In this entry, I'll explore the question we asked about standardizing microservices specific features in Java EE. This is a particularly important question that deserves a very in-depth look. It is certainly a question Oracle, vendors, the community, and Java EE's usual antagonists are paying a lot of attention to, so getting this right for everyone is crucial.

Here is how we phrased the question:

"Microservices is a relatively vague term. It can be interpreted to mean decomposing a larger logical application into smaller independently deployable subsystems.
There are frameworks that claim to specialize in microservices and include features such as custom configured, self-contained executable jars (also known as “fat JARs” or “uber JARs”), metrics, discovery, circuit breakers and bulkheads. Java EE currently does not include such features but it may make sense to add them. It should be noted however that Java EE centric tools such as WildFly Swarm, Payara Micro, WebSphere Liberty and KumuluzEE do offer such features.
Keep in mind, there are some industry thinkers like Martin Fowler that have expressed doubt whether microservices make sense for most applications. Some other folks such as Adam Bien believe Java EE is already well suited to building practical microservices.
How should Java EE approach microservices?"

Digging a little deeper into the data, there is a high degree of correlation between folks that support more microservices features in Java EE right away and folks that equate Java EE to a product instead of an open standard or don't mind standardizing concepts that would very likely be considered Hype-Driven Development (HDD) by most ordinary developers in the blue-collar enterprise (the very readable, extremely unassuming and sensible HDD write-up tellingly includes microservices, NoSQL, and reactive programming as prominent examples; if you haven't done so already, I highly recommend reading the linked article). In effect, these folks would not agree with the currently fairly conservative approach to Java EE standardization.

A majority of the people that put in comments essentially had a pretty ambivalent view of adding more microservices features to Java EE right now. Perhaps the folks who have decided to advocate for microservices a few years now without many reservations should pay heed to folks like these? Here is a representative sample of comments:

I don't think there is any denying the fact that Oracle's own Java EE 8/9 survey was heavily (perhaps even solely) focused on microservices, including the way the questions were phrased as well as the questions themselves (you should judge for yourself: the survey text and results are here). One would expect that support for microservices would be much higher in those results than our survey as a result. I don't think that is what actually happened. Most of the very microservice specific features such as service health, circuit breakers, and modularity/fat-JARs ranked below average (that is below 10 amongst 21 items surveyed, in order of importance). Indeed, most of the items that ranked above a 4 were pretty mundane items like HTTP/2, REST, JSON, security, and configuration. For context, 1 indicated "Not Important" while 5 indicated "Very Important." Items such a reactive programming, eventual consistency, and NoSQL all ranked between 3.5 and 4. 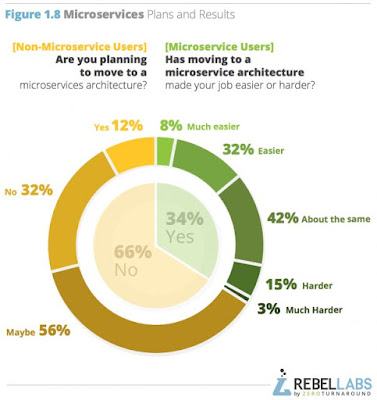 I think this is hardly the results to thrill the veritable chorus of vendors and "industry thought leaders" unabashedly cheerleading microservices for a while now.

The fact that ordinary developers still continue to have mixed feelings about microservices is not a surprise either to me or most folks I know personally in the community. There has been and continues to be a steady stream of people duly warning against the hype. One has to give due credit to Martin Fowler. He was one of the earliest prominent folks to write about microservices but he is also one of the earliest folks to warn about the hype. I don't think you can get any clearer about what is going on than saying "enough to get everyone's over-hyped-bulls*#% detector up and flashing" or "the majority of software systems should be built as a single monolithic application". There have even been some pretty brave folks on the vendor side on the equation. Ruby and Rails creator David Heinemeier Hansson wrote an excellent blog entry titled "The Majestic Monolith" that is well worth reading for all server-side developers. My friend and fellow Java EE enthusiast Adam Bien has even gone as far as to making a fairly bold prediction of a backlash against microservices and uber jars as soon as this year. There is plenty more around once you begin looking including some humorous but pretty insightful memes from ordinary folks. 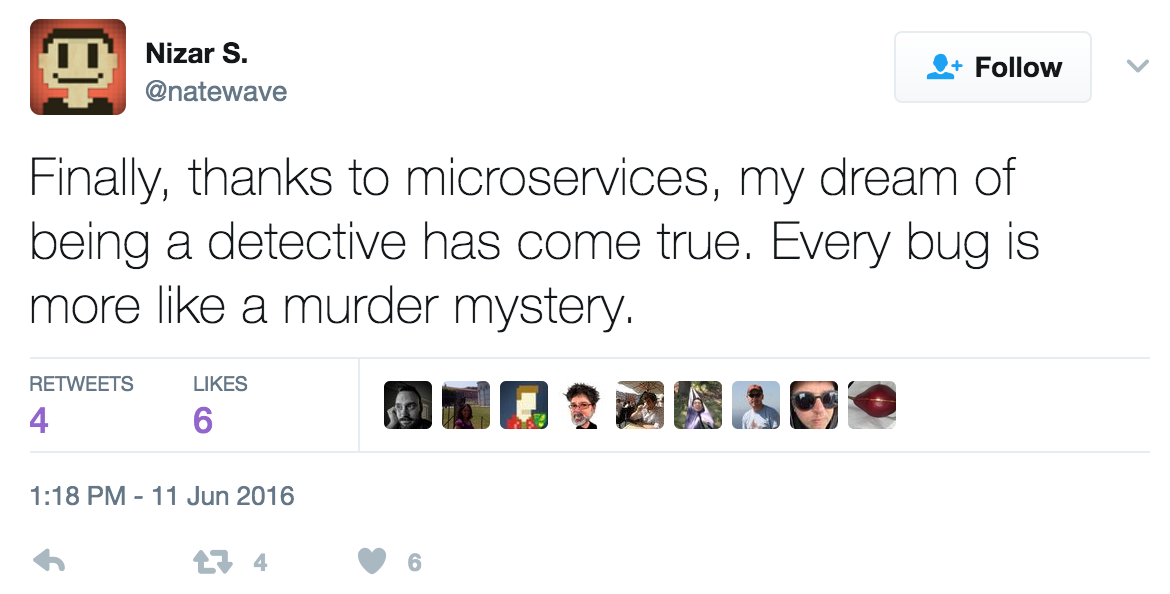 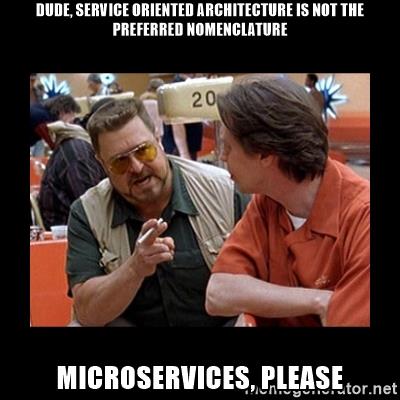 It is safe to say like these folks, I don't mind being called a microservices skeptic. While I'm sure it doesn't help our egos much, I don't think most companies have the same problems as Netflix, Amazon or Google (and yes, that includes most Fortune 500s). For the vast majority of applications out there, microservices seriously violate the YAGNI principle - the associated costs and complexities are just not worth it and never will be. My general rule of thumb for considering microservices for most real world projects is a team size of about 7-10 active developers.

For projects that can actually benefit from microservices, the "micro" part of microservices still violates the YAGNI principle. Indeed what makes sense is breaking these systems down into pretty sizable sub-systems with distinct sets of business users. An example would be a larger insurance system that is broken down into point-of-sale, data capture, underwriting, policy management, payments, customer service, reporting, archival, etc sub-systems. The reality is that many of us have been successfully developing both these types of "microservices" applications in addition to monolithic applications with vanilla Java EE for a long time now.

This pragmatic approach is far away from the CORBA-like remote objects most microservices proponents seem to have an infatuation with where you would see dozens if not hundreds of distributed remote services comprising an application like account service, product service, user service or order service. There are only a tiny handful of companies that actually benefit from this level of granularity. These are the types of applications that really need the features that are offered by products like WildFly Swarm or KumuluzEE beyond what vanilla Java EE already offers. I've explained all of this in a fair amount of detail beyond what I have the space to say here in the screencast I referenced earlier in this entry.

What Should be Done in Java EE?

Whatever the right thing to do in Java EE is, Java EE vendors should not let microservices hype pass them by. They should absolutely make sure their Java EE centric products are microservices "buzzword compliant". Part of the issue is that it will take a while for pseudo-technical people in IT decision making roles that nonetheless hold CIO, CTO, architect and development manager titles (some of us lovingly call these people "PowerPoint Architects"; I'm sure you know the type) to be able to separate the hype vs. reality of microservices. Some may only learn the hard way by experiencing project failures, cost overruns and maintenance headaches themselves. We have to be honest with the fact that Java EE is not completely immune from the need for buzzword compliance either. That said if Java EE capitulates every time the hype of the day came along, it would quickly lose it's well-recognized core value proposition as a stable, backwards-compatible open standard that serves as a buffer against hype and minimalist core for broad ecosystem innovation (indeed this is precisely what went wrong in the J2EE era).

I really don't think most of the features that Oracle is proposing for Java EE 9 really should be standardized yet. This includes things like dynamic discovery, metrics, circuit breakers, client-side load-balancing, eventual consistency and so on. Just as is the case with WildFly Swarm and KumuluzEE, at this stage vendors should be actively innovating with and building on top of Java EE for these sorts of features. Collaboration on microservices features through open source initiatives like MicroProfile is also an extremely good thing. This approach allows for the usability and applicability of these features to be much better understood and allows ample space for the ecosystem to fully innovate before any standardization takes place. Maintaining a product-first approach also means these features get to developers faster, as they need to meet (real or imagined) needs. Mutual collaboration through MicroProfile also allows for rapid standardization later when the time is right. On the other hand, if the microservices ambivalence now in conference talks like "Microservices for Mere Mortals" and "The Dark Side of Microservices" turns into a full-scale grassroots backlash down the road, these features need never be standardized in Java EE. I'd say the biggest problem now is that Oracle is not part of MicroProfile and does not have an open, collaborative microservices product plan outside of what they said they wish to do in Java EE 9.

None of the above means there aren't features that shouldn't be moved forward in the core open standard. There are plenty of more straightforward Java EE features that I think would be welcomed well by the community:

Going forward, the positions in this section is what I plan to personally advocate in the Java EE expert group. That said, there is always ample room for learning more in our ever volatile industry and perhaps my views will evolve over time as things continue to move forward.

I do hope this post serves as food for thought in the complex topic of Java EE and microservices. Please do stay tuned as I further look at topics in the survey. In addition to my write-up, I would encourage you to look at the survey results yourself and get involved in Java EE. You can certainly do so by becoming a part of the Java EE Guardians.